1) It is SATURDAY, FEBRUARY 20. Here us a really meaty Rolling Stone piece on why Mike Love (of the Beach Boys) is considered such an a--hole. Recommended reading. 2) Been away a few days (we have something on our journey here below). Still not back in the paper, but happy to be back in the blog saddle. 3) In The Previous Blogpost (ITPB): The G.O.A.T. of all Miami championship teams with poll, Chris Bosh's latest health scare & more. 4) Follow us on Twitter @gregcote. Also on Facebook, Instagram, Vine and Periscope.

Heat minor players at trade deadline: Miami traded guard Brian Roberts and a future second-round draft pick to Portland for cash, after earlier acquiring him in the Birdman Andersen deal. Heat also dealt Jarnell Stokes to New Orleans in a salary dump of a bit-part player. Both minor deals that barely rate the transactions wire.

WHAT IS YOUR CONCERN LEVEL ON BOSH'S HEALTH AND HEAT FUTURE?: Blood clots can be akin to cancer in that they may disappear with treatment but then reappear. Remission can turn to

relapse. It has happened to Heat star Chris Bosh, who missed the last half of last season with blood clots on his lungs and now is sidelined again, indefinitely, after the detection of a new clot in his calf. Naturally, abundant caution is being taken and no one yet knows (or is saying) when Bosh might return to the lineup. It may be soon, or he could miss the rest of the season. We just don't know. Likewise, we cannot know if the latest health scare will be the last to interrupt Bosh's NBA career, or if this is an issue that possibly could end his career prematurely. Two factors make Bosh prone to a clot reappearance: his height (6-11), which makes circulatkion more difficult, and the long plane flights that are a part of the job. A fear of the calf clot spreading could necessitate a level of blood thinner that could cause Bosh to miss the rest of the season. If the need for those thinners is seen as permanent, the condition could be career-threatening. For now, in the void of not knowing, all we can do is express our level of concern as we wish Bosh the best -- thinking of the man, husband and father first, and the basketball player and Heat second. What is your level of concern? Take a dip in our poll and say why.

KIPER EXPLAINS HIS NEWEST GUESS PICK FOR DOLPHINS IN DRAFT: ESPN's Mel Kiper is out with his second of 4,811 NFL mock drafts (click here to see it in full) and two things jump out. First,

he has Ohio State DE Joey Bosa of St. Thomas Aquinas slipping to sixth overall. Second, at NO. 8 overall for Miami, he now has the Dolphins selecting Notre Dame OT Ronnie Stanley (pictured). Sayeth Mel: "Adam Gase will be charged with getting Ryan Tannehill back on track, and getting a potentially elite tackle is a good way to aid in that process, as sacks have plagued Tannehill throughout his career thus far. Stanley returned to Notre Dame and made himself more NFL-ready. The Dolphins would benefit if he's available here." Sayeth me: I doubt it. In Branden Albert and Ja'Wuan James the Dolphins have solid starting tackles, and Miami cannot afford the luxury of drafting in the first round for depth or competition. I'd call Florida Gators CB Vernon Hargreaves a far likelier (and more sensible) 1R pick for Miami at this point.

On chatty Greg Jennings: Dude has lots to say for a guy who caught 19 passes, was a big disappointment and probably won't be back with the Dolphins. He's made a cottage industry of blatting about the state of QB Ryan Tannehill, a topic surely of minimal interest outside Miami. The latest: Jennings on ESPN2’s First Take, asked how far Tannehill is from elite, saying: "Don’t know. With saying I don’t know I guess I’m saying he’s far [away]. I’m being honest. None of us know. I’ve made the statements about them babying him thus far. It’s like he’s been handcuffed. He hasn’t been given the liberty. Until the end of the season when there was a coordinator change, he was not allowed to check out of a play. If you don’t let me be who I am, who you drafted me to be, you don’t trust me." What Jennings says, every Dolfan knows. Tannehill is the mystery new coach Adam Gase must unlock. That Tannehill remains that after four years is why there is a new coach.

MANNY PACQUIAO GETS A LESSON IN REALITY: Nike dropped aging boxer Manny Pacquiao in reaction to his religion-based criticism of same-sex marriage, calling people who do such things "worse than animals." I believe in freedom of speech, as long as you believe in consequences. Pacquiao has every right to feel as he does about gays and their civil and human rights, and to express those views. Just as society (or business partners like Nike) have every right to repudiate those views and remarks as out of step with fairness and a belief in diversity. What he believes is a doctrine of Bible-based faith, I happen to believe is bigoted and wrong. We are all entitled to our views. Unfortunately, there is little room for middle ground, compromise or discussion, is there? I wonder if God ever intended the Bible to become so divisive? Or likewise if the framers of the Constitution every imaged that doctrine also would become so polarizing? Doubtful on both.

WHAT WERE YOU THINKING, SAM BRUCE?: So receiver Sam Bruce abruptly withdraws from St. Thomas Aquinas High after it is revealed he sent a threatening photo of himself with a gun to a former classmate who had been involved with the same girl. The other kid called the cops. It should be noted Bruce (pictured) has not been charged with a crime, in that stupidity is not yet a crime. (Oh, if only!) This is only notable news because Bruce is a major part of the Miami Hurricanes' incoming 2016 recruuting class. It raises a red flag. Why does a teenager even have a gun to pose with? I'd be concerned if I were UM coach Mark Richt. The larger view is to again wonder what it is about athletes and guns? It seems to be a part of the football culture. We see it with adults in the NFL and that's sad enough, but not as sad as when we see it with kids making the move from high school to college. 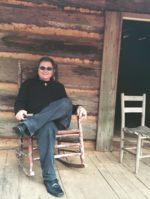 WHAT GREG COTE DOES ON A BRIEF HOLIDAY: We spent Sunday though Wednesday in Georgia, flying into Atlanta, renting a vehicle and driving about 90 miles north into the Big Canoe area, where friends who were away had invited us to stay in their mountain chalet. Idyllic! Did a lot of exploring, driving into surrounding small towns. Also spent much of a day hiking to Lower Falls, a gorgeous, huge waterfall. We found an abandoned cabin en route and I am pictured on the front porch violating two rules of the great outdoors. 1) I am hiking in dress shoes. 2) I am smoking a cigar in a forest. Anyway. Great time, no fires. Spent the final day in Atlanta, visiting the Georgia Aquarium (which made me lament that South Florida of all places does not have a world-class aquarium), and also the historic Oakland Cemetery. Yes, I am a graveyard junkie, a macabre hobby my wife indulges. The notable deceased there include Margaret Mitchell (1900-1949), the Gone With the Wind author, on whose unassuming tombstone rested a single flower and two pens. Nice touch.