PETE ROSE HAS DONE HIS TIME. PUT HIM ON HALL OF FAME BALLOT, ALREADY!: That headline summarizes my latest column; click on Rose's Purgatory Should End to read in full. You can see what’s coming in the case of MLB vs. Rose. You can guess how one of the most protracted sagas in American sports history will finally end. Rose’s lifetime ban from the sport will end when his life does. He will find forgiveness in death. The sport will welcome back its wayward son by inducting him posthumously into the Hall of Fame in Cooperstown. That 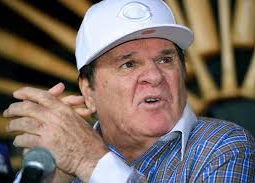 day, he’ll get the eulogy makeover. It will no longer be about his gambling problem way back in the late 1980s. Then it will be about the record 4,256 base hits. It will be about the man nicknamed "Charlie Hustle" sliding headfirst into history. What a shame to wait. How harshly and unnecessarily punitive baseball is being in its unwillingness to forgive. New commissioner Rob Manfred had the chance this week, in considering Rose’s appeal of his banishment, to say, "Enough." Instead, in affirming the ban would go on, Manfred all but assured that Rose, now 74, would die still ostracized. People convicted of murder in the U.S. serve an average prison sentence of 20 years 8 months, according to Department of Justice. Rose is still doing time more than 26 years later for betting on baseball games, including his own team, while managing the Cincinnati Reds. It is essential to note the Dowd Report found Rose only bet on his team to win. So there was never the suggestion of a scandal involving game fixing. What he did violated the sport’s rules against gambling, but hasn’t he served enough time? Lifetime sentences are not always literally that. Murderers can be paroled but Pete Rose can’t? It is hypocritical of Manfred and MLB to maintain this hardest possible line against the evils of gambling while being in a corporate bed with DraftKings, the daily fantasy site being systemically found to be a portal of illegal gambling, most recently by the New York Supreme Court. I get why Rose was punished, I just don’t get why he isn’t now reinstated when, at this point in his life, it would be a purely ceremonial gesture. I mean, Barry Bonds, who set home run records literally cheating opponents by using performance-enhancing drugs, can be hired as the Marlins hitting coach but Rose remains on the wrong side of baseball's locked gate? Certainly the deterrent effect — Rose an An Example — has served its purpose. He is why modern players know not to have a bookie or place wagers. From this point forward the only practical reason to continue Rose’s banishment is to continue to bar him from the Hall of Fame — a place where he belongs because, unlike the Steroids Era guys, Rose (A) did not cheat opponents and (B) has served his time. Rose is the only living person on baseball’s "permanently excluded" list, meaning he is not eligible to be on the Hall ballot. There may be wiggle room, though. Manfred noted his ruling was separate from the Hall of Fame, which is not owned by or run by MLB. The Hall in 1991 adopted a rule stating no banished players could appear on its ballot — but sometimes rules change, right? Sometimes exceptions are made. Plainly, Cooperstown has the right to put Rose on its Hall ballot if it chose to — and should. Let Hall voters (myself included) decide if the game’s all-time hits leader has been in purgatory long enough. I may be wrong, but I’m guessing enough of us think Rose has done more than sufficient time for his crime, and that the day at Cooperstown he deserves should not come to him posthumously. OK, the preceding is a condensed version of my column. Now it's your turn. Agree with me that Rose should be on the Hall ballot? Or disagree? Take a dip in our poll and say why you feel as you do.

Poll result: It's a big "no!" to Heat trading for 'Melo: We asked how you felt about a trade floated by ESPN's Chad Ford that would send Miami's Justise Winslow and Luol Deng to the Knicks for Carmelo Anthony. The response was huge, and it was 11.9 percent "Yes!," 5.6% "Leaning yes," 12.8% "Leaning no" and 69.7% "No!" Not surprised the no's won, but am surprised by the margin.