1) It is THURSDAY, JULY 2. Pictured right is the new Rolling Stone cover. Would it be wrong to admit I stared at the photo for about five minutes before noticing she was wearing a hat? 2) In The Previous Blogpost (ITPB): Heat/Dwyane Wade impasse, Dolphins training camp schedule, "Let's gooooo States!" & more. 3) Follow us on Twitter @gregcote. Also on Facebook, Instagram, Vine and now Periscope, too.

"Brett Favre says he could still play at age 45? Sounds like the concussions talking." --Greg Cote

This is why we missed Jose: Click on Welcome Back, Kid K for today's latest column by me, from Marlins Park, on the long-awaited comeback of Jose Fernandez. It wasn;t just the high heat and wins that Miami and fans have missed. It was the passion.

HEAT RE-SIGNS WADE FOR 1 YEAR: Heat and Dwyane Wade today agreed to a new 1-year contract for $20 million. Him staying in Miami is not a surprise at all. Click on Heat And Wade Will Work It Out to read my recent column. The market for Wade was soft. He wanted to stay. Heat wanted him back. All those things led to today's news. What is a bit surprising is the 1-year deal, which essentially means all of this starts over one year from now: Will Dwyane leave? How much will Miami pay to keep him? For now, though, the bottom line is all that counts. Wade remains a #HeatLifer. (At least for another season...)

HEAT AND ALDRIDGE? HA HA HA!: Seriously, I mean, we all love Pat Riley and think he's a magician and all that, but does anybody really think that Riles meeting tonight in L.A. with free agent LaMarcus Aldridge means Miami will land the NBA's most coveted actually available free agent? They don't have the money for Aldridge if they plan on re-signing Dwyane Wade and also planning for 2016. Nor do they especially have the need because Chris Bosh plays the same role. I'lladmit how wrong I was if somehow the Heat lands Aldridge. Meantime, anybody who tells you this could happen may well be drunk.

IT'S A WINNING JOSE DAY FOR MARLINS FANS, MIAMI: [See link above for today's newest column by me from Marlins Park]. In a 12:10 matinee today at Marlins Park, Jose

Fernandez toed the mound in a real game for the first time in 419 days, since injuring his elbow and undergoing Timmy John surgery in May 2014. And it was a winning effort in a 5-4 final that drew more than 32,000. This Marlins season has disappointed, from the won-lost record to the managerial change to Giancarlo Stanton's injury. A strong performance by Fernandez today wouldn't make everything better, but it would be a  much-needed symbol that better days are ahead. "I know I have to stay calm," Jose said yesterday. Bet that Marlins fans were a bit anxious, too. The team and its fans have missed and need more than what his right arm brings. The Marlins have missed his excitement and enthusiasm, too, so welcome back, Kid K.

WADE, LEBRON DO THE BAHAMAS: Former teammates and still-good-friends Dwyane Wade and LeBron 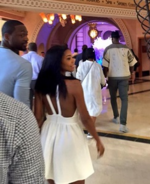 James and their wives were seen at Atlantis in the Bahamas last night, mini-vacationing together. Pictured left: Dwyane and Gabrielle walking through the Atlantis lobby, glancing over their shoulders, and LeBron walking just ahead of them, the inconspicuous 6-8 guy in the hat. Of course this photo and others like it snapped on smart-phones blew up on social media ... just like you know Dwyane and LeBron knew they would. Of course this could be an innocent, long-planned getaway by a couple  of friends with unlimited money. It also could be a well-timed public display designed to foment a rumor that LeBron may be trying to coax Dwyane to sign with Cleveland -- either because he really is, or to create leverage for Wade to squeeze more dollars from Miami to stay. I bet on the latter. Interesting either way, though.

NO SURPRISE: HEAT KEEPS DRAGIC. WADE NEXT?: It is being reported as the 5-year, $90 million
deal that was expected -- and keeping point guard Goran Dragic is Miami's first big move of 2015 free agency. Hassan Whiteside Tweeted congratulations that included, "Let me borrow 5 dollars. lol."  The only other free-agent move that really matters to Heat fans in the coming hours or days will be whether the club will spend enough to re-sign Dwyane Wade, or see him poached by another team. There is no reason, at least not yet, to think Wade will not be back. I asked Yahoo's tapped-in NBA expert Adrian Wojnarowski about Wade/Miami on the radio and he said, "I'd be shocked if this didn't work itself out in the near future." Yesterday ESPN's Chris Broussard said of Wade: "He's a lot of [other] teams' Plan B. That's why most people think he'll wind up back in Miami. If he wants $50M long term, then he's probably going to have to get it from the Heat." Stay tuned.

HEAT SUMMER-LEAGUE INFO: Heat announced its 18-player roster for the upcoming NBA summer leagues in Orlando and Las Vegas, and we were the first Herald blog to bring it to you. Team will play five games in Orlando starting July 4 and at least five

PARTYING LIKE IT'S 1945! "LET'S GOOOOO STATES!": I enjoy absurd hyperbole (everybody needs a hobby),

so I'll go ahead and say the Americans' 2-0 victory over Germany in the Women's World Cup on Tuesday was the best U.S. result in the two countries' relationship since the Germans surrendered in World War II on May 8, 1945. U.S. advances to Sunday's WWC championship match in Canada vs. Japan, which edged England 2-1 in extra time last night. This sets up a rematch of the 2011 final won by Japan and sets a narrative for the thirst for U.S. revenge. I'll try my best to avoid politically incorrect Pearl Harbor references. No promises, though.

ON THE CONFEDERATE FLAG: You can't keep sports out of political issues, and vice versa. Sports are too interwoven into society. Latest example is the national movement to ban the Confederate flag from

flying on government buildings in the wake of the racist mass killing at a South Carolina church. Now NASCAR -- still so linked to the Deep South -- is disassociating itself from the flag and even offering a trade-in: Race fans may exchange their Confederate flag for an American flag. Champion Kentucky basketball coach John Calipari also has come out against the Confederate flag. My take? The Civil War happened in the 1860s. Time to move on. I do not believe all who support the Confederate flag are racists. Yes, I've seen the "Heritage, Not Hate" bumper stickers. But I do understand why that flag, once flown by the side that supported maintaining slavery, might be seen as a symbol of racism by many. I'm curious on your thoughts. Take a dip in our poll and say why.