DOLFANS CALLED WORST IN NFL: Hey don't blame the messenger. I'm just passing this along. A new study by Atlanta's Emory University rates NFL teams 1 through 32 in "fan equity rankings," and Miami is ranked 32nd. Emory calls it "a measure of brand equity that is based on fans' willingness to financially support their team ... based on the average Fan Equity score for the last three years." Dallas is ranked No. 1. Click here for the story including full rankings and methodology.

Stoudemire, just one day after signing guard Gerald Green, 29, a 6-8 "young veteran," to a one-year deal at the minimum $1.3 million -- another bargain for Miami. Green averaged 11.9 points for Phoenix last season including 35 percent from 3-point land. He'll likely back up Dwyane Wade (who officially re-signed, as expected) at shooting guard and offer the needed threat from 3ville. Adding Green also suggests the club may be looking at rookie swingman and No. 1 draft pick Justise Winslow more as a small forward than a guard, at least initially. In Stoudemire, 32, the Heat get a man five years or so past his best days, but a man who, if his knees stay sound, still has offensive punch and can be a valuable backup big man in the rotation, a 6-10 power forward/center.

JASON PIERRE-PAUL WAS WRONGED. WHO'S TO BLAME: A Giants defensive end from Deerfield Beach is celebrating the Fourth of July in Miami, does something dangerous and careless with fireworks and ends

up hospitalized at Jackson Memorial Hospital. Thursday it is reported by ESPN's Adam Schefter that Pierre-Paul has had his right index finger amputated. Schefter knows this because someone at Jackson (apparently) leaked the player's private medical records, which would violate laws, and Schefter posted those private records on Twitter, which, to me, skirts the line of journalistic ethics. Jackson is investigating on its end. Nothing yet from ESPN yet on Schefter's actions. I'm curious what you think. Is it no big deal because the info on the amputation would have come out eventually? Was Schefter just doing his job? For me the bottom line is, the law is the law and even a prominent NFL player has a right to medical privacy. Your turn. Take a dip in our poll and say why you feel as you do.

GOLF AND POLITICS: THE DONALD TRUMP MESS: I did it. I touched the lightning rod that is Donald Trump. As well as the lightning rod you often get when sports and politics mix. I did it with my latest column -- click on Golf Should Say No to Trump to read in full -- and the email reaction has been 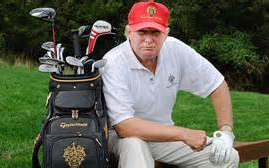 voluminous and largely vitriolic. A representative email from Vince F of Miami (last name withheld): "Hey ass-wipe, Trump is a Billionaire, you are still paying off mortgages." Then it got nasty. Vince, I was not aware great wealth made someone right and that relying on a paycheck made someone wrong. At least you're not materialistic or anything! (Quick aside: My mortgage happens to be paid off and I just paid cash for a brand new car. Does that make me a better person to you? More right?) I believe and wrote that the PGA Tour and other golf entities should disassociate themselves from Trump-owned golf courses because of his recent prejudicial, broad-swipe comments ("They're rapists...") about Mexican immigrants. NBC, Macy's, Univision and others already have done so. Unfortunately that would include the annual WGC/Doral tournament. Many emailers are on a tangent about immigration, as if what I wrote was about that topic. It wasn't, but as it happens I'm for strong borders. On very few topics am I more conservative. Anyway, the strong reaction to my column leads me to take a pulse here, too, with a blog poll. This poll is not about Trump's presidential bid. This is not about immigration. This is, specifically, about whether golf should continue to partner with a man who said what he did about Mexicans, and without regret. Take a dip in our poll and say why you feel as you do.

JOSE STAYS MASTERFUL AT HOME: Jose Fernandez this week vs. the Reds made his second start since returning from Tommy John surgery, and his second strong, winning one. The Marlins had been losers of four straight and desperately needed him to continue his at-home perfection, and he delivered. Jose is now 14-0 with a 1.17 ERA pitching in Miami in his young MLB career. Astounding. Meanwhile:

Marlins record this year under his replacement Dan Jennings: 20-28, .417

Poll result: ESPN 'Body' issue is about narcissism: We asked your view of ESPN's annual 'Body' display of athletes nude but somewhat covered, and it was 49.0 percent negative (narcissism) vs. 35.5% positive (artfully done). The other 15.5% were undecided.

LUOL DENG'S SPECIAL VIDEO: The Heat forward thinks bigger than basketball. He was born in Sudan (now South Sudan) and cares deeply for his heritage. Four years after its independence, South Sudan suffers through violence, hunger and a collapsing economy. Luol's video is worth a minute of your time:

"DEAR GREG...": "...Your blog's good but would be even better if occasionally you would show a picture of a crow hitching a ride on the back of an eagle. Would that be possible? Thank you." Dear Reader: No promises, but let me get right on that.