Poll results: Shula beats Riley, Marino edges Wade: In the ultimate Miami Greatness heavyweight bouts, we asked who has had the greater career in South Florida, and the two Dolphins stalwarts withstood the two Heat challengers. Dan Marino edged Dwyane Wade for greatest Miami athlete by 52.7 percent to 47.3%, while Don Shula beat Pat Riley more easily for best coach/executive, 59.9% to 40.1%. Wade and Riley led early in voting but could not sustain that momentum.

WHO'S NEXT: STANTON OR TANNEHILL: In my latest column I propose that Marlins slugger Giancarlo Stanton and Dolphins quarterback Ryan Tannehill stand out among current Miami pro athletes

with the best chance to someday reach the Dan Marino/Dwyane Wade echelon of all-time great and beloved South Florida sports stars. No that they will; that they have a shot. Click on Race For The Mountaintop to read the full column. Stanton can do it with sheer home-run power and awesome individual skills. Tannehill's path is to end a four-decades-plus drought and deliver to Dolfans another Super Bowl championship. Am curious which of these two rising stars you think -- 10 years from now -- has a better chance to be judged in that Marino/Wade company. You'll note the poll includes no option for "Neither" or "Somebody else," because we're simply wondering which of these two leading candidates has the better chance. Take a dip in our poll and say why.

Advice for Marlins, Dolphins: Click on Right Time To Be Smart Sellers for this week's earlier column on the Marlins at the trade deadline, and on Get The Missing Piece for our call for the Dolphins to sign free agent guard Evan Mathis.

ON AL GOLDEN's 'KUMBAYA MANIFESTO': Miami Hurricanes football, around the corner now, is coming off a 6-7 season, lost seven top players to the NFL Draft and is forecast for another six-win-type season 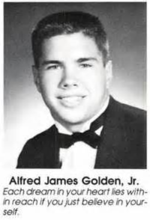 based on Vegas over/unders. Reasons for encouragement? Quarterback Brad Kaaya, for one. Also, a
wide-open (read: winnable) ACC Coastal Division, and an experienced defense despite the attrition. I think UM could be a pleasant surprise. Coach Al Golden's preseason mantra interests me, though. He's all about the intangibles, embodied by his saying, "We have one heartbeat now." I coin the phrase "Kumbaya Manifesto" because Golden boasts of a "very team-oriented group," mentions "a lot of trust" and "a bond." Stresses stuff like "focus" and "accountability." (Many may know that Kumbaya is an old spiritual song that has come to stand, somewhat cynically, for a naively optimistic view of a situation or of human nature). Golden, pictured at 17, showed a predilection for touchy/feely in his high-school yearbook quote: "Each dream in your heart lies within reach if you just believe in yourself." There have been implications that last year's 6-7 Canes disappointment was due at least partly to a team not believing in itself, a team suffering from selfishness and a lack of leadership -- and Golden has sought to make clear that such cancers have been eradicated. We'll see how important that is. A tight lockerroom and a team singing Kumbaya in harmony is good. Adequately replacing Duke Johnson, Phillip Dorsett and Denzel Perryman is even better.

FALL FROM GRACE POLL: COSBY OR O.J?: We were debating this on the radio show Tuesday, with fair argument on either side. Has celebrated football star O.J. Simpson or beloved actor Bill Cosby had the bigger, more notorious fall from grace? Take a dip in our poll and say why.

U.S. MEN EMBARRASS AMERICA: Just a couple of weeks after Americans celebrated the U.S. triumph in the
Women's World Cup, the U.S. men's team shamed itself and American soccer fans Wednesday night in a 2-1 Gold Cup semifinal loss to underdog Jamaica. The squad of coach Jurgen Klinsmann, pictured, had the home field advantage (game was in Atlanta), a near flawless history vs. the "Reggae Boyz" and allegedly the better team -- all for naught. U.S. men had slipped to No. 34 in the FIFA World Ranking even before last night. The notion they might duplicate the women's international success anytime soon seems ludicrous today, alas. (Mexico beat Panama in the other Gold Cup semi, thanks to an outrageous Call of God penalty-kick gift).

WEIGHING THE FISH (90 GAMES): We throw an occasional bell 'n whistle into the blog, and this

year we debuted a new Miami Marlins feature. "Weighing The Fish" -- WTF! -- is a once-every-10-games (or so) cumulative ranking of every Marlins batter who is averaging at least one at-bat per game. Ten qualify for our latest ranking. WTF factors six offensive categories, serving as an ongoing de facto team MVP race -- a race drawn somewhat closer by the Stanton and Gordon injuries. The numbers below might not mean much, but, relative to each other, it gives an idea who is having the best overall season or is hot/cold. Here's the WTF after 90 games (actually 95 at 40-55; oops yet again):