1) It is SATURDAY, JUNE 27. Random Evidence, the Sunday notes column off on vacation the past two weeks, returns this Sunday. 2) In The Previous Blogpost (ITPB): Cote Does Paris (a travelogue), Hot Button Top 10, Heat draft projection, latest Weighing The Fish, Dolphins still King & more. 3) Follow us on Twitter @gregcote. Also on Facebook, Instagram, Vine -- and now Periscope, too.

that Marlins star Giancarlo Stanton -- the sport's home run and RBI leader -- has a broken bone in his hand. ESPN's Tim Kurkjian further reported it is the hamate bone in Stanton's left hand and that he will have surgery and be sidelined four to six weeks. The Marlins later today called it a wrist injury in placing Stanton on the 15-day disabled list. (The hamate is located at the joint of the wrist and hand). Stanton had complained of soreness after last night's home loss to the Dodgers. Reeling Miami has now lost five games in a row, the Stanton injury compounding the disappointing season. He'd been about the main reason to still watch. Stanton will obviously miss the upcoming All-Star Game and Home Run Derby. I'd first speculated he'd likely be out a couple of months; fortunately he could be back a bit sooner, and going on the 15-day DL (not longer) may be a positive sign. I remember Joe Robbie once lamenting how the Dolphins were "wasting the Marino years." Well, the Marlins were wasting Stanton's this year. He'd been great. His 27 homers lead the majors. His season pace was around 59, pre-injury. But it hasn't been enough. Stanton was headed toward being the first big-leaguer since 2002 to top 50 homers for a losing team. Now, the injury makes his reaching 40 seem the likelier target. Tough injury track record for Stanton, and more bad luck for the snakebit Fish.

HEAT DRAFT WINSLOW 10TH OVERALL!: Click on Contingency Plan for my column on this week's Heat draft. With both players taken, Miami is preparing itself for the possibility the Dwyane Wade era may be ending, or at least planning for that eventuality. Original post: The Miami Heat on Thursday night drafted Duke small-forward Justise Winslow (pictured right) with its first-round NBA Draft pick, 10th overall. Winslow is a 6-6, 222-pounder who could fit

Agent who wants to see the  money, did not Tweet congratulations to Winslow when he was drafted by Miami. Chris Bosh did. But Wade didn't. Doesn't prove anything. Interesting, though. Pat Riley said there is "no doubt" he wants to re-sign Wade, but doing so may be tough. Asked if he is concerned Wade may leave, Riley began, "I'm not a pessimist" -- which does not exactly shout confidence. It all begins to play out July 1, when Wade (presumably) will opt out and negotiations may begin. Anyway, back to the draft. I liked Miami's stake. Heat got two very talented players, and love Winslow's versatility. Your thoughts on Miami selecting Winslow No. 1 go here. Vote now and say why.

HOW MUCH DO HEAT FANS WANT WADE BACK?: The title here of the link to my earlier Miami Herald column, on the Heat/Dwyane Wade contract disagreement, cuts to the chase of my opinion: Pay Him. I think Wade, at 33, still is worth 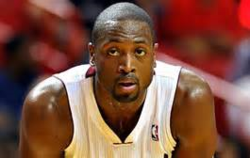 closer to what he's reportedly asking than to what the club reportedly wants to offer. His Heat future is Greater Miami's hottest sports topic with his looming decision whether to opt-out and seek free agency. As teammate-for-now Hassan Whiteside Tweeted this morning: "Man if another person ask me if d wade staying in Miami I'm going to lose it! I DONT KNOW!!! I just catch LOBS from the man." I hope there is compromise when the sides meet in the coming days and that Wade stays. I hope it because of all Wade and has done for the Heat and meant to South Florida. I also hope it because I think Wade, though past his prime, yes, remains a valuable asset moving forward. However, I have been surprised by the mixed reaction to my column. Many staunchly agree with my pro-Wade assessment but many other emailers are conveying they see him as fading and injury prone and think this is the right time for the club to move on without him. That mixed reaction spawns this poll. Weigh in and say why you feel as you do.

the NBA Draft, the NHL Draft is cloaked in mystery because very few of us had heard of any of the guys drafted let alone seen them play. So I won't be presumptuous enough to guess whether the picks is good or not. But I like the idea of it, its aim. Florida needs a big-time goal scorer, and Crouse is a 6-4, 215- pounder that GM Dale Tallon described as a "power forward." Now we wait to see if he's that 30-goal scorer the Cats crave. Meantime, it was a big week for the franchise, which lasted hosted the draft in 2001. Give some weight, too, to Panthers defenseman Aaron Ekblad winning NHL rookie of the year honors this week. It is only the ninth time in 120 combined seasons that a player has been ROY for one of our Big Four pro teams. The Marlins have had four: Dontrelle Willis in 2003, Hanley Ramirez in 2006, Chris Coghlan in 2009 and Jose Fernandez in 2013. The Dolphins have had three (per The Associated Press): A.J. Duhe in 1977, Troy Stradford in 1987 and Tim Bowens in 1994. Ekblad is the Panthers' second, after Jonathan Huberdeau in 2012-13. The Heat, surprisingly, have never had a rookie of the year.