Miami second-naughtiest city: C'mon, Miami, we can do better than No. 2, can't we? A survey by a dating site called OnMutualTerms.com polled 3,528 men and women on the best American cities for "casual encounters" and the top five were Philadelphia, Miami, Seattle, New Orleans and Las Vegas. One question. Philadelphia!? 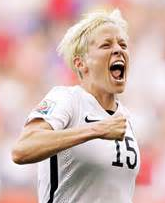 Letterman used to toss watermelons off tall buildings, when it comes to stuff like the Olympics and World Cups. I root for the United States, openly, unabashedly and
with gusto. I become a homer. So I am excited the U.S. women's national soccer team debuting vs. Australia tonight in Winnipeg in the Women's World Cup being held in Canada. I'm excited for patriotic, dare say jingoistic reasons, and also because the women of Abby Wambach, Morgan and bad-girl Hope Solo represent the best America has to offer in female sports. Only Serena Williams, in tennis, is at that level where unrelenting excellence is expected. Much about women's sports doesn't seem to interest America much (women's golf and the WNBA come to mind), but top-level soccer does because it appeals to the frontrunner in us. These women are good. Men's soccer wants to be what the women are: Top-tier contenders on the world stage. This is the seventh WWC, and the U.S. never has finished worse than third place, including championships in 1991 and '99 and a heart-breaking runnerup finish four years ago. But Brandi Chastain & The Sports Bra were a long time ago now. We're due. (Yes, I said we). Most experts rate the U.S. and Germany. So I say it again: "Let's go-ooooooo States!"

MARLINS PICK A SURPRISE IN MLB DRAFT: It pales in national media attention and general interest compared to the NFL and even NBA

drafts, but baseball's annual draft began last night, and the Marlins surprised most experts -- yes, there are baseball mock drafts -- by selecting Canadian prep first baseman Josh Naylor (pictured) in the first round, 12th overall. They list Naylor as 6-1 and 225 pounds. Hmm. This pic must have been taken after a particularly large meal as Naylor displays something of a Babe Ruth physique. As long as the Babe bat comes with it, we're OK. First South Florida player drafted was Miami Hurricanes lefty pitcher Andy Suarez in the second round, 61st overall, by the Nationals. UM and Jim Morris are both preparing for the start of the College World Series and also keeping an eye on the draft, especially where slugging third baseman David Thompson is selected today. He'll likely turn pro if drafted high enough to suit him, but otherwise may return for another season at UM.

HOT BUTTON: TOP 10 THINGS SOUTH FLORIDA SPORTS FANS ARE TALKING ABOUT: Our blog-exclusive Sunday (then updated) feature is part week-in-review, part look-ahead. Hot Button means what's on our minds, locally and nationally, from a Miami perspective, as the sports week just past pivots to the week ahead:

1. NBA: Battered, not beaten, Cavs win Game 3 behind LeBron, again: Already  missing Kevin Love, Cleveland couldn't beat Golden State in Game 1 despite 44 points from LeBron James. Now they'd be missing Kyrie Irving the rest of the series, too. Facing a crucial Game 2 back out west, James said, accurately: "People are writing us off." (Added a grinning, high-fiving Miami: "I know we are!') Well, get me rewrite. LeBron scores 39, has a triple-double and Cleveland ties series, then scores 40 in Game 3 last night to put Cavs up 2-1 in Cleveland.

2. HORSE RACING: American Pharoah runs into history books: Since Affirmed in 1978, 13 horses had won the Kentucky Derby and Preakness then failed to win the Belmont and finish the Triple Crown -- before American Pharoah finally ended that drought in triumph Saturday. (Quick aside: The word is actually spelled “pharaoh,” of course. Somebody buy that horse’s parents a dictionary!)

3. HURRICANES: Omaha! UM baseball back in College World Series: UM swept Virginia Commonwealth in the NCAA Super Regional here to qualify for the CWS for the first time since 2008, in search of Miami's fifth national title and first since '01. Only in college baseball do you hear anybody talk about being in Omaha, Nebraska as a life’s goal and highlight.

4. MARLINS: Fish show signs of life, take another series: Fish got spanbked last night in Toronto but before that in Colorado the Marlins won their third series in a row and fourth in the past five. Meanwhile Giancarlo Stanton is on a home-run tear (18) and Jose Fernandez is due back soon. I'd say things are looking up for replacement-manager Dan Jennings, but, with the Marlins, that’s usually a precursor to something exploding.

6. HOCKEY: Tampa Bay surges to lead in Stanley Cup Finals: While Panthers fans try to recall what the playoffs are, Tampa Bay beat the Chicago Blackhawks 2-1 last night for a 2-1 series lead in the NHL finals. Meanwhile desperate Canada, which invented hockey but last celebrated a championship in 1993, has dispatched a covert team of special-ops Mounties to kidnap the Stanley Cup.

7. TENNIS: Williams wins French, but Djokovic upset loser: Heavily favored Serena Williams won the Franch Open women's title on Saturday, but No. 1-ranked and top-seeded Novak Djokovic was upset on Sunday by Stan Wawrinka for the men's title. Stan Wawrinka!? So much for me making fun of tennis' predictability by suggesting they saved time by engraving both trophies before tournament even started.

8. CAITLYN JENNER: Bruce's transformation sparks fascination: Former Olympic decathlon champion Bruce Jenner, a transgender, became Caitlyn Jenner, debuted herself on the cover of Vogue and set a record for becoming the quickest person ever to reach 1 million Twitter followers. And me, still stuck at 18,000 and change. Hmm. Something to think about...

9. DOLPHINS: For Fins, it was a bad week for feet: Haven't even reached preseason mini-camp yet, but last week top draft pick DeVante Parker underwent foot surgery (he should be ready for the season), and kicker Caleb Sturgis injured his foot while playing, of all things, kickball. A kicker being injured playing kickball is a little like the fire chief burning his hand on the stove.

10. HEAT: Wade attends graduation, gets TV gig: Never dull around Dwyane Wade. Last week he was invited and attended Western High's graduation ceremony, and then was part of ABC's Finals coverage on Sunday night. Meantime it remains up in air if Heat will pay Wade what he wants or see him test free agency. Maybe on TV Sunday Dwyane should have appeared disheveled in shockingly unfashionable, tattered clothes and held up a hand-drawn cardboard sign reading, 'Will Stay In Miami For Millions.'

Poll result: Animus toward LeBron still percolating: No, Heat fans have not forgiven LeBron James the way he left Miami. We asked (you may still vote) and 63.3 percent are rooting against LeBron in the NBA Finals versus only 12.7% rooting for him. The other votes were split among 10.3% who are "sort of conflicted," 10.2% "not interested or watching" and 3.5% "pretending to not be interested."