Hurricanes are headed back to the College World Series in Omaha for the first time since 2008, in search of the school's fifth national championship and first since '01. UM won the opener on Friday, 3-2. Click on The Promised Land for my column from the first game. Morris called Omaha "the promised land." Today, they got there.

LEBRON MASTERFUL BUT GOLDEN STATE, HEAT FANS TAKE GAME 1: It had to be weird for the sizable LeBron

Haters wing of Heat fandom to watch last night, reveling in Golden State's 108-100 OT win over Cleveland in Game 1 of the NBA Finals but also grudgingly reminded of LeBron's beyond-greatness as he scored 44 points in defeat. The Warriors strategy seems clear: LeBron cannot beat us alone and, unfortunately for him, has nobody else. He took 38 shots, but only four in the paint. Now, with Kyrie Irving apparently injured (again), the idea of LeBron as a one-man Army is underlined.Last night was so the game Cleveland had to steal. Now, Golden State's favorite's role seems greater than ever. Most Miami fans will smile at that. But they also should be marveling with appreciation at LeBron's greatness -- and longing for what they lost even if they won't admit it.

"U-S-A! U-S-A!" WOMEN'S WORLD CUP NEAR: I toss my journalistic neutrality theatrically out the window, like Dave Letterman used to toss watermelons off tall buildings, when it comes to stuff like the 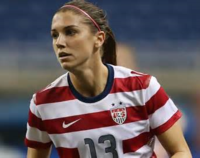 Olympics and World Cups. I root for the United States, openly, unabashedly and with gusto. I become a homer. So I am excited the U.S. women's national soccer team debuts vs. Australia on Monday in the Women's World Cup being held in Canada, starting tomorrow/Saturday. I'm excited for the patriotic reasons mentioned, and also because the women of Abby Wambach, Alex Morgan (pictured) and Hope Solo represent the best America has to offer in female sports. Only Serena Williams, in tennis, is at that level where unrelenting excellence is expected. Much about women's sports doesn't interest America much (women's golf, the WNBA), but top-level soccer does because it appeals to the frontrunner in us. These women are good. Men's soccer wants to be what the women are: Top contenders on the world stage. This is the seventh WWC, and the U.S. never has finished worse than third, including championships in 1991 and '99 and a heart-breaking runnerup finish four years ago. We're due. (Yes, I said we). Most experts rate the U.S. and Germany. So I say it again: "Let's go-ooooooo States!" 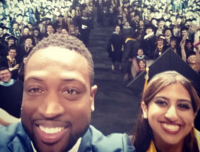 WADE'S MASTERY OF PUBLIC RELATIONS: I'm not couching this negatively. What Dwyane Wade just did was a very neat thing. A student at Broward's Western High named Negeen Fallahzedeh had started a #WadetoWestern hashtag campaign on Twitter last summer to get the Heat star to drop in on her class' graduation ceremony. And he did! The selfie at right proves it. Dwyane has done this sort of thing before. I think his desire to make small dreams come true is genuine. But this also is a public-relations masterstroke that serves another purpose. It reminds us -- coming in the early stages of what could be a messy contract renegotiation -- how integral Wade is with this community, and how popular he is. To the point, it reminds the Heat, who must decide how much he is still worth.

Poll result: Zonk in a landslide for Dolphins' "next best" player: We conceded Dan Marino as greatest Dolphins player of all time and asked in the previous blogpost who was No. 2 (you may still vote), and among seven choices Larry Csonka dominated with 50.3 percent of the vote. Then came Jason Taylor with 19.7% and Bob Griese with 15.9%.