1) It is SATURDAY, MAY 9. 1) Floyd Mayweather (pictured) models the new T-shirt his company has put out. Isn't modesty supposed to be a virtue? Furthermore, there are zero boxing historians not on his payroll who'd agree with the message. 2) In The Previous Blogpost (ITPB): Deflategate report implicates Patriots, D-Wade at the Met Gala, sombrero poll, heat on LeBron, local firm sues Pacquiao, new Super Bowl/MLB odds, appreciating Dee Gordon & more. 3) Follow us on Twitter @gregcote. Also on Facebook, Instagram and Vine.

Dolphins lose, win: The loss? Offensive lineman La'el Collins, whom Miami wooed heavily, signing instead with Cowboys. The win? Having all seven draft choices signed already. Although that's not nearly as big a deal or impressive as it once would have been. Once NFL rookie salary cap kicked in, holdouts became extremely rare.

WOULD YOU HAVE CHEERED OR BOOED A-ROD'S HISTORIC HOME RUN?: [Click on This Is The Cost for my latest column, on how one of the casualties of the Steroids Era is that what should be great baseball moments -- like A-Rod's milestone home run -- become awkward embarrassments for the game]. Original post: Miami-raised Alex Rodriguez's 661st career home run passed legendary Willie Mays for fourth on the all-time

list Thursday night, but of course the accomplishment is tainted. He sat out the entire 2014 season for steroids use, not his first admission of PEDs. It is not a stretch to think the number 661 is artificially juiced. The Yankee Stadium crowd gave A-Rod a curtain call but even he admitted afterward, "I certainly thought the days of curtain calls for me were long gone. I was a little embarrassed and it was a little awkward." I wonder what the reaction on the road would have been -- or should have been. Say it happened at Marlins Park. Do you appreciatively and respectfully cheer a major historic accomplishment? Is forgiveness in play? Or do you boo a man who clearly cheated to get that record? You would have done what? Vote and say why.

DOLFANS EXPECTING MAJOR BRADY SUSPENSION MAY BE DISAPPOINTED: Click on Is 'Probable' Guilt Enough? for my column on the Wells Report's Deflategate conclusion and what it might mean in terms of NFL punishment of the Patriots and QB Tom Brady. It bears further discussion and amplification 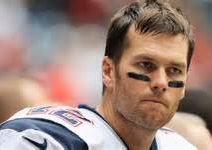 here because I suspect Dolphins fans are expecting -- wrongly, I think -- that the league will bring the hammer down on the Patriots and especially Brady. I won't pander to Dolfans and say otherwise; plenty of others to do the pandering. Three factors by my vantage weigh against a major suspension: 1) Weak, equivocal findings. The report concluded it was "more probable than not" that Brady was at least "generally aware" of the improper activities. "More probable than not" isn't exactly definitive. Will the NFL bring the hammer down on its league champion and star QB based on "maybe"/"likely"? 2) Brady's clean record other than Deflategate. Note that Brady was not implicated or disciplined in the 2007 "Spygate" matter that aimed the hammer at coach Bill Belichick. 3) Did the rule-breaking affect results? No indication it did, certainly not in an AFC Championship Game the Colts lost, 45-7. So, what next? Certainly there will be punishment. The current climate under commissioner Roger Goodell all but assures it. No way the NFL spends time and money on a 109-day independent investigation and then doesn't act on it. Owner Robert Kraft and Belichick are not implicated and very likely won't be disciplined. However the club likely will be fined substantially and be made to forfeit a draft pick that I doubt is a first-rounder but could be. The big question is Brady's punishment. I wrote that I wouldn't suspend him at all based on "probable," but the likelihood may be a small suspension -- based as much on his lack of full cooperation in the Wells investigation as on its findings. I just don't buy the overreaction I am hearing, including Colin Cowherd predicting a "severe" punishment. And the speculation about a possible full-season suspension? Ludicrous. For what it's worth the odds on Brady's punishment via footballbettingcenter.com are: 1 game--2/1 odds; not suspended at all--5/2; 2 games--5/2; 3 games--8/1; and 4-plus games--15/1. If I'm right, and if those odds are, Dolfans and many in the media calling for a major suspension may be disappointed. I'm curious what you think would be fair discipline of Brady. It may be futile, but I challenge Dolfans here to not vote for the discipline they'd prefer for a nemesis/rival, but rather to dispassionately consider the discipline they'd think fair if roles were reversed and, say, the Dolphins and Ryan Tannehill were the accused here. Take a dip in our poll and say why.

Poll result: You may wear a sombrero guilt-free: We asked if it was OK to wear a sombrero on Cinco de Mayo just for fun, and 82.2 percent said yes. Another 8.3% said no because it's insulting to Mexicans, and 9.5% were undecided.