1) It is THURSDAY, MAY 14. Happy birthday to my youngest son. Love you, Michael! 2) Miami royalty: Dwayne "The Rock" Johnson meets up with Marlins' Giancarlo Stanton (pictured) the other night in L.A. after Stanton put one clean out of Dodger Stadium. 3) Patriots issue lengthy rebuttal to Wells Report. Click here for story and link to Pats' response. 4) In The Previous Blogpost (ITPB): Brady punishment with poll, Marlins bench closer, rooting for LeBron, updated Super Bowl odds & more. 5) Follow us on Twitter @gregcote. Also on Facebook, Instagram and Vine.

Dee Train: A new blog feature: Starting today, "Dee Train" will be a daily blog update on the Marlins' Dee Gordon as he bids to become baseball's first .400 hitter since Ted Williams in 1941. We'll do it as long as his average remains at .385 or higher. (Yes, people who believe in jinxes and superstitions will hate this). Gordon updated season: .426 (58-for-136) after 4-for-5 last night. Next: Friday vs. ATL.

'Miamians For LeBron' bandwagon forming; good seats still available: In today's latest column, on how these NBA playoffs are refreshing and good for the league, I explore further the fractured relationship between Miami and LeBron James. I propose -- tongue in cheek, I'd remind those less discerning -- that continuing animus is unfounded. Click on Miamians For LeBron to read column in full.

AS AN EVOLVING NEWSPAPER INDUSTRY REDEFINES ITSELF: I offer below the 9-minute video "We Are McClatchy," released earlier today. McClatchy is the parent company of the Miami Herald among many other media entities, and the video describes ways in which the beleaguered newspaper industry is continuing to refashion itself in the digital age. I recommend the video to anyone who cares about the Miami Herald, past, present and future, and to anyone who cares about the American newspaper industry and where it is headed.

IS WIZARDS' JOHN WALL THROWING UP GANG SIGNS?: As a spokesman for the Old White Community I can tell you I don't know gang signs from Adam. Somebody says the word "gang" to me and I start 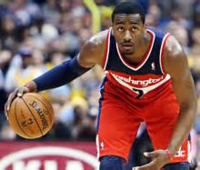 humming Spanky And Our Gang's "Sunday Will Never Be the Same" from 1967. But I can tell you a lot of people much closer to street level than me are convinced Washington point guard John Wall (pictured) was throwing up a gang signs for the Bloods during last night's playoff game, augmented by shouting the phrase "Big B's." Google Wall's name and "gang sign" to see the stories, video and Twitter references. (Wall had been involved in a similar gang-sign controversy while at Kentucky). Should we care? I'd imagine the Wizards and the NBA office do. Here we are in the midst of a great playoffs, with all four conference semifinal series at 3-2 and multiple Game 7s maybe looming, and we're talking about a star player and possible gang affiliation. It'll be interesting to see what comes of this, whether it be an explanation from Wall, admonishment or discipline. I'd be surprised if something didn't. 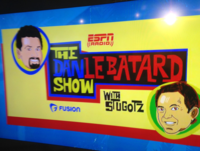 LEBATARD RADIO SHOW READY FOR TV DEBUT: You've lent him your ears. Now he'd like your eyes, too. ESPN Radio's Dan LeBatard Show with Stugotz is preparing to make its television debut on the Fusion network this coming Tuesday May 19. The show began preparing/rehearsing for televised radio by broadcasting from its new studio at the Clevelander on South Beach earlier this week on

Tuesday, with Le Batard assuring listeners the content of the show would not change and making the distinction that it would be a radio show on television, not a TV show on radio. The logo for the new show is pictured. From Wade Beckett, Fusion’s chief programming officer: "Dan's smart-yet-irreverent take on sports and the stories making headlines perfectly aligns with Fusion’s desire to present this young, diverse generation with an array of dynamic voices that have an authentic point of view and, at the end of the day, are just are fun to watch." Says LeBatard: "We are pumped about unleashing the primitive Stugotz on a new and unsuspecting audience. And maybe we will talk some sports, too. Our goal is to not totally break Fusion. But the show will be better on the days we do." I'll continue to be a once-a-week guest on the show, unless Fusion convinces Dan to fire me. I'll be in the Tuesday slot although my on-TV debut will  be Thursday May 21.

Poll result: Most think Brady punishment impact on Dolphins won't be major: We asked about the impact of Tom Brady's 4-game suspension on the Dolphins and it was a photo finish between "moderate" (46.1 percent) and "minor" (45.7%). Only 8.2% voted "major."

"DEAR GREG...": "I heard a TV report that in Alaska, and now spreading elsewhere across America, bears have begun assimilating and are now interacting with humans in ways never before thought possible. Can you explain, please?" Dear Reader: Sorry, but I have no idea what you're talking about.