1) It is MONDAY, APRIL 6. Hope y'all had a Happy Easter in celebrartion of the original comeback king, Jesus. 2) Click on Random Evidence for our latest Sunday notes-column package, leading with Marlins. 3) In The Previous Blogpost (ITPB): Hut Button Top 10, Duke-Wisconsin poll, Heat/Panthers playoff update & more. 4) Follow us on Twitter @gregcote. Also on Facebook, Instagram and Vine.

Marlins and Jeffrey Loria: I visited with the controversial team owner for my column in Sunday's season-preview section. Many still dislike Loria, but will a big-spending offseason help his image? Click on Judging Jeffrey to read.

PLAYOFF CHASE: Reeling Heat lose yet again. Outlook entering Monday: A daily blog feature as one team fights to finish in top eight in Eastern Conference. HEAT--Trending down in 10th place at 34-43 (L4) after last night's 112-89 loss at Indiana, 1 game from 8th, 0 games (tiebreaker) from 9th with 5 games left (next Tuesday vs. Charlotte). Heat playoff likelihood: 49.2% (down 11.3) per Hollinger/ESPN. PANTHERS--Eliminated. 2 games left (next Thursday vs. Boston).

Check us out on Twitter, Instagram and Vine for new pix and vids from today's Marlins Opening Day.

OPENING DAY! MARLINS UNFURL 2015 SEASON: Update: Marlins lose opener 2-1 to Braves this evening. More calamity. Field rained on when retractable roof doesn't close in time, and soggy field partly blamed for loss. Watch for my column from Marlins Park posting online very soon. Original post: There are a few things the National Pastime still does better than the almighty NFL. The all-star game is one. Another is Opening Day. The start of football never seems special the way to opening of baseball does. So the red, white and blue bunting 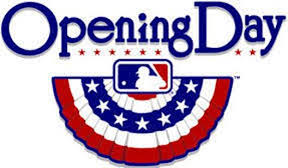 will be out at Marlins Park late this afternoon as the new-look, high-hope Marlins host the Braves. Miami has made the playoffs only two of 22 previous franchise seasons (albeit winning the World Sereis both times), yet optimism helps welcome this season. Countering that: Baseball remains the toughest playoff ticket in American sports, even with the addition of the wild-card games. Can the Marlins hang close enough to contention until Jose Fernandez's summer return from surgery? While we wait to see, at-bats by Giancarlo Stanton (pictured) will continue to be some of the best minute or two in all of sports. I'll be at the park today, on one of those days I like my job. Meantime, take in a dip in our poll and help set expectations for this Marlins season. Remember, not asking what you hope will happen, but what you honestly expect will. Vote and say why.

ILL-TIMED HEAT SWOON: Four straight losses now and seven of the past nine after last night's embarrassed showing at Indiana have the Heat now struggling to make the postseason (see Playoff Chase above). Miami may need a 4-1 finish to do it and has four home games left to feather the cause. That would be a a win Tuesday vs. playoff-chase rival Charlotte, a split of the following games vs. playoff-qualified Chicago and Toronto, then a regular-season-ending sweep of East bottom feeders Orlando and (at) Philadelphia. Little margin of error now. Want the playoffs, Heat? Act like it.

DUKE, WISCONSIN: GREAT CONTRASTS. COIN, PLEASE?: The unexpected elimination of toppled unbeaten Kentucky has left tonight's NCAA Tournament men's championship game without a clear or even agreed-upon favorite. Some etting odds have Wisconsin favored by one point, most have it dead-even. Duke seeks its fifth national title, following 1991, '92, 2001 and '10. Wisconsin's only previous national championship was in early-days 1941. Tonight's event misses the cheering for, or against, Kentucky to go 40-0, but it leaves us an intriguing contrast of a matchup. Duke's searing defense vs. Wisconsin's big-scoring O. Young Blue Devils led by freshman Jahlil Okafor vs. veteran Badgers led by senior Frank Kaminsky. Buttoned-down Duke vs. free-spirited Wisconsin. Badgers may have the greater incentive, aiming for a first modern-era title and losing to Duke at home in December and also in last year's NCAA semifinals. But give me Mike Krzyzewski and his terrific defense tonight.

Playoff result: Duke by narrowest of margins: We asked, and you voted 50.7 percent for a Duke championship and 49.3% for Wisconsin.

"DEAR GREG...": "Your blog's OK but would be even better if occasionally you would show a picture of what the world might look like if animals were of supreme intelligence, walked upright, and dressed even better than we humans do. Thank you." Dear Reader: What an oddball request!