It's Radio Tuesday!: I'm back in-studio with the Dan LeBatard Show today, 3-7 p.m. on The Ticket Miami, 4-7 ESPN Radio. Ears welcome. (And eyes, on the national-show webcast...)

Stuck in the middle with you: Those six words are more than a 1972 song by Stealers Wheel. They describe the position of So-Fla sports fans, as I explore in today's latest column. Click on Border Town to read. Heat and Panthers clawing just to make playoffs, UM men's basketball on NCAA Tournament bubble, Dolphins and UM football stuck in mediocrity, Marlins improved yet not a betting pick for playoffs ... everywhere you look, our teams are better than bad but maybe not quite good enough.

Corner to Fins in first round?: For what it's worth, USA Today's new, post-Scouting Combine mock draft has Miami selecting Michigan State cornerback Trae Waynes. My comment: That's be a great, but it's doubtful the draft's top CB will still be around at No. 14. 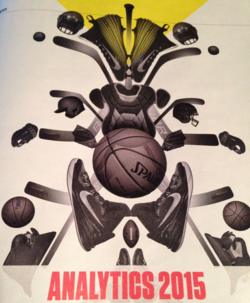 it "The Great Analytics Ranking" and it is now on The World Leader's website; click here. (Illustration shown is from the magazine). ESPN rated all 122 NFL, NBA, MLB and NHL teams on how it judged "the strength of each franchise's analytics staff, its buy-in from execs and coaches, its investment in biometric data and how much its approach is predicated on analytics." Teams were slotted in one of five tiers: All-In, Believers, One Foot In, Skeptics and Non-Believers. The Dolphins, Heat and Panthers all rated in the middle ground of One Foot In, while the Marlins are in the bottom rung of Non-Believers. Here is ESPN's synopsis (minimally condensed by me) of each Miami team:

DOLPHINS: Owner Steve Ross and GM Dennis Hickey have become proponents of analytics, and new VP Mike Tannenbaum is a recent convert. Ross is heavy user of analytics in his real estate business and has been frustrated by its relative infancy in NFL. In summer of 2014 team hired Dennis Lock, who holds graduate degree in statistics, to head a football analytics group. At same time Dolphins announced hiring of sports science analyst Dave Regan, and in September, Tom Pasquali, with a graduate degree in applied statistics and experience in Yankees front office, joined Lock's staff. Tannenbaum said in January he planned to hire a "sports performance director" and acknowledged, "We have a long way to go, but we started something in terms of trying to give ourselves a competitive advantage." Miami has monitored player health for several years, and coach Joe Philbin has altered practice schedule to improve sleep habits by becoming only coach to give players Thursday off. But Philbin focuses on game film far more than stats, and it remains to be seen how well he'll use Miami's burgeoning analytics department.

HEAT: When analytics skeptics point out that coaches have been using numbers for decades, Heat president Pat Riley is commonly cited. As coach of Lakers, Riley famously devised his own efficiency rating for players. He passed that interest to protégé and coach Erik Spoelstra, who speaks the language of analytics. Riley devised a system the Heat still use to grade each defensive possession based on 54 criteria, focusing on the process of executing the team's system rather than results. Evaluations are done by Brian Hecker, Miami's director of basketball information technology, who gets the pertinent numbers to Spoelstra. In addition to lineup data, Spoelstra also has relied heavily on a simulation model developed by analyst Bob Chaikin. He has worked for Heat since 2008, following stint as consultant for team during 1990s, when Riley first arrived as coach. "I look at [stats] to evaluate our team, to compare us to other teams, particularly defensively," Spoelstra told NBA.com in 2011. "I also use it to make points to the team about things we need to improve. I use it also for scouting." Riley's fondness for statistical analysis doesn't seem to have carried over to his personnel work as team president. Miami has regularly punted valuable draft picks in favor of stacking bench with fading veterans. Heat's success, including three titles in past decade, has made it easy to justify sticking with an old-school approach. To get back to that level, Miami's front office may have to embrace details like analytics and international scouting that have gone neglected.

PANTHERS: The Panthers were wise to pick Brian Macdonald as team's director of analytics last summer, although they still have a skeleton crew compared to some other teams around league. Integrating him into team's decision-making has been a season-long process because of when he was hired, and his impact may not be felt until next season. "Anywhere there is data in this organization, I've tried to get my hands in it a little bit," Macdonald said. "That includes the business side of things now, also. The past couple months, I've been doing more business than hockey."

MARLINS: Marlins have a small, tight-knit baseball operations department that has shown very little interest in analytics. Team president Michael Hill was a two-sport athlete at Harvard, but like GM Dan Jennings, is a former player with a background in player development and scouting. The job of keeping the Marlins aware of analytics trends falls to director of baseball ops Dan Noffsinger, a longtime staffer who majored in applied math and economics at Harvard. Noffsinger has good reputation but a broader, less technical skill set than the leading sabermetricians being hired by other organizations. In a sign that Marlins might be ready to change their ways, they are looking to hire their first analytics interns this year to get their program off the ground.

HEAT INVITES YOU TO WISH BOSH WELL: Everything is so organized now. For example the Heat on

Monday (prior to beating lowly Philly at home) unveiled a getwellcb.com website to encourage fans to send best wishes to Chris Bosh, who will miss the rest of this NBA season as he undergoes treatment for blood clots in his lungs. Not sure the prompting was needed. Great player, great guy. Everybody rooting for Bosh. (He'll be on blood thinners probably at least through May, but is expected back fully for next season's training camp). 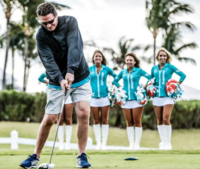 IT'S (STILL) GOOD TO BE DAN MARINO: Dolphins icon (and ambassador and now front-office consultant) Dan Marino tees off during his second annual Marino & Friends Bahamas Weekend event, as a deployed small battalion of the team's cheerleaders stand in the background looking all cheerleader-y. (The excellent photo is courtesy the Miami Dolphins). The Marino event isn't a fundraiser but rather a cross-promotion in which the Dolphins grow their brand in the Caribbean while the Bahamas promotes itself as a tourist destination.


IT WASN'T THE DAYTONA 500 NASCAR NEEDED: A race should not end under a caution flag. Start

there. So it was the antithesis of a thrilling ending in NASCAR's season opener Sunday as Joey Logano (pictured) coasted to the finish. In NASCAR's dream it would have been fan favorite and defending champion Dale Earnhardt Jr. and retiring Jeff Gordon duel-barreling to the checkered flag. Or maybe Tony Stewart finally ending his Dayton jinx. Nope, just Logano under a yellow flag. NASCAR, reeling from the domestic-abuse suspension of Kurt Busch, could have used a result that wowed fans in one of its signature events. Didn't get it. That's racin', I suppose.

Poll result: Hoping Pacquiao wins but predicting Mayweather: We asked your feelings on the upcoming Manny Pacquiao-Floyd Mayweather fight and it was split. Most hope Pacquaio wins, 56.5 percent to 23.4%. But most predict Mayweather will win, 57.9% to 22.0%. (The other 20.1% said they have no interest in the fight).

THE ACADEMY AWARDS REVIEW: Sunday's Oscars telecast may or may not still be going on. The Big 3 winners were Birdman (best picture with Michael Keaton), Eddie Redmayne (actor for The Theory of Everything) and Julianne

Moore (actress for Still Alice). Admit it: No other Oscar category really matters that much except to the winner. Admit it II: You'd never

heard of Eddie Redmayne, either, before last night. Evening lowlight: Host Neil Patrick Harris in his underwear. Admit it III: Against high expectations, NPH wasn't all that good. Summary: Boyhood

took 12 years to make and one night to pretty much ignore. Quick aside: While watching a film called Birdman,

how must Chris Andersen and Bryan Williams feel? Andersen of course is the popular Heat reserve nicknamed Birdman. Williams is better known as the rapper whose stage name is Birdman, co-founder of Cash Money
records. I'm no lawyer but think the two Birdmen pictured at right should sue the movie for royalties. Speaking of the Heat and movies, I cannot confirm that How to Train Your Dragon 2 is the story of how an NBA team works to integrate newly arrived Goran (Dragon) Dragic into its lineup.