It's Radio Tuesday: I'm back in-studio with the Dan LeBatard Show today after a two-week holiday hiatus, 3-7 on The Ticket Miami, 4-7 on ESPN Radio. A new "Back In My Day" segment is in hand. Ears welcome.

DOLPHINS HIRE TANNENBAUM AS DIRECTOR OF FOOTBALL OPS: The Dolphins today hired Mike Tannenbaum, formerly of the Jets, as executive vice president of pro football operations -- the old Bill Parcells role. He reportedly will oversee (and have firing power over) GM Dennis Hickey but not over coach Joe Philbin. Hickey can't be happy, although he reportedly maintains final say over the 53-man roster. What this means: Owner Stephen Ross doesn't quite trust Philbin or Hickey. Dolphins in flux. Again.

On Heat, Panthers: Click on Falling, Rising for today's column by me. It's on how the Heat and Panthers both are headed for a fight just to make the playoffs, and how that's an indignity for one club but a triumph for the other.

MY HALL OF FAME BALLOT INCLUDES BONDS, CLEMENS THIS YEAR: Update: Johnson, Martinez, Smoltz and Biggio elected. I voted for all four. Update 30 minutes before vote announced: The website baseballthinkfactory.org, based on a screening of voters, projects the five inductees today will be, in order of support: Randy Johnson, Pedro Martinez, John Smoltz, Craig Biggio and (narrowly) Mike Piazza. Original post: The latest inductees into Cooperstown are to be announced today at 2 p.m. I became a Baseball Hall of Fame voter for the first time a year ago, and did not include any "Steroids Era" guys on my ballot. It was personal. I felt my first- 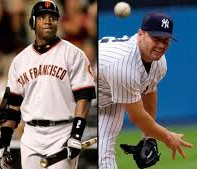 ever ballot should be as "clean" as the sport aspires to be. This year, however, I voted for both Barry Bonds and Roger Clemens (pictured). My 10 votes in all went to, alphabetically: Jeff Bagwell, Craig Biggio, Bonds, Clemens, Nomar Garciaparra, Randy Johnson, Pedro Martinez, Mike Mussina, Gary Sheffield and John Smoltz. For the record I think Johnson, Martinez and Smoltz will get in. I think Sheffield has a good chance. I think Carlos Delgado and Mike Piazza have a shot. I do not think a sufficient 75 percent of my BBWAA brethren are ready yet to join me on Bonds and Clemens. My thinking on those two: Their career numbers are so extraordinary, so enormous, that they would have been Cooperstown-worthy even without PEDs. (I am much less sure on Sammy Sosa, Mark McGwire and others). I also believe the Hall of Fame is not the Hall of Sainthood. I further believe that guys like Bonds and Clemens (yes, and Pete Rose) have been punished enough by their previous barring from Cooperstown and by their public shaming. Of course all of that is moot as I fully expect both men to fall well short of the Hall again today. I respect my colleagues who continue take the highest moral ground on this. Hopefully they in turn respect those of us who have come to think otherwise -- at least on Bonds and Clemens. Here's a poll inviting your thoughts on this. Vote and say why you feel as you do.

Poll result: Guard, linebacker top Dolphin draft needs: We asked what position the Dolphins should target with the top pick in next NFL Draft, and among eight choice offensive guard (34.9 percent) and linebacker (27.0%) dominated. Defensive tackle (15.9%) and cornerback (12.6%) were next.

IT'S ABOUT TIME, FLORIDA: Congratulations to my home state for stepping gingerly into the 21st Century in becoming the 36th state to legalize same-sex marriage. And to Floridian gay couples for finally gaining their equal rights. Who are you, I or the government to tell any loving couple they are second-class citizens? Of course, with gay marriages inevitably will come gay divorces and the spawn of gay-divorce lawyers as a specialty practice. Oh how I wish I were kidding.

BOYCOTT THE SEMI-BEACH BOYS!: The Beach Boys (sort of) play Thursday night in West Palm Beach, but, if you have tickets, beware. You are getting half the product. I'd ask for my money back. This is the version

of the Beach Boys hijacked by frontman Mike Love (pictured), who unfortunately owns the group name. He is touring with only one other original Beach Boy, Bruce Johnstone. The group toured last year with all its original living members -- including Al Jardine, David Marks and, of course, the irreplacable Brian Wilson -- but Love essentially fired the other three. Boycott Mike Love. Boycott the fake, sort of, semi-Beach Boys. (Or at least smuggle in a 'WE WANT BRIAN WILSON!' sign).

Check back regularly because we update and add to our latest blogposts often...