Here's why Dolfans, media have it wrong in blasting Tannenbaum hire; plus Cane to Fins in first round?, Bonds/Clemens verdict & more

1) It is THURSDAY, JANUARY 8. Charlie Hebdo forever. The terroorists don't get it and never will: They don't weaken freedom. They only strengthen it. 2) I'm back at Friday Page Headquarters divining my NFL Division Round playoff picks. 3) In The Previous Blogpost (ITPB): My baseball Hall ballot and poll, Dolphins hire Tannenbaum, Florida gay marriage, semi-Beach Boys & more. 4) Follow us on Twitter @gregcote. Also Facebook, Instagram and Vine.

DOLFANS, MEDIA WANT IT BOTH WAYS, HAVE IT WRONG IN BLASTING TANNENBAUM HIRE: Herald colleague Manny Navarro has a smart post in his "Eye On the U" Hurricanes blog, under the headline, "Mountain of negativity only makes things worse." The accurate and unfortunate point is no matter what Al Golden does or says, he'll be vilified 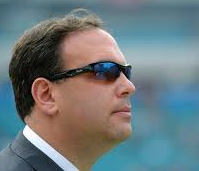 by a waiting mob. Well, the same mindset envelopes the Dolphins in the negativity of too many of their fans and so many of the media who cover them -- as we have seen anew in the wake of yesterday's hiring for former New York Jets general manager Mike Tannenbaum (pictured) as executive vice president of football operations. The perpetually negative wing of the fandom and media would have it both ways: First complaining about the status quo and lack of change ... and then complaining, instantly, in knee-jerk fashion, when the club does something, anything. I hate being a voice of reason here; it's so unfashionable (!). But people are getting way too caught up in organizational flow charts and who reports to whom. Look, cut to the chase: This bolsters the club's front office. Tannenbaum is an experienced NFL talent evaluator and AFC East expert who helped guide two Jets teams to the AFC championship game. Adding his eyes, mind and voice cannot hurt. The reality is this: Joe Philbin is right now still a marginal, yet-to-be-proven commodity as head coach, a guy who very well might have been let go rather than retained after a third straight year out of the playoffs. And Dennis Hickey, though he has done a nice job in his first year as GM, does not have the resume' heft that makes him beyond getting help. If Tannenbaum's arrival underlines that Philbin and Hickey will be fighting for their jobs in 2015, so be it. That was the case even before this move. I don't find the hiring of Tannenbaum to be misguided or ill-timed or any of that. I find it to be interesting and see its potential. Can we at least let the man report to work (his first day is Feb. 1) before we form an angry picket line outside his office?

A CANE TO DOLPHINS IN FIRST ROUND?: Bleacherreport.com has the Dolphins selecting UM tackle Ereck Flowers 14th overall in the first round in its new NFL mock draft. Won't happen. Two reasons. 1) Dolphins need a guard, not a tackle. 2) Flowers could have used another year as a Hurricane and is seen as a maybe-first rounder who could drop to 2R status.

Poll result: Mixed results on Bonds, Clemens and Cooperstown: We asked how you feel about Barry Bonds, Roger Clemens and the Hall of Fame, and seldom do we get such diverse response to a blog poll. A plurality, 33.5 percent, voted "never." However, 29.0% said both should be in the Hall already, 19.9% said it's time to let them in now, and 17.6% said not yet but maybe someday.

Click back a lot because we constantly update and add to our latest blogposts...