"Back In My Day": Complete audio library of every one we've done on LeBatard show; plus Marlins hit big in trade, NFL Pix 'n Fantasy, Philbin verdict & more

'I Can't Breathe': Click on Athletes As Human Beings for today's latest column. I applaud stars like LeBron James for their social conscience on current issues.

"BACK IN MY DAY": THE COMPLETE CATALOGUE: My every-Tuesday appearances on the Dan LeBatard Show (3-7 p.m. locally on The Ticket Miami, 4-7 nationally on ESPN Radio) have spawned a segment called "Back In My Day," in which I ruminate on how things are different now. Yesterday was my 10th one. Unexpectedly the segment has become hugely popular with listeners, and many have emailed or Tweeted me asking how they can access ones that have aired. One way is through the show's podcast. Another I present to you here: The complete catalogue of all 10 "Back In My Days" I have done so far, in chronological order. Enjoy!

AMERICAN EDUCATION: U.S. kids lagging behind -- BIMD #2. Oct. 14, 2014. Sample: "How about you give Angry Birds a rest, put down your iPhone, get off Facebook, tell Iggy Azalea to stop screeching in your earbuds and crack open a bleepin' book!":

MEMORABILIA: The dark side of collectibles -- BIMD #3. Oct. 21, 2014. Sample: "Your 'authentic' signature probably was an expert fake by the team trainer who was grinning like a donkey eating briars as he duped the rubes who would soon buy his forgery.":

SENSORY OVERLOAD: Whatever happened to the simple art of pondering? -- BIMD #4. Oct. 28, 2014. Sample: "Forty percent of people on cell phones are believed to be faking the call in a desperate effort to appear important.":

BRAGGARTS (13.1): We have become a nation of braggarts -- BIMD #8. Nov. 25, 2014. Sample: "I don't assume that person actually completed a half-marathon. I assume they simply bought the window decal in a galling attempt at unearned braggadoccio.":

STATS ON STEROIDS: Sports epitomizes the phrase too-much-information -- BIMD #9. Dec. 2, 2014. Sample: "Now we instantly know the homer's distance down to the millimeter, its exact trajectory, the speed at which it left the park, the number of rotations of the ball and the sphere's Dent Index.":

DIRECTIONS: From asking for directions to Google Earth -- BIMD #10. Dec. 9, 2014. Sample: "Go into a 7-Eleven today, ask for a map and get a blank stare from the clerk. You're made to feel as ancient as Ferdinand Magellan looking for the East Indies.": 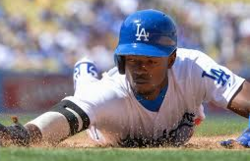 2B Dee "Flash" Gordon (pictured), righty starter Dan Haren (if he doesn't retire), infielder Miguel Rojas and cash considerations to Marlins, and sends pitcher Andrew Heaney and three prospects to Dodgers. I like this deal a lot, largely because it says "today," not maybe someday. It's a deal made by a team that wants to compete now. Gordon, 26, is a leadoff hitter who led MLB in stolen bases (64) and triples (12). Not a great defensive player, but oh that speed. Haren, 35, is an innings eater who'd be a very solid 3-to-5 starter if he agrees to the deal, but even if he retires Marlins get $10 million from L.A. to spend on another starter or a 1B. Hate to see Heaney and his potential go, but the's the "maybe someday," while Gordon (and hopefully Haren) are proven and about winning now.

NFL PIX 'N FANTASY: WEEK 14 SEES GOOD/BAD ON PICKS, LOBOS ELIMINATED: We update you briefly every Tuesday on how we did the previous NFL weekend with our published predictions and our fantasy-

league team. Pix: We again went a fairly solid 11-5 overall but only 6-9-1 (Vikings pushed) against the spread. Nailed our Upset of the Week (Steelers over Bengals; "Aawwk!") and also called Seattle's upset win at Philly and had Bills with points at Denver, but it wasn't enough. Fantasy: Greg's Lobos won, 113-87, led by Calvin Johnson's 30 points, to end strong and finish 7-7. Alas, we tied for the final playoff spot only to be ousted on a tiebreaker. Consolation round, here we come. It's the fantasy equivalent of the 6-6 Canes pretending to be happy about the Duck Commander Independence Bowl.

Poll result: Dolfans support pursuing Harbaugh, not keeping Philbin: We asked, and a plurality of 46.3 percent voted to pursue Jim Harbaugh "no matter what." Another 39.5% said to make a coaching change only if Miami does not make the playoffs, with 19.2% of those wanting Harbaugh and 20.3% preferring someone else. Staying the course with Philbin drew only 10.3%, and 3.9% were undecided.

Check back often because we constantly update and add to our latest blogposts...