NFL Week 2 picks: Good start last night with Ravens winning. Click on Week 2 Gems for all our predictions capsules (have the Dolphins winning, but it's a low-confidence pick), and on Eventually, Forgiveness for our Friday Page NFL column, on the engulfing Ray Rice controversy. Had an earlier column on how Miami suddenly is an "it" team in the NFL. Click on The State of Show-Me to read.

Faint memories of Tony C., and thanks this wasn't worse: My new column on Giancarlo Stanton's injury and how close he came to a career-changing tragedy. Click on Lucky to read.

MARLINS' STANTON HIT IN FACE BY FASTBALL; SEASON LIKELY DONE: The unimaginable struck the Marlins in Milwaukee last night, with Giancarlo Stanton hit on the left cheek by an 88-mph Mike Fiers fastball, 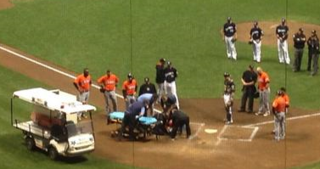 wheeled off in an ambulance cart and almost certainly done for the remainder of the season. Stanton, co-favorite for the NL MVP award with Dodgers pitcher Clayton Kershaw, by rights should not lose his shot at the award over this, but sadly might. Stanton lay in pain for several minutes near home plate, being attended to after the fifth-inning beaning -- the scene pictured -- before being carted off. Incredibly, home plate umpire Jeff Kellogg ruled he swung while raising his arms to defend himself. Reed Johnson came in to finish Stanton's at-bat, also was hit (on the hand), but also was said to have swung. The two dugouts emptied, with Marlins manager Mike Redmond and Casey McGehee both ejected for arguing. What an awful  break for Stanton, who had not missed a single game injured all season and was in the home stretch of a career year. Redmond afterward described Stanton as "bleeding heavily from his mouth" near home plate, adding, "It was scary." Might he possibly return in the final weeks of the season? "It's not looking good," said the manager. "It's devastating for us. Devastating." Medical update from Marlins Friday morning indicates Stanton suffered "facial lacerations requiring stitches, multiple facial fractures & dental damage," but the club said it is not expected he will require surgery. A doctor friend who deals with facial injuries said it was good news no mention was made of an orbital-bone fracture, which would involve the eye and vision, so early indications based on what we know suggest Stanton should be fully recovered by spring training. What bookend misfortune, though: the Marlins lose their two true stars -- Joe Fernandez early in the season to Tommy John surgery, and now Stanton late in the year to this. Best wishes to Giancarlo, a classy, good guy. I hope MVP voters rally around him and don't add insult to his injury by penalizing him for being hit in the face.

AUDIO OF HAWKS GM'S 'AFRICAN' COMMENT ON DENG: The Atlanta Journal-Constitution obtained a 2-minute 22-second audio of the conference call in which Hawks GM Danny Ferry says of Luol Deng (now with the Heat), "He's got some African in him." Comes about midway through. Ferry claimed he was reading from a scouting report, but it sure doesn;t seem like that on the tape. Click here to listen.

CONDEMNATION, FORGIVENESS AND RAY RICE: The revealing this week of the awful video that shows Ray Rice slugging his then-fiancee in a hotel elevator has NFL commissioner Roger Goodell scrambling to keep 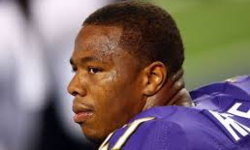 his job and Rice's future in the league in limbo and jeopardy. The Ravens cut him and league suspended him indefinitely amid speculation he'll never play again. I think that's harsh. Plenty don't agree. Rice and Janay Palmer both say he had never struck her before so we must assume this was a first-time offense, appalling as it was. Based solely on that he should be suspended two games (his original sentence) or six games (if the new, tougher rules are applied), and then be reinstated and be eligible to be signed. But some say the graphic video merits a full-year suspension or even a lifetime ban. And even if he were to be reinstated, would any team risk the public-relations backlash to sign him? Rice is 27 and before last season was rated among the NFL's top handful of running backs. I think this poll distills to the shades of gray in one not-simple question: Does Ray Rice deserve a second chance? Vote and say why.

MOST NFL PLAYERS BY COLLEGE: Ex-Canes, Gators and Noles in the NFL are prevalent once more. Top 10 pro-producing schools in 2014 based on opening-week NFL rosters: LSU 38 players, Southern Cal 37, Alabama 36, Georgia 34, Florida and FSU 33 each, Miami 31, Cal and Ohio State 29 each, and Notre Dame and Tennessee 28 each.

Check back often because we update and add to our latest blogposts a lot...