UPSET BIRD COUNTDOWN: 6 DAYS: The Upset Bird and I launch our 24th season

of NFL Friday Page predictions in the Miami Herald in 6 days, on Sept. 5. To celebrate we have a daily countdown honoring notable fictional birds of different species. Today (following Froot Loops' Toucan Sam), we welcome Pierre the Pelican, the new mascot of the NBA's newly re-nicknamed New Orleans Pierres Pelicans.

Today's only Dolphins cuts you should give a crap about: As Miami pared to reach 53-man roster today, the only truly notable cuts were RB Daniel Thomas (former 2nd-round pick certified officially as a draft bust) and utilityman Marcus Thigpen (who was team's main kickoff/punt returner last year). That means one of my favorite players based solely on his name -- RB Orleans Darkwa! -- made the squad.

Invasion of the Football Sections!: Herald's annual preview sections are now out. My three contributions: Dolphins column (Angel, devil duel for the soul of Dolfans); NFL Ranking (I rate teams 1-32, slot Miami as playoff-bound); and Hurricanes column (search continues for Next Great Quarterback).

BETHUNE-COOKMAN 14, FIU 12: PANTHERS LOSE TO OPPONENT, MEDIA: FIU and second-year coach Ron Turner had enough on their hands tonight in their season opener with Bethune-Cookman, a Division

1AA power. FIU lost, 14-12. Coming off a 1-11 season, the Golden Panthers don't have the luxury of any automatic wins on their schedule. But unfortunately FIU is taking on more than its opponents this football season. It is taking on the Miami Herald in a self-defeating feud that is doing nothing but costing the football program coverage and attention and casting it in a terrible, dictatorial light. Click here for a news story to background you. Long-story short: FIU refused a credential tonight for David J. Neal, who covers FIU for the Herald. The school did approve a credential for a columnist (myself) and a photographer, but the newspaper decided it would send no one to cover FIU football as long as FIU continued to try to dictate that coverage. I strongly support the Herald's decision -- and I hope other media, local and beyond, will stand with us. Who is assigned to cover the team or what stories are written is not FIU's decision to make. Athletic director Pete Garcia evidently is upset with Neal over a couple of stories the school would rather have not seen not written, so he chose a strong-arm tactic from a point of weakness. He entered a battle he could not win. FIU, dying for coverage and attention in the long shadow of UM, has just alienated the only media outlet that regularly covers it. Welcome to the real world, Pete Garcia. Time to put on your big-boy pants here. You think UM appreciated the Herald's 1A story about those two football players kicked off the team over a sexual assault on campus? We cover the good and the bad, the whole program, and Neal does so professionally. What's stunning here isn't that Garcia would make an edict that his underlings -- his football coaches and players -- would be forced to suffer. Garcia's reign has been full of power grabs and strange decisions. The real stunning thing is that none of Garcia's superiors -- no FIU administrator -- has shown the spine (or belief in the First Amendment, or common sense) to stand up to him. Until somebody does, FIU football will wear the shame of this. OK that's my opinion. Time for your's. Take a dip in our poll and say why. 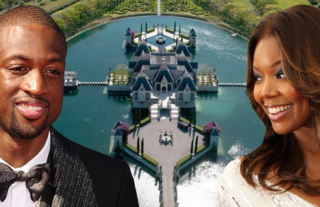 DWYANE WADE'S NOT-SO-SECRET WEDDING: The Heat star and longtime girl Gabrielle Union, the actress, are to be married tonight at a secret location that didn't stay secret, thanks to TMZ. The wedding will be at Chateau Artisan (pictured), a castle surrounded by water in Redland in southern Miami-Dade. Guests have been prohibited from bringing cell phones or cameras and have been made to sign a confidentiality agreement promising no media leaks. (I love that the confidentiality agreement was itself leaked to the media). Unfortunately my invitation to the wedding evidently was lost in the mail. It's a shame because I'd planned to present Dwyane and Gabby with a lovely re-gifted fondue pot.

IT'S THE BLOG RETURN OF THE WEEKLY SOPY RANKINGS!: This is the third season of our blog-exclusive State Offensive Player of the Year (SOPY) rankings, a cumulative weekly updated list of the most productive

quarterbacks, running backs and receivers from the state's seven FBS college football teams: Miami, FSU and Florida, FIU and FAU, and South Florida and UCF. We like to think of this as the "state Heisman." Our simple formula awards a half-point for every passing yard and one point for every rushing or receiving yard, with six points for every TD scored or thrown. Standings are for 12-game regular seasons and exclude conference championship games or bowls, so that all seven teams are on even footing. Here are the final Top 10s from the past two seasons:

Look for our SOPY rankings every Monday in the blog. However, our first rankings for 2014 will appear this Tuesday instead because Miami opens its season Monday night at Louisville.

Poll result: Preseason failed to increase Dolfans' optimism: In the wake of a 3-1 Miami preseason we asked in previous blogpost (you may still vote) if you thought the Dolphins would make the playoffs or not, and 61.9 percent said no. We asked the same question prior to the preseason and it was 61.0% no.

THE MYSTERIOUS LURE OF IKEA: The first Ikea furniture and home store in Miami-Dade opened the

other day in Sweetwater to absurd fanfare and manufactured media coverage. Here is a conversation I imagine between shoppers as they waited for the doors to open: First shopper--"I'm a huge fan of Ikea. I feel good that the nuisance of assembling my own furniture out of a box allows me the illusion I'm saving money." Second shopper--"I appreciate Ikea because what they sell is a perfect fit for my home's 'Dorm Room' motif." Third shopper--"Yeah, and so what if Ikea's founder was pro-Nazi!?"

Check back often because we update and add to our latest blogposts a lot...