1) It is SUNDAY, AUGUST 10. Marlins trade. Club trades P Jacob Turner to Cubs for two minor-league P's, Jose Arias and Tyler Bremer. 2) 'Raising Canes' is a series of videos from a bus tour in which UM football players get into the community and thank their season-ticket holders. It's a brilliant marketing campaign, and well executed. Click here for latest vid. 3) In The Previous Blogpost (ITPB): LeBatard's LeBron homecoming stunt and ESPN suspension, Oden arrest, Scott Mitchell at 366 pounds, Dolphins cheerleaders, unfriendly Miami & more. 4) Follow us on Twitter @gregcote. Also Vine and Instagram.

PS1: ATLANTA 16, DOLPHINS 10: TANNEHILL SHARP EARLY IN EXHIBITION LOSS: I won't overanalyze a fake-game of limited meaning (leaving that to others), so let's say what stood out was Ryan Tannehill going 6-for-6 with a TD pass to Brandon Gibson in an impressive early showing. That first series spoke well of the potential for Miami's new offense. Some nice work on kickoff and punt returns also has to have the special-teams coach sleeping well. The first units did not play long enough to form many conclusions beyond that. Original post: NFL preseasons mean very little and exhibition openers especially are generally not very revealing, although Miami at Atlanta

tonight has a little extra sizzle to it if only because HBO's Hard Knocks cameras are following the Falcons this month. (Quick aside: The Falcons are not very interesting and coming off a 4-12 season as HBO increasingly finds bigger, better teams turning it down. It may be time to retire the series). The reality-show cameras mean the Dolphins' performance will be unusually spot-lit for a preseason opener. Miami fans hope the cameras are documenting an exciting new offense. Beyond glimpses at practices and in a controlled scrimmage tonight will be the first real look at new offensive coordinator Bill Lazor's up-tempo attack and how well Ryan Tannehill operates it. Even just a few series by the first-team offense will give us indications of what the Dolphins have here. Miami has not had a dynamic offense in a long time, as I document in today's latest column. Click on Points, Please to read the column. Miami has not had a top-10 NFL offense in points scored since 2001 and last finished in the top-10 in most yards in 1995 -- the second-longest droughts of any team in both categories. An offense that notably added Branden Albert, Ja'Wuan James, Knowshon Moreno and Jarvis Landry should be better -- especially if Tannehill proves ready to take the next step in his evolution. Tonight we'll be looking for signs.

POLL: DOLPHINS' TOP NEWCOMER/BIGGEST ADDITION? IT'S TOO CLOSE TO CALL!: I did not fully appreciate how significantly the Dolphins have changed until assembling this (alphabetical) poll list of new additions. Scan it, vote for the three (3) men you think will have the biggest positive impact on this season, and say why. Remember, you may vote for three:

ZO'S BIG NIGHT: Longtime Heat center Alonzo Mourning was among 10 inductees Friday night into the Naismith Memorial Basketball Hall of Fame in Springfield, Mass. He is pictured holding his Class of '14 Hall jersey. I spoke at length with Zo earlier this week an appreciation about him in today's latest column. For combined accomplishment and overcoming adversity, I don't know that South Florida ever has had a more remarkable athlete. Mourning was a Georgetown star, an Olympic gold medalist and helped Miami win its first NBA championship, but his triumphs off the court define the man better. Click on Zo And His Angels to read the column. (One sidenote from the induction ceremony. Everybody talked too long. I think Nolan Richardson, enchanted by his own voice, might still be talking).

Riley's "video message" to Heat fans: Heat released it Friday; click HERE to watch and listen. In it, Pat Riley is very optimistic and forward-looking, as you'd expect. More interesting, to me, is that it was released on the day of LeBron James' homecoming celebration in Akron. 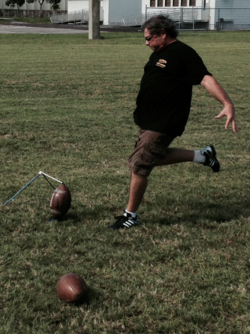 50 YARDS FROM GLORY: Those listening to my appearance on The Dan Le Batard Show With Stugotz this past Tuesday may be aware that I was prodded into attempting a 50-yard field goal. It came up that, while in my 20s, I once won a bet by parlaying my then-youthful athleticism and active soccer skills to make a 50-yard field goal on a dare/bet. Three decades later, just for fun, I am trying to defy logic, time and distance and do it again. I'll make my attempt (with 25 tries) this coming Tuesday, to be documented on-air during Dan's show. Pictured at right is me at a Thursday practice session. Not sure I like my chances, but I hope to like them a little more after training today/Saturday with a kicking coach, Tim Conrad of St. Thomas Aquinas High School. Updates to come.

Click back often because we constantly update and add to our latest blogposts...