1) It is TUESDAY, JUNE 24. No radio today. The Dan Le Batard Show is on vacation, so you get a break from me, too. 2) Congrats to Neal Gulkis, new media-relations guy at Homestead-Miami Speedway. Was with Dolphins for many years. 3) In The Previous Blogpost (ITPB): Futbol! World Cup and U.S. draw with Portugal, debut of Sunday Hot Button Top 10, Heat get-a-grip poll result & more. 4) Join us on Twitter @gregcote. Also Vine and Instagram.

My new column on LeBron's opt-out: Click The Fight Is On for my column on LeBron James' future in the wake of his opting out of his Heat contract today. It's newly online and shipping to Wednesday's inky pulp editions. 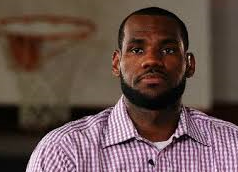 LEBRON'S OPT-OUT EXPECTED, NOT AS OMINOUS AS IT SOUNDS: LeBron James' agent informed the Heat this morning that his client will opt out of his Miami contract and become an unrestricted free agent on July 1. This is not a surprise; club president Pat Riley called it "fully expected" in a statement released at about 1:15 p.m. This development therefore should not send Heat fans to a high ledge. As for the haters and overreactors, James had every right to do this and it should not be taken as a sign he's leaving. Yes, it could mean he is serious about testing free agency and possibly leaving for another team. But the opt-out could also be more of a procedural thing, a first step toward restructuring his deal for less money in concert with Dwyane Wade and Chris Bosh to remain together. This is a fight Miami can and should win -- as long as Pat Riley convinces LeBron his supporting cast will be stronger than the one that fell short in 2014.

FUTBLOG! WATCHING U.S.-PORTUGAL IN THE BELLY OF THE INSANITY: FUTBLOG! is the official World Cup post of this blog, a continually updated daily dose of the month-long soccer spectacle in Brazil. See

Hollywood, in a bar more crowded than anywhere I have been. (Relegated to runnerup: Bourbon Street at the apex of Mardi Gras). The photo at left does not convey the insane population density in the place. Fire codes were surely shattered. Waitresses carrying trays of beer and shots and food could barely navigate through the crush. Check me on Twitter or Vine for several videos from the game/party and for a great sense of the noise and atmosphere. I'd gone at the invitation of my son and some of his friends, not knowing what I was in for. Turns out it was the official watch party of the local chapter of American Outlaws, a U.S. soccer fan group. I mean, I was at ground zero of fanaticism for this team, this game, this sport, this World Cup. The place was a sea of red, white and blue. I and others stood on bench seats for a better view. Beer sprayed in celebration at U.S. goals. Chants erupted throughout the game. Some guys near us recognized me and started serenading my joke chant, "Let's gooooooo States!" (Which I must say was both a cheap thrill and excruciatingly embarrassing at the same time). I'm a lifelong soccer fan and a patriotic guy so this was right in my wheelhouse. I wore a U.S. soccer shirt and U.S. hat I'd bought while covering the 1994 World Cup held here. My voice today is hoarse from all the cheering. There is no wrong way to be a fan. But I must say, if you were watching the game with a couple of buds at your house, you were not getting the full experience. All of us though were denied the ultimate celebration by Portugal's tying goal with 39 seconds left. All of Mickey Byrnes Irish Pub sagged, went numb. Nevertheless, it was inspiring to be there amid the passion, to get a real feel for the grass roots of U.S. soccer fans, and to understand that thousands of watch parties just like this one were going on all over the country.

U.S. scenarios to advance: The U.S. would have clinched a spot in the round of 16 by winning last night but still is in good shape even with the draw. Click on Road to the Sweet 16 for all the scenerios involved. America advances with a win or draw vs. Germany this Thursday. We can also advance with a loss if Portugal-Ghana tie or by winning the goals-differential tiebreaker with the Portugal-Ghana winner. Computer odds for tghe group put Germany's likelihood to advance at 99.7 percent and the U.S. at 75.8%. Ghana is at 19.1% and Portugal 5.4%.

HOW CLOSELY ARE YOU FOLLOWING THE U.S. IN THE WORLD CUP?: This poll result interests me for two reasons. First, this is in no way a soccer blog. For all I know there might be a lot of readers wishing we'd get off this soccer thing and get back to the Dolphins or Heat or something more in their mainstream. Second, soccer in general shows a great divide in interest. Fans tend to be passionately interested, as with the crowd I describe in the top item here, or barely if at all paying attention. Although, the World Cup tends to draw even soccer agnostics into paying at least casual attention. I'm curious where you stand and where our blog readers in general stand on this. Vote and say why.

World Cup Day 13 / Today 6-24: Match of Day: Costa Rica 0, England 0 (Group D): The Brits are the latest big team to be sent packing as -- astonishingly -- Costa Rica's Los Ticos win the group. You wanted a Cinderella, World Cup? You got one.

Day 12 / 6-23: Match of Day: Mexico 3, Croatia 1 (Group A): Credit to Mexico. El Tri needed at least a draw to advance to the round of 16 but left no doubt with a three-goal flurry within 10 minutes. Mexican fans are easy to dislike with their homophobic chants, but I respect that their team was fortunate to even qualify for the World Cup but is now making the most of it.

Spain 3, Australia 0 (Group B): Defending champ  Spain alreday had been eliminated but save a bit of face with this result.

MIKE POUNCEY'S TAILSPIN: The Dolphins center had hip surgery today and is expected to miss at least the first two games of the regular season. The injury is just the latest. Pouncey was a figure in last year's Bullygate mess, embarrassed himself with a related Tweet, and was photographed wearing a hat in support of accused murderer Aaron Hernandez. Above and beyond this injury, I wonder about his decision making. I wonder if he is just coming into the prime of a Pro Bowl-caliber career, or if we have seen his best and can expected a flameout. That may be harsh. Let's find out.

HEY, LOOK. IT'S VENUS WILLIAMS. AND SHE'S NAKED!: ESPN The Magazine's annual 'Body' issue hits newsstands July 11, and the WorldWide Leader commenced pimping it today by revealing (literally) that tennis star Venus Williams will be among the athletes carefully baring all without actually baring any private parts. Here, in all her artfully displayed splendor, is Venus.

Click back often because we update and add to our latest blogposts a lot...