"He keeps crying about other teams helping the Heat. Somebody hand poor Bill Simmons a hanky." --Greg Cote

Betting odds on LeBron, 'Melo, rookie of year: From our friends at Bovada today, LeBron James is a prohibitive 1-6 favorite to re-sign with Miami, with his going to Cleveland next at 5-1. Carmelo Anthony is even 1-1 to land in Chicago, then it's 2-1 to re-sign with Knicks, 5-1 Heat and 11-2 Houston. Rookie of the year odds find Jabari Parker (5-1) and Andrew Wiggins (11-2) near co-favorites, with the Heat's Shabazz Napier tied for eighth at 12-1.

HEAT DRAFT-NIGHT TRADE FOR NAPIER A PLEASE-STAY GIFT TO LEBRON: From across the Miami bow came an undisguised volley in The Battle for LeBron James last night when the Heat's draft-night trade with Charlotte brought point guard

Shabazz Napier of UConn. It would not have been any more obvious if at the Heat draft table they'd held up a sign that read, 'This one's for you, 'Bron.' Napier is a favorite of LeBron's, and based on the kid's shirt at right, the feeling is mutual. Said Napier: "For one of the best players in the world to be intrigued by my talent is something so special to me. I appreciate it." Only Napier's lack of height (6-0) kept him from being perhaps a top-10 pick. He finally went 24th to Charlotte, with Miami giving up its 26th and 55th picks in this draft, a 2019 second-rounder and cash considerations to get him. They were smart to. Beyond the considerable LeBron factor, he fits a Heat position need. (Sorry, Mario and Norris). "Shabazz Napier is a winner, he’s a two-time NCAA champion and he’s one of the elite players in college basketball," said Heat potentate Pat Riley. “We feel very fortunate we were able to acquire him and we feel like he fits in extremely well. He has a high motor, high basketball IQ, is a great shooter and has great character." Napier despite his height and position averaged 5.6 rebounds as a senior and was a first-team All-American. He also avearged 40.5 percent from 3-point range as a senior, a welcome number for a Heat team needing to retool its long-range game. This was a smart trade toboth fill a need and to make LeBron happy. And isn't that the whole idea right now as Mr. Opt-Out sashays into free agency? Riley normally doesn't care much about the draft, but he did this time, and all knew why. 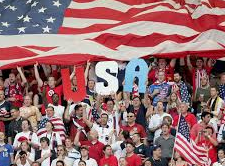 especially in time of possession and ball control. The good news, the only news that matters: Even in losing Team USA advances to the round of 16, the knockout round -- the general measure of a successful World Cup for the States. The Americans'  earlier 2-1 win over Ghana and 2-2 draw with Portugal left the U.S. with four points and big hopes entering this group-play final. Team USA would have advanced with a win or draw, or with a loss if it enjoyed the final goal-differential (tiebreaker) edge over the winner of Ghana-Portugal. And that happened. The U.S. was plus-2 over Ghana and plus-5 over Portugal. That meant astute American fans were rooting for Portugal, which won, because of the greater margin of error. My impartiality, of course, was out the window as always. "U-S-A! U-S-A!" Or, as I and my Twitterers like to say, "Let's Gooooo States!"

Portugal 2, Ghana 1 (Group G): One of these teams could have advanced because of the U.S. loss, but neither did what it needed to. Ghana was minus-2 goals vs. the U.S. so would have had to win by two goals here to knock out the Americans. Portugal was minus-5, too much margin to reaslitically make up even in victory. That's why American fans were rooting for Portugal.

Belgium 1, Korea Republic 0 (Group H), 4 p.m.: Belgium already had clinched advancement but sealed the group win and facingf the U.S. next. South Korea could only advance if Russia had beaten Algeria and the Koreans made up a 1-goal tiebreaker differential to the Russians. Didn't happen.

Algeria 1, Russia 1 (Group H), 4 p.m.: Algeria would advance with a win or a draw so got what it needed. Russia needed a win. Sorry, Putin.

World Cup scoring statistics through today and through group play: 48 matches, 136 goals, 2.83 per.

House this week as LeBron James, Dwyane Wade and Chris Bosh met -- no, had a summit! -- for lunch. Undisclosed sources reported they all had salad. I managed to bug the table but one of the Big 3 must have put his man-purse on my hidden mic because most of the conversation was useless, muffled garble. But I did make out this one mid-lunch exchange, which sheds exclusive light on the free-agency plans of the Big 3 and thus of the Heat's future:

Bosh: "Mmm. This tart raspberry vinaigrette marries so well with a mesclun-arugula mix."

Reports of the summit naturally caused a social media firestorm. I love that the three had such high security and guarded their privacy with such care. Dear Big 3: IN the future, if you really want privacy, may I suggest you consider NOT MEETING IN PUBLIC. You ever consider a nice catered lunch at one of your mansions? As opposed to, say, making a midday spectacle on South Beach? The answer to that rhetorical is that they obviously love the spotlight and attention. And, Lord knows, we give it to them.

HOCKEY TALK! BIG WEEK FOR PANTHERS: Everybody's talking about the World Cup or the Heat and

LeBron so naturally my latest column today is on ... hockey. OK so I don't lead the league in timing. Sue me. Actually my timing isn't bad. This has been huge week for the Panthers, first introducing a new head coach, Gerard Gallant, and now holding the No. 1 pick in tonight's/Friday's NHL draft. Of course both those spotlights are for the wrong reasons, since new coaches and high draft picks both are indicative of losing, an unfortunate Cats pattern for too long. Click on Trying to Turn A Corner for my column on the state of the Panthers, and the onus on general manager Dale Tallon. Gallant is pictured, looking like he wants to beat somebody up. Quick aside: What are the odds that one sports town would have major head coaches named Golden and Gallant? I'm just asking.

Click back often because we update and add to our latest blogpost a lot...