MORE ON LEBRON, HIS OPT-OUT AND HEAT'S DRAFT PLAN TO KEEP KING HAPPY: It was expected. It should not cause overreaction or panic to ricochet among the Heat faithful. On the other hand, it does signal that the time has begun for Pat Riley and his empire to take off the gloves and fight to keep the franchise's one essential player. Click on The Fight Is On for today's latest column by me. Meantime San Antonio takes a shot at LeBron with the billboard at right. LeBron has a chance to make a loyalty statement of his own by staying in Miami. Thursday's NBA Draft could be a small way to make LeBron happy and keep him. Miami is trying to trade up from 26th to select UConn point guard Shabazz Napier, ESPN's Chad Ford first reported. Doing so would address a Heat need and also please James, who is a big fan of Napier's.

IT WILL BE AN INDICTMENT OF SPORTS FANS, BASEBALL AND AMERICA IN GENERAL IF STANTON IS NOT VOTED AN ALL-STAR GAME STARTER: This is a homer cause by me. Literally. I'm a homer for doing it, and I'm mostly doing it because of homers. Fans will elect three NL outfield starters for the all-star game. The 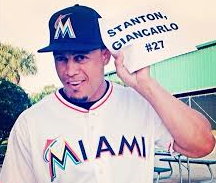 Marlins' Giancarlo Stanton is currently running fourth in voting. This is criminal. Stanton and the three guys ahead of him -- Dodger Yasiel Puig, Pirate Andrew McCutcheon and Brewer Carlos Gomez -- all have around the same batting average. But Stanton leads all of them by a lot in home runs (20), RBIs (58) and OPS (.993). The other three are having nice seasons; Stanton is putting up MVP-caliber numbers. An all-star start should be a no-brainer. (So should a spot in the Home Run Derby, a role he'd like to have, in a competition made for a classic sluggers like him). So I call on Marlins fans (they're out there, trust me) and fair-minded baseball fans in general to click HERE for the MLB all-star ballot and get behind Stanton. He has earned your support. I'm Greg Cote and I approve this message.

Poll result: Passionate following for U.S. World Cup team: We asked how closely you are following the U.S. team in the World Cup and 56.3 percent answered "passionately." Another 31.4% said "casually" and only 12.3% said "not at all." Perhaps some in the latter group are following the event but with other allegiances. To American sports fans stubbornly uninterested, you don't know what you're missing.

World Cup Day 14 / Today 6-25: Match of Day: Switzerland 3, Honduras 0 (Group E): schedule: The Swiss entered the game unlikely to advance, two goals behind Ecuador in the tiebreaker, but won by three to sneak into the round of 16 as Ecuador suffered a costly draw. Honduras, needing a miracle, was eliminated.

Ecuador 0, France 0 (Group E): France advances comfortably with the draw, but the draw was a killer for Ecuador and eliminated it. Ecuador enjoyed a two-goal edge over Switzerland in a tiebreaker but the Swiss win erased the need for a tiebreaker.

Click back often because we update and add to our lagest blogpost even often-er...