1) It is FRIDAY, JUNE 13. The National Congress of American Indians has an eloquently powerful new ad campaign against the Washington Redskins nickname. Click here for the 2-minute video. 2) In The Previous Blogpost (ITPB): Heat-Spurs Game 3 loss and postgame video, postseason MVP standings, LeBatard wins ratings, glamorous life of sports writer (not), Futblog! and more. 3) Join us on Twitter @gregcote. Also Vine and Instagram.

Check out the debut of our separate World Cup FUTBLOG! in the post directly below this one.

Click on Dream Crashing for my column from the arena off last night's Heat loss.

G4: SAN ANTONIO 107, HEAT 86: MIAMI DOWN 3-1 AFTER LEBRON SCORES 28, NOBODY ELSE SHOWS UP: Stunning, this game. This performance or lack of by Miami. With everything on the line the Heat barely showed up in a 21-point loss that puts Miami down 3-1 in the Finals and fighting for its three-peat life as the series heads to San Antonio for Game 5 Sunday. The Heat had been on a 13-0 run following a playoff loss before the second straight defeat. LeBron James scored 28 and hardly anybody else bothered to show up, with Chris Bosh next-highest Heat scorer with 12 points. Dwyane Wade had 10 on miserable 3-for-13 shooting. What do I mean by "all but out of hope" in the blog's headline? This: No team in NBA Finals history has overcome a 3-1 deficit to win the championship. Click on Dream Crashing for my column from the arena off last night's loss. ..... Original post: Question: Can the Heat win tonight without Melo? Just kidding. But they'd better. I resist saying or writing "must win" because it's a cliche due to too-casual use. People say "must win" when it literally is not; they use it interchangeably for "important game." Anyway, tonight may not be a must-win literally 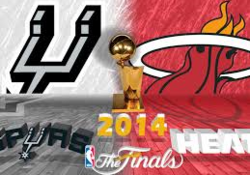 for Miami (trailing the Spurs 2-1), but it is in every other sense when you fathom the alternative. No team in NBA history has trailed 3-1 in the Finals and rallied to win the title, and the Heat

down 3-1 would need two of those three straight wins to come in San Antonio. Impossible? No. Unlikely. Oh, very. That's what tonight is about: Keeping three-peat hopes realistically alive. The pressureis all on Miami coming off a thorough Game 3 spanking on its home floor. The Heat has played 48 consecutive playoff games since last losing two in a row -- 13-0 following losses in that streak -- but the Spurs convey the impression they may be good enough to beat Miami even when the Heat is playing well. And the Heat were miles from playing well the other night. A few of the improvements needed tonight for the Heat to have a chance in Game 4: Hugely better, intense defense by Miami. A positive impact by point guard Mario Chalmers, who has been a Finals nightmare. More involvement from Chris Bosh, who took but four shots Tuesday. And more composure after Tuesday's 20 turnovers including a Finals-record seven by LeBron James. I'd also expect to see James in attack-paint mode after getting to the free-throw line only three times in the last game. The two-time defending champs had better play like it's a must win tonight, because, in all but the literal sense, it is.

OUR GAME 4 POSTGAME VIDEO: That'll be Heat beat writer Joseph (Goody) Goodman on the left looking natty. I'm the guy who looks like a homeless man who wandered in off Biscayne:

WHO IS BOBBY RAMOS AND WHY IS HE HAUNTING THE HEAT WITH AMUSINGLY ACCUSATORY QUESTIONS?:

I'm really looking forward to tonight's Heat-Spurs Game 4 in Miami, especially the pregame or postgame interview sessions in case Bobby Ramos materializes again to rock the lavender shirt and pose lengthy, meandering, accusatory questions to the Heat. (Actually I am praying for a Spurs loss and the Ramos Treatment for a moody, hairtrigger Gregg Popovich, because there could be a delightful explosion). Ramos, the NBA Finals' Media Internet Sensation Because We're Bored, demanded Erik Spoelstra explain why his team had been "stomped" in Game 3, eliciting the classic one-word response, "Clearly." Ramos later demanded at length that LeBron James and Dwyane Wade explain why the team's offense and defense had been so "lackluster," a bizarre grilling that found James stifling laughter and Wade offering an indulgent, "The problem is we're down 2 games to 1. That's the problem." Ramos is the latest face of a growing trend I call The Quasi-Journalist. He is a former Connecticut cop who evidently runs a small website called the Bottom Line, which has crashed for a lack of bandwidth. He previously masterminded Bobby's Lobby, a blog last tended in 2010. In the social media age, the media pool is murky and crowded now with all manner of mysterious bloggers and sort-of reporters, with legitimate and mainstream media now made to share the same umbrella with a "reporter" in a wedding dress proposing marriage to Tom Brady. It has become likely now that sharing a row in any major-event interview room might be an on-air star for ESPN, a columnist for the New York Times, and Ralphie Bimtoddle of TheRalph.com, who has watched no games but consistently delights his 29 Twitter followers. Into Super Bowls and NBA Finals wander all sorts of Quasi-Journalists because evidently the vetting in the credentialing process now consists entirely of you asking for a credential and the NBA saying, sure Ralphie. This is not a direct slam on Bobby Ramos, mostly because he looks like a guy who could beat me up with a well-aimed stare. Quick advice for Bobby tonight: Popovich especially after a loss enjoys questions that are never-ending and second-guessing in nature and actually more statements than questions. Please don't ask until I'm in the room!

ESPN SAYS HEAT IN DISCUSSIONS TO SIGN CARMELO ANTHONY: The nut graph in a new story by ESPN's Brian Windhorst and Marc Stein: "Sources told ESPN.com that Heat officials and the team's leading 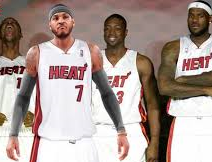 players have already started to explore their options for creating sufficient financial flexibility to make an ambitious run at adding New York Knicks scoring machine Carmelo Anthony this summer in free agency." Click HERE for the full story, and HERE for a subsequent detailed analysis on how Miami could make it work under the salary cap. [Update: Chris Bosh said today the Big 3 have not discussed such a thing and called it "very unlikely" to happen]. ESPN saying it doesn't necessarily mean it's true or will happen, but it does mean it's loud, and now whistles and clangs over the ongoing NBA Finals that resume Thursday here with San Antonio up 2-1. It's an ill-timed distraction for the Heat. The story speculates that key Heat players may be willing to make yet more financial sacrifices to make this work, noting that LeBron James is doing fabulously off the court at the bank, including a $30 million windfall due him related to Apple's $3 billion purchase of the Beats By Dre company. The story is believable for a few reasons. The two writers are credible; Windhorst because he is a lifelong friend of LeBron's. James and Anthony are close friends. And Miami (see below) needs to beef up its roster even if it manages to three-peat. Melo, of course, would be Grade-A beef on the offensive end. So, perhaps, the NBA's era of raging jealousy against Heat mastermind Pat Riley sees no end as the Big 3 plots to become the Big 4.

BAD: MARIO CHALMERS' PLAY. WORSE: NEEDING HIM THIS MUCH: That's the gist of my latest column, newly online and in today's/Thursday's inky pulp editions. Click on Missing The Point (Guard) for the full column. Chalmers has been awful in the Finals, but needing him this badly underlines a larger issue: The Heat's glaring lack of depth beyond the Big 3 when contrasted with the Spurs.

Click back often. We are always updating and adding to these latest blogposts...