Panthers hire coach: Montreal Canadiens assistant Gerard Gallant is the new man. Not sure if it's a great hire, but am sure his surname lends itself to a million awful headline puns.

Reader alert on Sunday notes column: Our Sunday notes-column package is on summer hiatus beginning this week, due to return in August. Meantime I'll interperse elements of it into our blog, including a Sunday list of "Things South Florida Sports Fans Are Talking About" starting this weekend.

GOT A GRIP? YOUR VERDICT ON THE HEAT'S FOUR-YEAR BIG 3 RUN: Heat potentate Pat Riley made quite an impact with his annual post-mortem news conference this week; click on Get A Grip for my 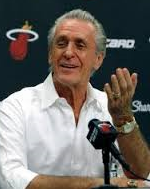 column off it. His premise in telling everybody to "get a grip," in the context he said it, was to gently admonish any fans who are too upset by the recent NBA Finals loss to San Antonio to see this four-year run of four straight Finals appearances and two championships as anything but an unequivocal success. I thought Riley volunteering that was interesting mostly because it presumes a disappointment or even anger that I'm not sure is out there. I don't hear a lot of Heat fans moaning about underachievement or dissatisfaction. My impression is that most fans are pretty damned satisfied by four shots at the crown and twice taking it. But since I am occasionally wrong, and since Riley sort of brought it up with "get a grip," I want to toss up this poll to get a grip gauge on how fans judge this four-year run of the Big 3. (I purposely didn't include "failure" as a poll option, just to annoy the Heat-hating Twittidiots out there). Vote for the answer you think is most reasonable and say why.

MARLINS COMPETING, EXCITING: The Marlins are fun this year. They're one game back in the NL East, hanging in on the playoff chase despite the loss of Jose Fernadez, whose injury was supposed to send the season reeling. Earlier this week young ace Andrew Heaney made a terrific big-league debut. Last night the Fish win on a walk-off throw, a bullet from Marcell Ozuna in the outfield. Team is seldom on the national radar for the right reasons, but they'll be one of the stories of the year -- and Mike Redmond the manager of the year -- if they somehow make the playoffs.

CATCHING UP WITH RICKY WILLIAMS: Former Dolphin Ricky Williams, the free spirit, now  is an assistant coach the the University of the Incarnate Word in Texas. Click HERE for is a well-done video updating you on Williams.

Day 10 / Today 6-21: Match of Day: Germany 2, Ghana 2 (Group G): After a scoreless half a four-goal flurry within 20 thrilling minutes. The U.S., in the same group, hoped for a Germany win. Ghana's point puts a bit more pressure on the American to win tomorrow, not draw, and certainly not lose.

Argentina 1, Iran 0 (Group F): The Argentines, my personal pick to win the World Cup, struggled before finally scoring in the opening moments of extra time on Lionel Messi magic, and advancing.

Day 9 / 6-20: Match of Day: Costa Rica 1, Italy 0 (Group D): One of the bigger upsets in the World Cup so far. Costa Rica winning a game like this is partly why I was upset by Jurgen Klinsmann suggesting the U.S. had no chance to win the World Cup.

Click back often because we update and add to these latest blogpost with a startling, unending flurry...