1) It is THURSDAY, JUNE 19. Thanks to Colin Cowherd for having us on the Herd yesterday. 2) In The Previous Blogpost (ITPB): How-much-faith-in-Dwyane Wade poll, Heat betting faves for '15, final postseason MVP standings, FUTBOL! WorldCup including U.S. win and more. 3) Join us on Twitter @gregcote. Also Vine and Instagram.

Potentially huge news on Redskins name: The U.S. Patent Office ruled the nickname Redskins as disparaging and ordered trademark rights canceled. Story here. Could be a significant step in ongoing pressure on NFL and Washington to change the nickname.

PAT RILEY: "GET A GRIP!": Heat president Pat Riley today softly scolded fans and media and even his own players who in any way are disappointed by two NBA championships out of four straight Finals appearances. Click on Get A Grip for my column off today's Riley session, now newly online and shipping to Friday's inky pulp editions. And below is a new, related video with myself (left) and colleagues Barry Jackson and Joe Goodman:

HOW FREE AGENCY AND THE  BIG 3 WILL SHAKE OUT FOR THE HEAT: The next month's insanity over the future of the Heat's Big 3 got off to a proper start with Dwyane Wade's it-spoke-volumes

no-show at the team's post-mortem media session, amid speculation whether he'd be better coming off the bench and a general perception (see poll result below) that he's a falling star. As LeBron James, Chris Bosh and coach Erik Spoelstra were talking and saying as little as possible, a report wafted across the Internet that LeBron had enrolled his two young sons in an Ohio school for the coming year. OH MY GOD! Except it wasn't true. Buckle in, Heat fans. It's going to be a rumor-filled, tea-leaves-reading summer until this thing plays itself out. Will it be an agreeable, smiling Big 3 (left) accepting financial hits for the greater good in Miami? Or will it be an apprehensive Big 3 (right) tired of turning down millions and seriously exploring options? Take a dip in our poll and tell the world what you think will become of the Big 3 in Miami. Come back intact? Or no? Vote and say why.

Betting odds favor LeBron staying in Miami: Bovada doesn't have a line on our poll question but tells us that LeBron is a 1-3 favorite to re-sign with Miami. Then it's Cavaliers at 7-2, Bulls and Rockets both 13-2 and Lakers a longshot 15-1.

Poll result: Most see Dwyane Wade as in decline: Granted the timing was rough, with poll coming in wake of his two bad games to end Finals. But 62.7 percent said Wade is in decline vs. only 25.4 % who said he's still all-star caliber. Only 3.7% see him as still elite, and 8.2% were undecided.

DEAR JOE PHILBIN: A LITTLE HONESTY, PLEASE?: We've been purposely avoiding the Dolphins lately, because of A) mandatory Heat obsession and B) the fact that the NFL in May and June doesn't matter 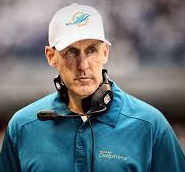 even though the teams are sporadically practicing in their OTA's and minicamps. But a Dolphins practice this week caught our attention because of the disparity in how the day's work was viewed by coach Joe Philbin and by quarterback Ryan Tannehill. Philbin: "I really liked the way we started off the mini-camp. I thought the practice had excellent energy." Tannehill: "Today wasn’t our best day. We’ve had much better days as an offense all around, getting lined up, playing fast, throwing the ball, protecting, all around. We just didn’t have our best day today. It was a frustrating day." Two quick thoughts: 1) I like the indication of emotion and public disatisfaction by Tannehill. That shows growth, and leadership. 2) Half his team could be felled by heat stroke and the other half swallowed by a giant sinkhole and Philbin would say the practice went great. Honesty wouldn't kill you, Joe. Maybe your team could use a public kick in the a-- once in a while. If your QB isn't satisfied and says so, that's honest leadership you might consider trying.

CANES FASHION THEMSELVES A QUARTERBACK CONTROVERSY: UM coach Al Golden doesn't know who his quarterback is as the season chugs ever nearer. It was senior Ryan Williams, before his knee injury and

surgery that could have him unavailable for a substantial chunk of  the season. Then the starting baton was taken by redshirt-freshman Kevin Olsen, but he was awful in the Spring Game (7-for-21) and hasn't done much to inspire faith that he's ready. Now in comes transfer Jake Heaps (pictured), who already has graduated (Kansas) and is available immediately. He brings experience, having thrown 896 major-college passes (BYU, Kansas) with 32 TDs and 27 interceptions. I foresee him winning the job from Olsen. But is the job then Williams' whenever he is ready? Lots of uncertainty swirling around at The U with the most important position. On the bright side? None of the Canes' quarterbacks has stolen any crab legs.

FUTBLOG! BRITS, COTE IN ACTION TO HIGHLIGHT DAY'S CARD: FUTBLOG! is the official World Cup post of this blog, offering continually updated daily news and summaries on the month-long soccer quadrennial in Brazil. (See earlier posts for earlier results including the U.S. win, and for group-by-group preview). England returns to action to top today's card. My personal non-U.S. favorite, Cote d'Ivoire, also is in action.

Day 8 / Today 6-19: Match of Day: URUGUAY 2, ENGLAND 1 (Group D): If you're British, you feel broken. England is headed home, failing to get out of group play with today's defeat. Isn't as big a World Cup disappointment or surprise as Spain's similar fate, but close enough.

Greece 0, Japan 0 (Group C): May I be honest? A scoreless draw between Greece and Japan is the World Cup nadir for me thus far.

Day 7 / 6-18: Match of Day: CHILE 2, SPAIN 0 (Group B): You wouldn't want to be Spain's national coach right now. The defending World Cup champions were eliminated in group play with today's loss sending Spain packing at 0-2 and outscored by 7-1. La Furia Roja are first reigning champs ever to lose its first two matches, and head home as defending chumps.

Netherlands 3, Australia 2 (Group B): Predictable Dutch letdown after big opening win over Spain, but the (much) better team prevailed.

Croatia 4, Cameroon 0 (Group A): Crotians dominant in elimating Cams from the tournament.

Note: ESPN says its World Cup viewership is up 172 percent over 2010 through 17 matches. Impressive. Yell that at whomever you know who's still in the Dark Ages on soccer.

Click back often because we update and add to our latest blogposts often...