WADE, HASLEM JOIN HEAT'S OPT-OUT CLUB, BOSH TO FOLLOW: LeBron James made public his verdict before he had to, now the deadline clock was ticking for dos and tres of Heat's Big 3. Dwyane Wade and Chris Bosh needed to reveal 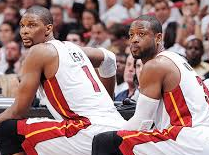 by midnight Monday whether they would opt-out of their contracts and become free agents -- as James did -- or opt-in to remain with Miami at full salary. They'll beat the clock. Wade revealed his opt-out plans on Saturday, with Bosh expected to soon follow. Udonis Haslem did, too. All were fully expected to follow James' lead and opt out, which is good news for the Heat. The Big 3 all opting-in would have broken the cap-space bank and not allowed Miami to add and re-tool. The Big 3 all opting-out allows Miami to negotiate lesser deals for each in order beef up the roster. Three opt-outs do not guarantee but strongly suggest the Big 3 will cooperate on the financial end and all return. A complication by Wade/Bosh would have been if one opted out but the other did not, but that was never expected.

FUTBLOG! WORLD CUP ROUND OF 16: LET THE KNOCKOUTS BEGIN!: FUTBLOG! is the official World Cup post of this blog, a continually updated daily dose of the month-long soccer spectacle in Brazil. See earlier posts for earlier group-play results. We're on to the round of 16 now, with two knockout games each day for four straight days, today through Tuesday. The eight knockout games start with host Brazil in action and end with the United States. What's not to like?

KNOCKOUT STAGE / ROUND OF 16: BRAZIL (BARELY), COLOMBIA ADVANCE: On the entire continent of South America, the total number of people not watching the World Cup today would not fill a Kia. Eight of the nine South American teams to advance are in play, with the biggest, hottest spotlight on host Brazil kicking off the Knockout Stage.

BRAZIL def. CHILE, 1-1 (3-2 PKs): A date with host and favorite Brazil was a most dubious bracket reward for Chile, but the underdogs played valiantly through overtime before falling in penalty kicks. Brazilian fans were not entirely thrilled with their guys' play in the qualifying stage and should not have been today, with relief the emotion here far more than elation. My pick was: Brazil, 3-1.

To follow: Sunday--Mexico vs. Netherlands; Costa Rica vs. Greece. Monday--France vs. Nigeria; Germany vs. Algeria. Tuesday--Argentina vs. Switzerland; United States vs. Belgium. 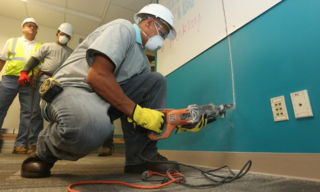 DOLPHINS STADIUM RENOVATIONS UNDERWAY: They began officially this morning, what the club is calling a "modernization" of the stadium. If you don't believe me, here's a photo the Dolphins provided. The multi-year construction project follows funding approval by Miami-Dade commissioners. The renovation will include a shade canopy, all new seats, new video boards and concourse and concession upgrades in a project expected to be completed by the start of the 2016 season.

CATS MAKE SAFE, SMART CHOICE WITH EKBLAD: Folks who know hockey more than I say 18-year-old defenseman Aaron Ekblad, 6-4 and 216 pounds, was the surest thing in last night's NHL Draft. Your Florida Panthers, with the No. 1 pick, were smart to take him. They could have traded down or taken a scorer, but it's hard to say this wasn't a 'need' pick when the Cats ranked next-to-last in goals allowed last season. Besides, Ekblad is a two-way defender who had 23 goals in Ontario last season. The newest Panther is pictured. Young female Cats fans (and maybe some of you guys, too), start your swooning.

Click back often for we update and add to our latest blogposts often...