1) It is THURSDAY, APRIL 3. Congratulations to Alonzo Mourning for being voted into the Basketball Hall of Fame. After Wade/LeBron, Zo might be the most popular Heat player of all-time. 2) Ryan Grover today was named Dolphins new head athletic trainer. He'd been an assistant the past 15 years with Steelers. 3) In The Previous Blogpost (ITPB): Marlins opens season with poll, Dolphins signing, Heat surge, Hochman, Neil Young & more. 4) Follow on Twitter @gregcote.

ON COMPENSATING COLLEGE FOOTBALL PLAYERS BEYOND THEIR SCHOLARSHIPS: The National Labor Relations Board ruling last week approving Northwestern players' right to vote to unionize for collective

bargaining and benefits could affect all private schools including the University of Miami. Former

Northwestern quarterback Kain Colter, a leader of the movement, was in Washington just yesterday lobbying politicians. The NLRB ruling says players are employees/workers, symbolically turning the phrase student-athlete backward. The ruling in time could force states to allow the same rights for public- university teams. Initially this is about medical benefits and workplace environment, but all logic suggests unionization in time would lead to full-fledged pay-for-play, a professionalization of college football. And if college football players are getting paid, you don't think men's basketball players and other athletes will want some 'o that? Pay-for-play could in turn cause a reduction in scholarships for non-revenue sports and higher mandatory student fees. in short the NLRB ruling is a nightmare for the NCAA and every college and university -- all of them opposed to it. I tackle this dense issue in today's latest column; click Draw The Line Here to read. I wrote why I'm oppoosed to the NLRB ruling and unionization, and part of it is that college football players already are well-compensated and well cared-for. A four-year full-ride scholarship to UM, for example, is worth close to $250,000. That's pretty fair compensation for playing a game and also getting the coaching and platform to enhance NFL chances. What is your view? Agree or disagree with my column. Agree or disagree with college football players deserving more? Take a dip in our poll and say why. 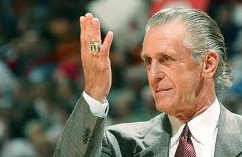 "You always fear. It's not a real fear. I always have concern when players are in the situation they're in. But we feel we have the best organization in the league for those players to stay, and to also attract others to want to come here. With our three guys, we hope that this turns into a generational team. And that it's not just we're at the end of this four-year run right now because players have some options this summer." On owner Micky Arison: "He really wanted to win and wanted to put on a great show and have a great product. Micky has always been one that tactically and with great thought, weighing all the pros and cons, has swung for the fences. And I have too." On himself: "You have to have a big-picture approach. That's what I do best; I try to see the big picture." On LeBron James: "LeBron, being who he is in this world, in this game, has a very heavy load. There's a heavy load off the court and on the court. It's a lot different than what it used to be. He manages everything he has to manage that maybe Magic Johnson didn't have to manage back in the 1980s. I've adapted to that." e life we're living today."

Poll result: Support for Marlins but anti-Loria feeling remains strong: We asked what best describes your feeling toward the Marlins and a majority called themselves either a big fan (37.2 percent) or casual fan (20.6%). But another 36.3% said they were not a fan because of owner Jeffrey Loria. The remainging 5.9% said they simply don't like baseball.