1) It is SATURDAY, APRIL 5. Heat really missed Dwyane Wade in last night's double-OT loss to Minnesota. Miami three-peats with a healthy Wade, doesn't without him. Period. 2) I was remiss in not remarking yesterday on the 46th anniversary of the assassination of Martin Luther King Jr., one of the most important people anywhere, any time. 3) In The Previous Blogpost (ITPB): Should-college-football-players-be-compensated with poll, Pat Riley talks Big 3 future & more. 4) Follow on Twitter @gregcote.

FINALLY THE FINAL FOUR: GATORS UPSET LOSERS, KENTUCKY IN: No. 1-seed Florida Gators were favored over No. 7 UConn in today's early game but lost 63-53, a surprise if not a stunner. No. 8 Kentucky edged No. 2 Wisconsin 74-73 in in the late game. Our original post on the Final Four from four angles:

Our analysis, predictions: Florida-Connecticut--Gators have won 30 straight since last losing Dec. 2 to UConn on a buzzer beater, and I like Florida here without much hesitation. UConn is a one-man show with Shabazz Napier, while the Gators are so balanced and deep, with Scottie Wilbekin's court command, Casey Prather's offense, Dorian Finney-Smith's rebinding, Will Yeguete's unsung dirty work, and of course man-among-boys Patric Young's power inside. Wisconsin-Kentucky: Fascinating contrast, with Wisconsin's veteran, unheralded bunch vs. Kentucky's young One-and-Done crew of highly recruited stars led by NBA-ready Julius Randle and villain-coach John Calipari. Team vs. Individuals. My picks: Handling the atmosphere, stage and crowd of 75,000 in a football stadium could be a huge factor tonight. That's partly why I like the two older, veteran teams. Make it Florida, 68-58, and Wisconsin, 70-67.

My bracket: Go Gators!: Florida is the only team I have alive in the FF, and I have the Gators winning it all, so my rooting interests are with Gainesville (sorry, Canes fans). I'm out of the running in my lone office pool but it'd be nice to at least say I got the champ right.

WHICH OF MARLINS' BIG 2 SHOULD TEAM PRIORITIZE KEEPING?: The premise of course is that the penurious Marlins won't spend to keep both pitcher Jose Fernandez and slugger Giancarlo Stanton long- 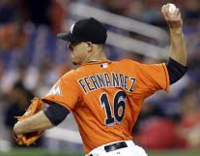 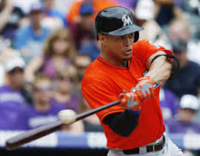 term. Each will command the kind of financial committment associated with Yankees or Dodgers spending, not with Jeffrey Loria. (I explore all of this in today's latest column; click Marlins Big 2 to read). The likeliest scenario is that Miami will prioritize locking up Fernandez and trading Stanton after this season, but is that wise? Which player would you keep if you thought the team had an equal chance to sign either and planned to keep only one? I know, I know. Why can't they keep both!? But we're trying to deal with reality here. So take a dip in our poll and say why.

THANK YOU, ALONZO MOURNING: Comes the news that former Heat star Alonzo Mourning is going into

the Basketball Hall of Fame, and it is deserved. We're talking about a great player and a better man. On the court he was an inspiring, scowling, biceps-flexing defensive monster. Off the court he encouraged many fighting and overcoming kidney disease, and he has been a community giant with his philanthropy and time-giving. A small snapshot I recall: A brawl in the 1998 Heat-Knicks playoff series found Knicks coach Jeff Van Gundy latched onto Mourning's lower leg "like a poodle on a redwood," I wrote in a column. Next day at practice, Mourning started laughing out loud at the reference, saying how much he'd enjoyed it. Thank you, Zo.

THANK YOU, DAVID LETTERMAN': David Letterman, for me the No. 2 late-night icon of all-time after

Johnny Carson, says he's retiring next year, and that's worth a quick homage here. Letterman is my kind of humor, absurdity meets wise-ass, and I loved him from the start. For years you were a Letterman guy or a Leno guy, and the choice was always a no-brainer for me. There was something about dropping watermelons and TV sets from a three-story building to watch them smash on the ground that appealed to me. I was just out of college when he came on in the early '80s and he's been a big part of the laugh-track of my life ever since. Thank you, Dave.

Click back often. Updates/adds coming to this latest blogpost...