1) It is SUNDAY, MARCH 30. Check out my latest Random Evidence Sunday notes-column package, leading with the Marlins. 2) In The Previous Blogpost (ITPB): Greatest Ralph poll, Heat fall to Pacers, the art of child-spoiling, topless protestors & more. 3) Follow on Twitter @gregcote.

An optimistic take on Marlins. No, seriously: In today's special Marlins preview section I write an upbeat column on the Marlins. I list 10 reasons to like this team and feel good about this season. Check it out. 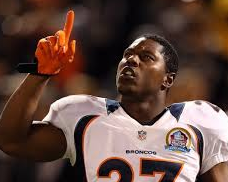 or useless stat breakdowns to know that. In Denver last year he rushed for 1,038 yards and 10 TDs and -- this is important -- caught 60 passes for 548 yards and three more TDs. Yes, much of that was thanks to Peyton Manning. Still, Moreno, used right, can be the dual-threat back the Dolphins had but underutilized in Reggie Bush. Moreno also is healthy, young, a very good pass-blocker and fumbled only one time in 241 carries last year. Lots of upside. He should complement Lamar Miller well, no matter who starts. The onus now is on Daniel Thomas to earn his roster spot and carries. The fact Moreno only signed a 1-year, $3 million contract could be smart for both sides. He isn't a financial burden for the Dolphins. At that price, he's low risk, high ceiling. Smart, smart. Moreno is pictured gesturing where he hopes to be on Miami's RB depth chart this season.

BRACKETS BACK! CINDERELL-O-METER (PATENT PENDING) AT 33.3% ENTERING ELITE 8 GAMES: Excluding the four even-seeded play-in games, there have now been 20 upsets (by seeding) in the 60 men's NCAA Tournament games through the Elite Eight round, or a Cinderell-O-Meter reading of 33.3 percent. We update the Cindy Meter throughout March Madness. Here are all 20 upsets thus far, ranked based on seed differential:

The Cindy Meter composite standings among teams still alive in the tournament are: Kentucky +17 and UConn +12.

Elite Eight round: And my bracket wants...: I had five of eight teams still alive on my bracket. Saturday: I needed Florida to beat Dayton (thanks, Gators), and Arizona to beat Wisconsin. Got one of two. Sunday: I needed Michigan State to beat UConn and Michigan to beat Kentucky -- and got neither.

Sweet 16 round. And my bracket wants...: I had nine of 16 teams still alive in my bracket entering the Sweet 16 games. Thursday night: I needed Wisconsin, Florida and Arizona to win, and all did. (I didn't have a dog in the Dayton-Stanford hunt). Friday night: I needed Michigan and Michigan State to win -- and both did. I did not get the wins I needed from Iowa State and Louisville.

WHY THE NLRB'S NORTHWESTERN DECISION IS WRONG-HEADED AND SHOULDN'T STAND: So a regional director of the National Labor Relations Board in Chicago rules that Northwestern football players may vote to unionize, and all hell breaks loose in college sports. The ruling affects only private universities (for 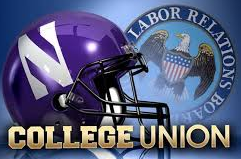 now), so the potential reaches to Coral Gables and UM. The Northwestern players bid for compensation benefits for injuries well into their post-school futures, plus bargaining rights for working conditions such as number of practices. The NLRB in effect has ruled that football players are primarily workers and employees, not students. Pay-for-play is not a part of this whole thing, although the ruling surely opens the door for that, too. There are problems with the ruling. Where do I begin? Players already have medical benefits; your ankle injury is well-treated. And is it really good for college sports to have players negotiating how much they'd like to practice? Mostly this ruling is wrong because it assumes players contribute substantially to a school's football revenue. (In Northwestern's case that was $235 million from 2003-12). That's a faulty premise. The ruling alludes to the "enormous commercial value" of players' work. That's wrong. Players come and go, and very few actually impact a university's success or brand. For every superstar exception like Johnny Manziel or Jameis Winston, there are a hundred relatively anonymous low- or no-impact players along for the ride. About 99 percent of all players have zero relevance on attendance and revenue at Any Given University. They are incidental. They are passengers. The backup guard who seldom plays and should be grateful for his scholarship is lumped in this ruling with the star quarterback -- either that or somebody has to decide relative value. The whole idea of most athletes' entitlement beyond their scholarship is faulty. The brand is Ohio State or Southern Cal or Florida, and fans will be there no matter who temporarily fills the uniform. This NLRB ruling is an unnecessary mess for college sports. I'd call it a landmark ruling if I weren't pretty sure it'll be overturned on appeal and disappear. (At least for now...).

HEAT NOT CONCEDING NO. 1 SEED: Last night's 84-83 Miami loss at Indiana gave the Pacers a 3-game lead for the Eastern Conference's top playoff seed, and 2 in the loss column. But the tiebreaker (conference record) goes to IND so Heat must finish with a better record, not tied. Still, it ain't over! Miami has 12 games left, and seven are at home including an April 11 rematch with the Pacers. Only five of 12 Heat games left are against teams with a winning record. Indiana has only four games left, of 10, and five against teams with a winning record. In sum, Miami if it wins the rematch here in two weeks will have a shot at wresting No. 1 and home-court advantage in what should be a deliciously brutal playoff series.

BUS DRIVER BEATS POET FOR GREATEST-RALPH HONORS: We asked you in the previous blogpost to name the Greatest Ralph of All-Time (you may still vote), and I'm thrilled to report a delightfully diverse two-way battle emerged from among 11 finalists, and that Ralph Kramden of The Honeymooners (32.7 percent) beat Ralph Waldo Emerson (20.3%). Ralph Lauren and Happy Days' Ralph Malph were dueling for a distant third. A fictional sitcom bus driver winning my poll over a legendary essayist/poet says much about my blog readership -- all of it good!