A-Rod poll: What do you believe? Vote now!; plus D.Wade's b-day yacht, radio, NFL Final Four's quiet Cinderella-ness, "Who are you wearing?" & more

1) It is TUESDAY, JANUARY 14. Heat visit the White House later today. Wonder if Obama will remark how he wishes he'd had as good a year as Miami? Photo is from last year's WH visit. 2) Click on Random Evidence for our latest Sunday notes-column package, leading with the merry lunacy of Le Batard's Ballotgate. 3) In The Previous Blogpost (ITPB): NFL Divisional Round playoffs, Super Bowl rooting-interest poll & more. 4) Follow us on Twitter @gregcote and also on Instagram, Vine and Facebook.

Click on Damage Is Done for today's latest column by me, on Alex Rodriguez's fight against baseball, a fight Quixotic but for its lack of nobility. The stain of steroids is not something A-Rod, or his sport, will ever be past.

TAKING SIDES IN THE ALEX RODRIGUEZ MESS: Sunday night's 60 Minutes interview with Anthony Bosch, the Biogenesis clinic founder, was damning to Alex Rodriguez as you knew it would be. If you beieve 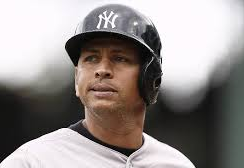 Bosch, who is cooperating with Major League Baseball's investigation, then chances are you have little or no doubt A-Rod used various performance enhancing drugs (PEDs) and that that his resulting 162-game suspension (reduced from 212 by an arbitrator) is justified. If your sympathies instead are pro A-Rod, then chances are you think Bosch is a lying snitch and that MLB is pursuing a vendetta against Rodriguez, who has denied the allegations and may sue to have his suspension overturned. Chances are, either Bosch or A-Rod is the liar here, without a lot of gray area in between. Maybe our poll question should simply have been "Who do you believe?," although I think the poll choices pretty much cut to that chase. Vote and say why.

D.WADE'S BIRTHDAY YACHT: One of the many ways Heat stars and celeb-athletes in general are

Ali poem; "Me? Wheee!" Don't get me wrong. I'm not just buying Publix ice-cream cakes over here. I have spent big for a party or two, such as the time I rented out an out an oceanfront hotel ballroom and complained about the cost for a year. But Heat players -- they do it up. Chris Bosh once touted his own birthday with live camels in a Sahara motif. Yesterday, Dwyane Wade topped

him with a three-story yacht custom-wrapped in his personal logo. Dwyane turns 32 this coming Friday but celebrated early. Pictured are the yacht, Wade and teammates, and in a photo pretty much epitomiziing The Good Life: Bosh in a tux, aboard a yacht, drawing on a fine cigar against the Miami skyline.

NFL FINAL FOUR: GLAMOUR QUARTET, BUT UNDERDOG QUALITY, TOO: Patriots at Broncos and 49ers at Seahawks bring a legit, heavyweight quality to the AFC and NFC Championship Games. The NFL and

TV networks undoubtedly are thrilled, and so should fans be. Ten Super Bowl championships are represented by the Final Four. Tom Brady vs. Peyton Manning (pictured left) is about as good as it gets for an individual duel, and San Fran-Seattle (right) probably is the league's fiercest team rivalry at the moment. Peel back a layer and see an underdog aspect here too, though. Seattle has never won a Super Bowl in its 38 seasons, and its only SB appearance (2005) saw 'Hawks fans bitterly feeling robbed by the officiating. The other three teams in the Final Four are pedigreed, but with a film of dust on their shine. The Patriots last won it all in 2004, the Broncos in 1998 and the 49ers in 1994. Their fans aren't starving like Dolfans are, no, but it's been awhile for each. That makes this a power Final Four but with an underlying shade of Cinderella. By the way, I went 3-1 overall on my Divisional Round picks (missed on Carolina), and 1-2-1 against the spread (had San Diego with points; Seattle game pushed).

Poll result: You want a Denver-Seattle Super Bowl, and a Broncos win: We aked in the last blogpost who you're rooting for of the final eight NFL playoff teams. Extracting the surviving Final Four it's Broncos 29.9 percent, Seahawks 19.0, Patriots 9.9 and 49ers 7.4. (The now-ousted teams were Panthers 21.7%, Chargers 6.5, Colts 3.2 and Saints 2.7).

"WHO ARE YOU WEARING!?": Golden Globes co-hosts Tina Fey and Amy Poehler had a funny line Sunday night, thanking "all the women and gay men who are watching." Awards show audiences I guess skew like that, at least by broad stereotype. They might have added, "...and married men whose wives control the 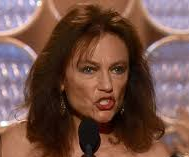 remote." That'd be me. My wife informed me last night we have entered "awards season." (I did not know there was such a thing, but have a feeling it's going to be a lonng season). The Globes combine film and television. The TV people are identifiable by their bad seats; some of the TV winners are still making their way to the stage. Highlight of the evening for me: an apparently drunk or stoned Jacqueline Bisset (pictured) floating onstage in a trance, in an appearance that answered the question whether she is still alive. (Answer: barely). The only household rule when I watch an awards show with my wife is I can't constantly make fun of the red-carpet preamble and "Who are you wearing?" -- maybe the most absurd question ever invented. So I vent in my blog instead. "Who are you wearing!?" In other words, give [Your Designer Here] a goose of free national advertising. "Who are you wearing!?" In other words, let's shamelessly promote the idea that beauty and high fashion are above all, even though the cost of it makes them beyond most. "Who are you wearing!?" I don't give a crap, because I'd just as soon see you in a T-shirt, jeans and no makeup. Bulletin: About one-third of the the dresses look halfway to hideous, and all tuxedos pretty much look alike.