1) It is THURSDAY, JANUARY 16. I'm back down in the Friday Page Dungeon today summoning this week's NFL playoff picks. Is that the Upset Bird I see? What is he smoking? 2) Mel Kiper Jr. in his first Mock Draft has Miami selecting Alabama OT Cyrus Kouandjio 19th overall. 3) In The Previous Blogpost (ITPB): The A-Rod mess with poll, D.Wade's birthday yacht, NFL Final Four, Golden Globes & more. 4) Follow us on Twitter @gregcote and also on Instagram, Vine and Facebook.

Lauren's got a gun...: In the news, Lauren Tannehill, hottie wife of Dolphins QB, leaves an AR-15 rifle in a rental car. (Not that there's anything wrong with that). Only readers of this blog know the backstory! We told you on Aug. 1, under the headline, 'Mr. & Mrs. Tannehill are locked and loaded,' that the couple occasionally shoots at a gun range. The Riflewoman is pictured.

Dolphins' new offensive coordinator. He'd been the Eagles' quarterbacks coach last season credited with developing Nick Foles, and has a pretty solid coaching tree, having worked under Dan Reeves, Joe Gibbs, Mike Holmgren and Chip Kelly. (If only Miami's search for a general manager were going as well). Lazor said he's "extremely excited." He was noncomittal on the offense he'll run or his staff plans, but did say he'd call plays. He said Miami has a "strong nucleus" in place toward a wnning team, and said he's excited to work with Ryan Tannehill, saying he has "a lot of ability." Lazor spoke highly of coach Joe Philbin, crediting him as why he accepted the job. Click on Lazor Focus for my column on the hiring. Meantime what are your initial thoughts? You'll note the poll has no option for "too soon to say"; that goes without saying. None of us knows if this is a great hire. We're just looking for a gut feel based on what you know or have heard of the new guy. Vote and say why.

Internet memes. Spawned in high-school hallways by bored teens whose life's goal is to do something that might go viral, #LeBroning is the act of intentionally flopping to the ground after barely being touched. Click HERE for a short compilation video. This may be the ultimate in James' career. Sure he's won MVP awards. Yeah he's won champioonships. But is there a greater honor -- a greater indication of worldwide celebrity -- than being mocked on the Internet? 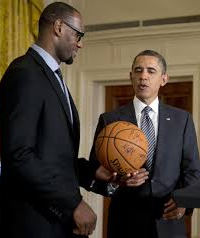 ON HEAT'S WHITE HOUSE VISIT: You may have heard by now that the Heat was honored at the White House on Tuesday for its 2013 NBA championship. Pictured at right: The most powerful man in the world, standing next to President Barack Obama. I watched the ceremony and wasn't even sure Obama was the most powerful president in the room. That was just before Pat Riley issued an executive order

authorizing missile strikes on Iranian nuclear plants. Pictured left: The sneakers Dwayne Wade wore to the White house, because nobody had the nerve to tell him not to.

POOR 'CLARK THE CUB': Chicago Cubs fans, last happy in 1908, are piling on against the club's new

Poll result: Little support for A-Rod: We asked in the last blogpost how you feel about Alex Rodriguez 's fight against baseball, and 71.7 percent said they did not believe A-Rod and supported his full-season suspension. Only 15.6% believed A-Rod and felt MLB was out to get him. Another 12.7% were undeciced.