It is FRIDAY, OCTOBER 25. We'll have a new blogpost later today, but since our most-beloved-Dolphin poll below has proved so popular we're leaving this post up top for a while longer. 2) Click here for my latest column, on the NCAA/UM verdict. Now let's move and forget all about renegade booster, um, what was his name again!? 3) In The Previous Blogpost (ITPB): NCAA/UM verdict and poll, Bryant McKinnie, NFL Pix 'n Fantasy, World Series odds, SOPY rankings & more. 4) Follow us on Twitter (gregcote), Instagram (Upsetbird), Vine (Greg Cote) and Facebook (Greg Cote).

London calling for Dolphins: NFL announced that Dolphins vs. Raiders would be one of three games played in London next season. It'll be Oakland's home game. Miami played in the first-ever regular-season game at Wembley Stadium, losing 13-10 to the Giants on Oct. 28, 2007.

WHO IS THE DOLPHINS MOST "BELOVED" PLAYER EVER?: Two points I'd make about the Sporting 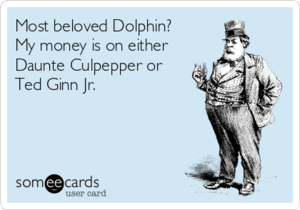 News. First, it used to be The Sporting News, even called itself 'TSN.' Then it quietly they dropped the The, just like The Miami Herald did, and is now simply Sporting News. Whatever. The larger point is that Sporting News just named the most "beloved" player for all 32 NFL franchises, and for Miami they chose Larry Csonka. (Click here for the gallery). "Hmm," I thought. My assumption would be that Dan Marino was the no-brainer pick, but maybe I'm wrong and they got it right. Debate or doubt, of course, form the petri dish in which our blog polls grow! Remember, this is not a greatest-player poll. Instead we invite your vote by however you define "most beloved." Make your choice and say why.

"LET'S GO RED SOX!" (NOT THAT I'M BIASED OR ANYTHING): Series now tied 1-1 heading to St. Louis. I'm nervous. ... Original post: I foresaw a Tigers-Dodgers World Series, so I'm delighted to be wrong as the Red Sox-Cardinals WS launches with Game 1 tonight at Fenway Park. Many loyal readers may know I was weaned on the 1967 Red Sox and the Year of Yaz. It's what turned a little kid into an avid sports fan, which in turn astonishingly somehow led to a career. It will be emotional for me tonight as Carl Yastrzemski throws out the first pitch. I predict a Red Sox championship, 4 games to 3, while fully admitting that's roughly 97 percent wishful thinking and 3 percent logic.

ODEN PROMISING IN HEAT DEBUT: Greg Oden played four minutes in Wednesday's Heat exhibition. But when it was your first game action since Dec. 5, 2009, that's a big deal, especially when your first touch resulted in a dunk. Miami will continue to baby Oden's progress, but this was encouraging. Michael Beasley's early effort has been encouraging, too. The Heat bench will be hugely better if these two perform as the club hopes. Early days, but the gamble on each seems smart right now.

Surprise! LeBron pick again for MVP: Bovada has it LeBron James at 3-2, then Kevin Durant 4-1 and Derrick Rose 11-2. For the scoring title it's Durant 7-5; for rebounds it's Dwight Howard even; for assists it's Chris Paul 3-2; and for rookie of the year it's Orlando's Victor Oladipo at 12-5, with notable others including Tim Hardaway Jr. at 12-1 and Shane Larkin at 20-1.

Poll result: NCAA's final verdict on UM was fair: A majority of 70.2 percent said the NCAA got it right Tuesday in docking the Canes with scholarship reductions but no additional postseason ban. Another 18.6% called the punishment too severe, while 11.2% said Miami got off easy.