1) It is THURSDAY, AUGUST 29. This week marks the 50th anniversary of the March on Washington at which Martin Luther King Jr. gave his "I Have A Dream" speech. Keep the dream alive! 2) Here's a hint of the breadth of my music tastes: Links to new songs from forthcoming albums by Eminem and Elton John. Click Berzerk for Em (warning, bad words) and Mexican Vacation for Elt. 3) In The Previous Blogpost (ITPB): The legacies of Howard Schnellenberger with poll, Dolphin roster cuts, Upset Bird Countdown & more. 4) Follow us on Twitter (gregcote), Instagram (Upsetbird) and Vine (Greg Cote).

INSIDE THE MIND OF NEVIN SHAPIRO: A LETTER FROM FEDERAL PRISON: I wrote a blog item earlier this week blasting the NCAA for the length of its continuing investigation of Miami in the Nevin Shapiro 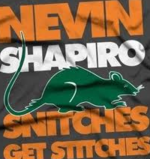 case, and Shapiro responded to me with a lengthy email from federal prison. I am sharing the email here because this is the central figure in the UM case, a former renegade booster now serving hard time on a Ponzi scheme conviction. Shapiro is pictured, along with a T-shirt reflecting how most Canes fans feel about him. I know some of you object (strongly) to my giving Shapiro this forum, but I simply offer a glimpse into his mind. Publishing what he says does not mean I endorse any of it. My reply speaks for how I feel. Whether you think what Shapiro writes here makes him seem delusional or anything else is for you to decide. The following is as close to verbatim as possible. I only edited/condensed slightly and softened profanity. Shapiro's letter has a background shade of gray. After that I offer brief thoughts of my own in a response that bears a background shade of light green.

SHAPIRO'S LETTER TO ME:

MY RESPONSE TO SHAPIRO:

I continue to believe the NCAA investigation of Miami has dragged on much too long, and that UM's significant self-imposed penalties thus far should greatly mitigate against further punishment being too severe. But I also think those volunteered penalties alone were obviously a pretty clear acknowledgment of years of lack of oversight, and of the truth of many of your allegations. Comparing yourself to Jose Canseco was apt. Even the dubious, unpopular messenger you don't want to believe can sometimes be telling the truth. On the other hand, the bitterness you harbor against former UM players and others for abandoning you in your time of need comes through clear in your letter, and that creates the sense you have an axe to grind, which in turn could leave some to think you are out to "get" the university. Your own damaged credibility and the NCAA's embarrassing internal issues in this probe are two other reasons -- along with Miami's self-imposed penalties -- why I think this two-sided mess needs to be put in the past with minimal additional sanctions. On a personal note, I admit some of the shots I have taken at you (especially in the Sunday notes column) have been harsh at times, and I have tried to be more professional in avoiding shots that seem personal. Bottom line? The Nevin Shapiros of the world would not exist if there were not willing athletes with their hands out, but you were the instigator who got Miami in trouble. You say you loved Canes football, and I don't doubt you did once. But you had a misguided way of showing it. You hurt the one you loved, badly. For that, no absolution awaits you.

Now, on to a couple of quick unrelated blog items:

Poll result: Canes title is Schnellenberger's top legacy: I asked Howard in an interview for this column what he is proudest of, and he mentioned three accomplishments. He didn't rank them but you sure did, with 89.7 percent calling his Miami years most impressive, 8.6% opting for his building FAU football from scratch, and 1.7% citing his turnaround of Louiville. You may still vote.

UPSET BIRD COUNTDOWN: 9 DAYS: The Upset Bird and I kick off our season of Friday NFL prediction

pages on Sept. 6, and we began a 10-day countdown that each day will honor outstanding notable birds. Today, at 9 days, we bring you Claudia Alta Taylor Johnson. Who? Lady Bird, of course! That's right, children. The United States of America once had a First Lady in the White House (1963-69) named Lady Bird. We have had eight First Ladies since, all bearing pedestrian names that bow to the great Lady Bird. No funkier moniker has ever graced a presidential spouse. ("Whoa! Hold on one darned second," says Mamie Eisenhower).

Click back. May be updating/adding to this latest blogpost...