1) It is TUESDAY, AUGUST 27. The Dan Le Batard Show remains on vacation this week, but I'm told today's "best of" show (3 p.m., 790 & 104.3 the Ticket) will include heavy doses of me. So you've been warned! 2) No Dolphins among 13 NFL player featured in new version of Carrie Underwood's "Waiting All Day For Sunday NIght," debuting Sept. 8. But ex-Cane Jimmy Graham is included. 3) In The Previous Blogpost (ITPB): Foot-dragging NCAA holds UM hostage, Miley Cyrus at the VMAs, George Zimmerman at the gun factory & more. 4) Follow us on Twitter (gregcote), on Instagram (Upsetbird) and on Vine (Greg Cote).

HOWARD SCHNELLENBERGER: THE MAN, THE LEGEND ... THE HERALD MISTAKE: I wrote a lengthy Howard Schnellenberger column I liked. The timing was perfect, with this week's season-opening UM-FAU game a 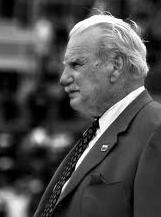 first-ever meeting of two football programs that count him as so hugely influential. Just one problem: The column that was supposed to jump to page 3D in the print (newspaper) edition on Tuesday did not jump anywhere in what I'm told were about half of all papers. That's embarrassing. The good news? The Herald re-published the column in Wednesday's editions. Meantime (thank you, Internet), click on AN ARCHITECT OF LEGACIES for the piece in its entirety. I asked Howard in yesterday's interview what accomplishment makes him proudest and he mentioned three, chronologically: Making the Hurricanes national champions, completely turning around the Louisville program in his hometown, and building FAU football from ground zero. Now here's a poll to set the order on Howard's own big three, which are listed here chronologically. (I think this poll might see a landslide winner, but you never know until you know). Vote and say why. I'm also curious if Canes fans upon reflection think less of Schnellenberger because of the "terrible decision" (his words, now) to abruptly leave UM after the '83 title.

DOLPHINS TRIM TO 75: Guard Lance Louis and fullback Jorvorskie Lane were the biggest cuts today as club trimmed roster to 75 to meet NFL deadline. Others among the nine men cut were WRs Julius Pruitt, Jeff Fuller and Andrell Smith; LBs Michael Clay, Nathan Williams and David Hinds; and DE Emeka Onyenekwu. All teams must trim to a final 53 by Saturday.

ON GUANDOLO'S HELMET-SLAP: Cypress Bay football coach Mark Guandolo is suspended two weeks (one game) by the county because ESPN cameras caught him slapping the helmet of his quarterback, Lucas Tellefsen. I get it, I guess. It's discipline for appearance's sake. It's also pretty comical. Such a violent sport. That kid-QB better be prepared for bone-jarring blindside sacks, but if his coach gets a tad physical -- OH NO! Funny to me.

UPSET BIRD COUNTDOWN: 10 DAYS: The Upset Bird and I kick off our season of Friday NFL prediction

pages on Sept. 6, and today we begin a 10-day countdown that each day will honor outstanding notable birds. We kick it off with Angry Birds, the video game franchise. [Never-before-told backstory: The Upset Bird, for reasons obvious, first thought the Angry Bird had usurped his name and considered legal action back in 2009 but was ultimately dissuaded by the Friday Page legal staff, which distracted and placated the Upset Bird with a plate of squirrel entrails].