White House to honor '72 Dolphins: OK so it's 40 years late. Quit nitpicking! The 1972 Perfect Season Dolphins are to be honored by President Obama at the White House next Tuesday, Aug. 20, that team's first such recognition. Coach Don Shula said he is "honored," adding, "It is a very special occasion and I know it’s something that all of us will enjoy and remember." (Aside to Mercury Morris: Resist the urge to pen a rap chiding Obama for not having a record nearly as good as your team's).

"RIGHT NOW" VS. NEXT YEAR: PREDICTING LEBRON'S MIAMI FUTURE: Two little words is all it took. "Right now." The full quote From LeBron James to ABC's Robin Roberts yesterday about his future with the Heat beyond this coming season: "I'm happy right now being in Miami. Hopefully, everything works 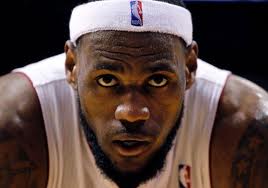 out." There is nothing wrong with that sentiment or the quote that conveyed it. It makes sense. The quote should not imply he might leave. But let's be honest: Down here, the entire 2013-14 NBA season will be played in the context of wondering what LeBron will do beyond it. And the search for clues and hints is on. He said "right now." Does that mean maybe not later? He said "hopefully." Does that suggest some doubt? The fun/agonizing part is that we really can't know "right now" what will happen next summer, because I doubt even LeBron knows. I could very easily see him re-upping with Miami, which will make an obvious priority of keeping him with all its money and might. But I also could see him going full circle with his Akron roots and returning to the Cleveland Cavaliers, or winding up elsewhere such as with the Lakers, perhaps. Everyone will want LeBron, and no doubt a handful of teams with the wherewithall will pursure him hard. So what will haoppen? With the caveat that nobody knows, let's speculate. It don't cost nuthin'! We have had a bunch of LeBron-related polls the past few years but none asking this specific question about his future. As always please remember: We are not asking what you hope happens, but rather what you honestly think is most likely to happen. Vote and say why.

Miami's Sebastian the Ibis and Florida's Albert Gator rank No. 1, No. 12 and No. 24, respectively, in a new Sports Illustrated list of top 25 college football mascots. Click HERE for the whole parade. One aside to SI: Classic mascots, by my definition, are costumed. I may be wrong. Osceola, Ibis and Albert are pictured. Another thing: Osceola has a horse, which seems like cheating, and Albert has a female sidekick, "Alberta," also cheating. So I declare the Ibis the winner.

STATE-SCHOOL GUYS PEGGED FOR 2014 NFL DRAFT: This we extract from Mel Kiper Jr.'s new list of top-five prospects at each position entering this college season. Including his top-fives and a "next up"

Poll result: College football defeats NFL: This was a surprise, at least to me, but we asked which season you most looked forward to, and you answered 60.8 percent for college football and 39.2% for the NFL. Not surprisingly, perhaps, the disparity was even greater in Florida, at 65.3% to 34.7%. Why not surprisingly? Hurricanes, Gators and Seminoles inspire more fan excitement in 2013 than Dolphins, Bucs and Jaguars.

Click back. It's certain I'll be updating/adding to this blogpost...