1) It is TUESDAY, JULY 9. Tuesday is Friday this week in terms of me and the radio. Not in my usual spot with Le Batard today on 790, but will be in-studio Friday instead. 2) Heat scrubs beat Brooklyn scrubs Monday to go to 1-1 in NBA summer-league, where results mean less than MLB spring-training games and NFL preseason openers, if that's possible. 3) Kevin Durant is marrying a WNBA player. I just placed a bet that their first child will lead somebody's league in scoring in 2035. 4) Saddest music headline of the week nominee: 'Surviving Doors to Reunite.' 5) In The Previous Blogpost (ITPB): Heat's-biggest-challenge polls post-Dwight Howard decision, shame of Urban Meyer, Jose Fernandez an All-Star, Andy Murray reigns & more.

Click on Good vs. Evil for today's latest column by me. It's on how sports has become a morality play, and how Jose Fernandez and Andy Murray spent the weekend striking a blow for the good guys. 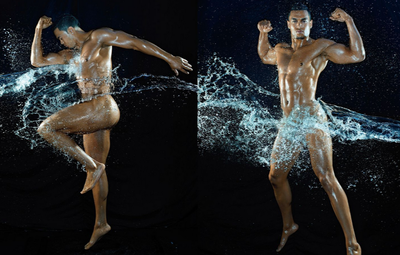 various athletes are photographed nude but artfully covered, is on newstands this Friday, and pictured right are two scenes from the mag in which Marlins slugger Giancarlo Stanton cavorts and flexes au naturel while being sprayed by a well-aimed hose. Click HERE for a 90-second video of Stanton's photo shoot. Below right is UFC fighter Meisha Tate. As a public service we are not showing 77-year-old golfer Gary Player in the buff. Niners QB 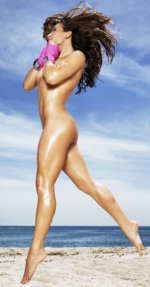 Colin Kaepernick and Mets pitcher Matt Harvey are among the most prominent athletes to be featured. (Kaepernick is pictured left holding a Dolphins cap he got in trouble for wearing to a Fourth of July party. Slow News Day redefined: This, as an issue). I doubt very much if Kaepernick, Stanton or Harvey would look as good as Meisha Tate wearing nothing but pink gloves and leaping on a beach, although Stanton gives it a shot.

A DOLPHIN CALLS OUT THE PATRIOTS! (WELL, SORT OF...): I doubt what

new linebacker Dannell Ellerbe said qualifies as Fightin' Words with the start of training camps looming, but these are summer's dog days in sports, so we do what we can. CBS Sports asked Ellerbe (pictured) if the AFC East-dominant Patriots at last are vulnerable: "I think they are," he replied. "I was brought here to hep knock them off. That doesn't mean we will, but we feel like we can." Take that, Tom Brady! Cower and quake!

BOSH TO INDIA: Heater Chris Bosh will be in Mumbai, India July 16-19 on an NBA goodwill and grow-the-game tour, the club and league announced today.

TWO CANES GET PRESEASON FOOTBALL HONOR: Hurricanes QB Stephen Morris and RB Duke Johnson are on the newly announced 75-man watch list for the 2013 Maxwell Award, given to the college football player of the year. The only other state players to make it are QBs Jeff Driskel of Florida and Blake Bortles of UCF.

Weidman, and, after watching Silva showboating and clowning, the result did not bother me in the least. I also would say "shhh" to Shaquille O'Neal for slamming Dwight Howard going to Houston by saying, "Not everyone can handle being under the bright lights." Shaq is still sore that Howard usurped his Superman nickname. Bulletin: You both stole it from the man pictured: Clark Kent.

Poll result: Pacers, Thunder are Miami's top obstacles: Sorry, Brooklyn. Adding Paul Pierce and Kevin Garnett wasn't enough. Too bad, Houston. Signing Dwight Howard didn't do it. We asked who in new NBA landscape is biggest challenge to Heat Three-Peat. From the East you said Pacers at 59.3 percent, Bulls 25.6%, Nets 12.0% and someone else 3.1%. In The Finals you said Thunder 50.3 percent, Clippers 17.7%, Rockets 15.2% and someone else (Spurs again?) 16.9%.

SEAHAWKS' CLASSLESS MOVE: Seattle Seahawks' annual charity softball game Sunday featured guest umpire Lance Easley. Name ring a bell? He's the infamous replacement referee whose end-zone mistake handed an undeserved win to Seattle at the expense of Green Bay in Week 3 last season. Now Easley was yukking it up and posing for pictures with Golden Tate. I doubt the Packers, or the NFL, were amused.