[1) It is THURSDAY, JANUARY 24. Unsurprisingly the Heat's Chris Bosh was named today to NBA Eastern all-star team as a reserve. 2) UM has hired Florida State offensive coordinator James Coley to that position with the Canes. A big hire. Bright young guy (well, 39) and also a top-notch recruiter. 3) I offer this link to my Ron Fraser tribute column -- Great Coach, Better Man -- because, based on the volume and content of my emails, it has touched readers. That is because of the subject, not the writer. 4) In The Previous Blogpost (ITPB): LeBron/Wade karaoke video, Jeff Ireland's plan, Ray Lewis vs. Bro Bowl, Obama/MLK. 5) Join us on Twitter @gregcote]

NCAA admits improper conduct in UM probe: NCAA president Mark Emmert called for a review of his enforcement program after acknowledging "improper conduct" related to the ongoing UM/Nevin Shapiro investigation. The NCAA said that "former enforcement staff members worked with Shapiro's criminal defense lawyer to improperly obtain information that would not otherwise have been accessible." Miami and Canes fans may presume that the NCAA will not -- and should not -- hold against UM any information improperly accessed. An official NCAA Notice of Allegations against UM is expected in February. Click on NCAA Probe of UM Now A Joke for my latest column.

UM STUNS/CRUSHES/ROUTS NO. 1 DUKE!: Greatest night in the history of Hurricanes basketball? I would not argue. Last night's 90-63 rout of Duke by the 25th-ranked Canes was UM's first-ever victory over a No. 1-ranked opponent. It also was Duke's worst defeat in 15 years. A more thorough spanking I have seldom seen. Such great, fierce defense. Such clutch offense by Durand Scott and the guys. Such relentlessness. Oh, and the unexpected return of Reggie Johnson. Fans storming the court as it ended; click What A Rush for the video of it. What a night for this program! Every season with a senior-dominated team has a now-or-never feel. Well, last night the Canes stood up and shouted: NOW! (Oh, by the way. The Heat won last night, too). Original post: Rock it up, Canes fans. Be the Gables Crazies. Turn this into a College Hoops joint for one night. This happens about once every, well, never, so shout it while you can: Heat and UM men play home games concurrently tonight, and the Canes game is 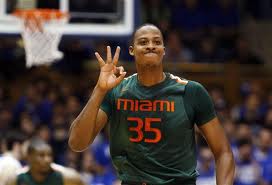 bigger. By a lot. Heat game has a lot to offer, too: The guys are back home after a five-game break and six-game road trip, they're playing Chris Bosh's ex's, Toronto, and we'll probably see the debut of the team's newly signed DR (designated rebounder) and tattoos leader, Chris "Birdman" Andersen. But! The 25th-ranked Canes top that with a packed gym tonight (itself a rarity) vs. No. 1 Duke. When ESPN and Dick Vitale are on

campus doing the game you know it's big, bay-bee! Coach Jim Larranaga's Canes will try to make school history tonight by being the first UM men's team ever to beat a No. 1-ranked opponent. Miami has beaten two No. 2s in its history: Duke, here, on Dec. 21, 1962, and at UConn on Feb. 20, 1999. Pictured: UM's Kenny Kadji, Duke coach Mike Krzyzewki, Vitale and Sebastian the Ibis. No matter tonight's result, Miami has Sweet 16 potential when center Reggie Johnson is back from injury. A loss tonight won't change that. But a win? It would be the biggest in the regular-season in UM history, and the ultimate statement by these Hurricanes.

FIASCO: LORIA RENEGED. SELIG RENEGED. WE LOSE: Miami and Marlins Park were supposed to get MLB's 2015 All-Star Game. It was an implied more than actual promise by baseball and commissioner Bud

Selig contingent on the new stadium being built. The thing is, the team and owner Jeffrey Loria got that park built with the implied more than actual promise that big payrolls and competitive teams would result. That lasted one failed season, followed by the standard fan-betraying, promise-betraying payroll-slash. Did Selig renege? Yes. Why? Because Loria reneged first. (Pictured: the Reneging Twins). I cannot blame baseball for refusing to reward Loria. Nor do I buy the notion that MLB should give Miami the ASG and its satellite events to "save" baseball in South Florida. A few days of festivities won't save baseball here. What will is an owner who takes advantage of the new ballpark by keeping his word, by spending and fielding strong teams.

SPORTS: THE GREAT, UNSCRIPTED DRAMA: I love sports because it writes itself, live, and the ending defies prediction. Sometimes it produces something couldn't-make-it-up bizarre, like the Manti Te'o girlfriend hoax. And sometimes it produces drama that might seem too hokey for a movie ending -- except it really happened, like yesterday at the Australian Open. The Stunna Down Unda: American Sloane Stephens, 19 (pictured), a Broward girl, upset her idol, Serena Williams, in the quarterfinals. When too-good-to-be-true is true. That's sports at its best.

Poll result: Lewis edges Harbaughs for biggest Super Bowl storyline: It was 52.3 percent for Ray Lewis' farewell and 42.4% for the coaching Bro Bowl when we asked in the previous blogpost what was the biggest SB storyline. The other 5.3% voted "something else."

GRATUITOUS CHEERLEADER ITEM GOES HERE: I would like to report that the Miami Dolphins 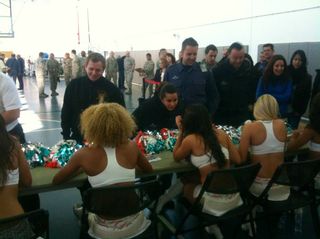 cheerleaders -- no rest for the buxom! -- are currently abroad on a goodwill tour of military bases. The women Tweeted out the photo shown. [Aside to photographer: Showing the backs of cheerleaders may not have been your smartest cinematic option. I'm just sayin']. The women are pictured at Moron Air Base in Spain. Please give the word "Moron" a proper little Spanish tongue-roll and get the emphasis on that second syllable please!