[It is WEDNESDAY, DECEMBER 19. Join us on Twitter @gregcote]

ON THE COWBOYS AND JOSH BRENT: This is tough. Made for some meaty palaver with Le Batard on the 790 airwaves yesterday. Josh Brent, of course, is the Dallas Cowboy charged with manslaughter-DUI in the death of his teammate and best friend Jerry Brown. The team has pledged to support Brent as he faces trial, and Brown's own mother -- in a magnanimous, noble display -- also called for the support of Brent, whom she has known for years. Well, Brent appeared on the Cowboys sideline i street clothes Sunday (pictured), was shown by TV cameras, and disappeared. Now the Cowboys and NFL say he will not be allowed back on the sideline. The debate: What's right? The courts will deal with Brent's penalty, and should. Meantime, I  feel he should be allowed on the sideline to feel the support of his team-family. The person who feels the most pain in all this, the victim's own mother, even thinks so. But many disagree. Pick a side. Vote and say why.

JETS HIT BOTTOM, ENTER RE-BOOT MODE: [Update: Sanchez has been benched] It isn't that a 14-10 road loss is that embarrassing by itself, not even to Tennessee. But when the loss happens the way it did to the 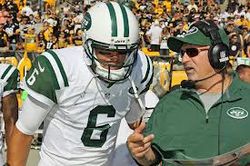 stumbling, bumbling New York Jets on Monday Night Football -- with four Mark Sanchez interceptions and a dooming late fumble -- it goes beyond embarrassment. Heads will roll. One of the guillotined heads will be wearing sunglasses because it will be that of offensive coordinator Tony Sparano, our old friend. That seems very clear. Sparano won't survive. Less certain but not by much, I'd say the Sanchez era also is done. He is contaminated with Jets fans now, likely beyond repair. He has become Matt Leinart, the pretty boy without the talent to match the star-aura. (A phrase came to mind Monday as I watched I-Wear-My-Sunglasses-At-Night Sparano counseling Sanchez on the sideline: "The Blind Leading The Blind.") Tim Tebow isn't the QB answer, either, of course. Not sure even Rex Ryan should feel real secure about his job. The Jets are in free-fall and could be close to starting-over mode. Right now the Dolphins are positioned second-best after New England in the AFC East today, ahead of the Jets and the Bills to a degree far more clear than it was entering this season.

predix: I won't be bragging this up on a billboard or anything, but I'm marginally OK with 10-6 straight-up and 8-7-1 against the spread. (Redskins game was off-the-board when  I picked it). Had a few nice hits like Vikings and Cowboys winning outright upsets, and Niners-with-points at Pats. But too many results blindsided me. Way to lay down like mangy dogs, Giants, Ravens, Lions and Chargers. You bums! Greg's Lobos: My fantasy team won 143-100 (small league), with Aaron Rodgers and Andre Johnson both topping 30 for me. But I'm still 5-10 overall and (way) out of my league's championship round.

Dolphins' playoff odds: Got a microscope?: The computer model over at makenflplayoffs.com puts the Dolphins' chances of winning the second wild-card spot at 0.02321 percent. (Do you believe in miracles?)

MARLINS, NOLASCO AND TRUMBO: No secret the Marlins probably will deal starting pitcher Ricky Nolasco. He's unhappy, wants out and is set to make $11.5 milliion in 2013. Now it is being reported the

Angels might want him and that Miami possibly could get outfielders Mark Trumbo (pictured) or Peter Bourjos in return, by possibly adding a prospect in addition to Nolasco. I'd do the deal for Trumbo in a heartbeat. He hit 32 homers last year and would give the club a power bat to augment Giancarlo Stanton. It would be a rare popular move by the Marlins, so, of course, don't hold your breath.

ON SABAN'S ATTEMPT TO DE-SATANIZE HIMSELF IN MIAMI: Alabama coach Nick Saban went on 790 The Ticket and extended an olive branch to Miami and to the Dolfans he lied to before leaving the team after the 2006 season. Saban admitted to "not handling the way I left well," calling it something 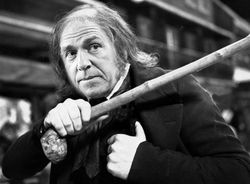 "I've never felt good about." He also made some minor news by saying the Dolphins offered a contract to Drew Brees first before the '06 season, not to Daunte Culpepper, but that Brees then "didn't pass the physical." I hesitate to rehash, but it bears wondering, again, how Brees could fail a Dolphins physical and then a week or so later pass a Saints physical -- his New Orleans career since a strong indication the Saints medics got it right. What I took from what Saban said, if true, is that Culpepper-over-Brees wasn't a misjudgement of coach or management, but a medical error. As for Saban's attempted rehabilitation of his image in Miami in advance of the Alabama-Notre Dame title game, well, it's so much more fun to hold you as a villain, Nick. Hence, you pictured here as Ebenezer Scrooge. You charmed us on the radio the way you charm-recruit kids and moms in living rooms. But some lies you just don't forget.

Click back. Will be updating/adding much to this latest blogpost...