Name biggest Miami sports story of 2012: Top vote-getter so far is what you'd expect, but there's a fierce three-way battle for second place. Voting continues in blogpost directly below this.

G16: DOLPHINS @ NEW ENGLAND: Final: Key mistakes hurt badly. A Tannehill pick. A Bush fumble. Two big Binns drops. But let's not kid ourselves. Miami didn't lose because of mistakes. Miami lost because it played a (clearly) better team. ..... 4Q: Would have like to have seen a late timeout to give Reggie Bush one last shot at 1,000 yards. Oh well. ... It's officially a rout/embarrassment at 28-0 as Brady hits Rob Gronkowski for 23-yard scoring pass. ... Armon "Goat" Binns with another big drop, this on 4th down. ..... 3Q: Review that went against MIA negating Clemons' fumble-recovery TD was the right call. Pass was incomplete. ... And a third big mistake plunders Miami, this one Reggie Bush's muffed handoff and fumble inside Pats' 10. Handoff looked a tad high, but one Bush should have corraled. ..... Half: I feel like two mistakes turned this half: Tannehill's pick when the game was scoreless. And Binn's dropped pass that could have pulled Miami within 14-7. ..... 2Q: Pats 21-0 on Ridley 2-yard TD run. ... Nate Kaeding hooks a 41-yard FG try wide left to end a series in which Armon Binns dropped what should have been a TD pass inside the 5-yardline. Binns = Goat! ... NE up 14-0 with Stevan Ridley's 1-yard run on 4th down. Pats pound Miami for a 92-yard scoring drive. ..... 1Q: A taut first quarter busts open as Ryan Tannehill suffers first interception in five games, and a few plasy later Tom Brady hits Wes Welker for 9-yard scoring pass and 7-0 Pats lead. .... Pregame: No playoff stakes for Miami, but the chance to finish at .500 with a 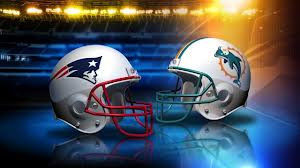 nice road victory over your division's kingpin gives the Dolphins much to play for. Then again a loss would have its pragmatic value by bumping Miami's draft-selection order up a few spots. Ten NFL teams have between 6 and 8 wins, so results today could shuffle the middle of the round pretty noticably. Today's Dolphins performance also could shape personnel decisions related to key free agents such as Reggie Bush and Jake Long, and solidify the mapping of plans for the offseason and the draft. To the game itself, Miami played the Pats tough in the first meeting (a 23-16 loss) and should again, although expected frigid and perhaps snowy conditions favor New England distinctly. So does the home team still seeking a first-

round playoff bye and therefore needing the win. The weather and the Pats' takeaway-inclined defense will severely test Ryan Tannehill's ability to extend his four-game interception-less streak. Pictured left: One more look at Miami's supposed-but-not-official new logo showing a sleeker, stylized dolphin sans helmet. Sadly, it reminds that no matter what you do, it's just tough to make a leaping dolphin look menacing. My pick: Patriots, 27-20.

Radio, then blog: We'll be yakking Dolphins on the 790 The Ticket pregame show today starting at 1 p.m., then be right back here with our Live Boutique Blog at kickoff. Your participation in both is invited.