[1) It is SUNDAY, DECEMBER 23. You may still vote in our what-most-defines-Miami-sports poll in blogpost directly below this one. 2) Join us on Twitter @gregcote]

Dolfan Satisfaction Meter: Voting now underway: The latest DSM appears in a separate blogpost directly above this one.

Click on Frustration And Comfort for my latest column, off yesterday's Dolphins game.

G15: BUFFALO @ DOLPHINS: Final: Three takeaways by Reshad Jones and three TDs by Reggie Bush carry Miami, but win by Benagls at Pittsburgh eliminated Dolphins -- officially -- from playoff contention. ..... 4Q: Reshad Jones interception on Buffs' 1st and goal from Miami 1 seals the victory. ... Buffs driving at 2-minute warning. ... Bills' FB Dorin Dickerson removed from field on cart with apparent ankle or leg injury. ... Buffs within 24-10 on 2-yard Ryan Fitzpatrick pass to Brad Smith. ... Dolphins fake a long field goal try and pooch a punt. ..... 3Q: Steelers tie Bengals, 10-10. ... Takeaway sets up 45-yard Kaeding FG and 24-3 lead, same score as last week's final vs. Jags. ... Cam Wake sack jars ball loose, Reshad Jones with his second fumble recovery and Miami's third defensive takeaway. ... Bush's 3rd TD of game is an over-shoulder catch in end zone of a perfect 12-yard Tannehill throw that beat double coverage. ... Another missed pass by Marlon "Dropsy" Moore. ... CB Sean Smith knee injury for Miami, return questionable. ... Dolphins catch a break with ruling of incomplete forward pass by Tannehill; might have been judged a fumble. Buffalo loses appeal. ... Lamar Miller 28-yard run. The ex-Cane looking good ... Chris Clemons recovers fumble for Miami; Dolphins now plus-2 in turnovers. ..... Half: Clean half for Dolphins, with zero turnovers and zero penalties. Solid defense other than giving up that one 62-yard run. Just enough offense. If only the Dolphins could play Jacksonville and Buffalo every week. (Cincy leads at half, 10-7) ..... 2Q: Miami up 14-3 on Bush 1-yard TD run. Tannehill's 30-yard pass to Rishard Matthews in that drive was a beauty. So was Tannehill's crowd-pleasing 31-yard run to the 2. ... Wait. Steelers now within 10-7. Hope lives! ... Cincy now winning 10-0 at Pittsburghas Dolphins playoff hopes ebb. ... I've been remiss in not mentioning that rookie tight end Michael Egnew is active and playing for the first time all season. ... Spiller's long run sets up 42-yard Bills FG for 7-3 score. ... Wow. Buffalo should-a challenged that no-TD call. ... Steelers just missed a 24-yard FG for Pittsburgh, no favor to Miami. ... C.J. Spiller busts a 62-yard run to the Miami 23. ..... 1Q: Bengals up 7-0 at Pittsburgh; pick-6 against Big Ben. Uh oh. ... Miami 7-0 on Bush 17-yard pass from Ryan Tannehill finished by a stretching dive by Bush. Call upheld on review. ... Reggie Bush limps off field after 9-yard run but soon re-enters game. ... Buffs' first series ends in Reshad Jones fumble recovery and 23-yard return -- only MIA's second defensive takeaway in past eight games. ... Miami first series ends in new PK Nate Kaeding's blocked 46-yard FG. Marlon "Dropsy" Moore with a big miss on a catchable ball. ... At the stadium, but with an eye on Pittsburgh. A Miami win and a loss by Cincinnati at Pitt keeps playoff hope alive. ..... Pregame: It is Fan Appreciation Day at the stadium. The stadium will be about one-third empty when it is done filling in. The Dolphins wish there were more fans to appreciate. ... I don't mean to make a sexist comment (meaning a sexist comment is coming), but cheerleaders in Santa outfits was a good invention by somebody. ..... Original post: This would be a high-stakes matchup, if this were the 1990s, alas. Bills and Dolphins were a huge rivalry then, meeting four times in the playoffs that decade. Now? Well, this is the 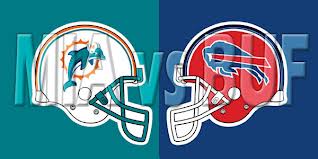 12th straight year out of the playoffs for the 5-9 Buffs. And it'll be the 10th playoff-less year of the past 11 for 6-8 Miami barring a miracle. Dolphins must win today and hope Cincinnati loses to keep hope alive into next week, when the odds would get really long. Meantime, games like this one (and last week vs. Jacksonville) have their usefulness. On the road to Good, teams like the Dolphins must prove

they can take care of business against lesser squads like the Jags and Bills. Today offers itself as a statement that Miami is clearly better than the Bills (not to mention and Jets) in the AFC East heirarchy. That's not nothing. Miami needs to win this home finale mostly because Buffalo's defense is really bad, and a loss would be a step back. With the receiving corps depleted, this could be a big day for Reggie Bush, and also maybe his farewell to Dolfans if the team doesn't re-sign him. By the way, in the board game pictured, notice that both teams have 12 men on the field. Fitting? My pick: Dolphins, 24-17.

Radio, then blog: We'll be talking Dolphins nonstop today on the 790 The Ticket pregame show starting at 10 a.m., then be right back here at kickoff for our Live Boutique Blog. You are invited to partake of both.