On Jeff Ireland: Vote now; plus Beinfest out?, state of our Big 4 teams, Chad Johnson, Dolphin WR prospects, Ozzie on the (other) f-word & more

[1) It is FRIDAY, SEPTEMBER 21. Thanks to the Dan Le Batard show on 790 The Ticket for having us on in-studio. Fun. More to come? Stay tuned. 2) Visit our video channel at YouTube/TheGregCote and join us on Twitter @gregcote. Promise to resume the videos soon.

STATE OF THE FRANCHISE: DOLPHINS, HEAT, MARLINS, PANTHERS: In this latest column by me, online now and shipping to today's/Wednesday's pulp editions, I offer a state-of-the-franchise report for our four major professional teams, grading and ranking them 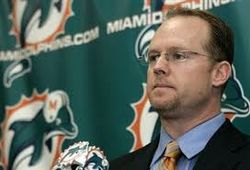 top to bottom. We consider management, success, prognosis, everything. I thought about adding a complementary poll here but decided it would be pointless because, logically, the Heat would dominate as our best-run pro team. Instead I offer a poll on South Florida's biggest sports lightning rod, Dolphins general manager Jeff Ireland, who was in the news again this week when a Dolfan confronted him, said he should "fire himself," and Ireland in turn called his critic an "asshole," later expressing regrets. There is a perception Ireland is extremely unpopular with fans. Leave it to me to find out. Vote in our poll and say why.

Poll result: Mixed, lukewarm support for Ozzie Guillen: In our previous blog poll we asked if you wanted Ozzie Guillen back as Marlins manager (you can still vote), and 49.1 percent said yes, 45.1% said no and 5.8% were unsure. Interesting. Results about as polarizing as the outspoken Guillen tends to be.

REPORT: LARRY BEINFEST TO BE REPLACED: USA Today is reporting the Marlins plan to replace president of baseball operations Larry Beinfest with assistant Dan Jennings. Beinfest has been GM or president since 2002. The move would not be a surprise. The same report indicated manager Ozzie Guillen likely would be back. No surprise there, either. Owner Jeffrey Loria tonight called the Beinfest report a "ridiculous" rumor. Which is not the same as simply denying it.

CHAD JOHNSON SPEAKS!: The former Dolphins receiver spoke last night on the 9 p.m. premiere of Showtime's Inside the NFL, and we brought you excerpts first. Highlights: 1) Johnson says, "The consequences to that altercation with my wife was me being released" -- even though coach Joe Philbin did not tell him that directly. "That was the reason. There is no need to blow smoke up my ass." 2) Johnson reveals he is taking anger-management classes, says, "Chad has to work on Chad." 3) He says he will work to win back the wife who divorced him.

DOLPHINS DRAFT PROSPECTS AT WR: Be surprised if wide receiver wasn't the Dolphins thinking right now for a No.1 draft pick in 2013. With that in mind, I note the three WRs listed on Mel Kiper's new top-25 "Big Board" are spaced apart enough that Miami, no matter how it finishes, likely would have a shot at one of them. The names to remember: Tennessee's Justin Hunter (pegged 7th overall), Cal's Keenan Allen (17th) and USC's Robert Woods (25th).

STANLEY C. PANTHER OUT OF WORK: I half expect to see Panthers mascot Stanley C. Panther on a

west Broward intersection holding a cardboard sign reading, 'Will Caper For Food.' Panthers have temporarily laid off their team mascot related to the NHL lockout threatening the season. Is there anything sadder than an out-of-work mascot? I'd imagine Stanley C. Panther must now be included as one of Mitt Romney's non-tax-paying 47 percent. I'm just saying.

ON STEVE SABOL: The NFL Films leader passed away today at age 69. NFL Films' dramatic, intimate packaging and presenting of the NFL was a big part of the league's emergence as America's favorite sport. It also was precursor to all-access shows such as HBO's Hard Knocks and Showtime's The Franchise. R.I.P. to an important figure in the history of sports and television.

ON YUNEL ESCOBAR: The Blue Jays shortstop is suspended three games for wearing an eye-black message written in Spanish (pictured) that used an anti-gay slur. He said it was meant as a 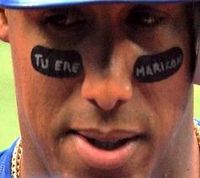 joke and "not meant to be offensive." Some suggest it's a cultural thing, that in the machismo of many Hispanics homophobic language is more accepted. I think that sounds like an insult to the majority of Hispanics who know bigotry is wrong in any language. What gets me about stuff like this is not just that Escobar might feel this way. It's that he (evidently) thought wearing an anti-gay slur on his face in a televised game would not, um, be noticed? Leaves us to wonder which is worse: Prejudice. Or outright obliviousness.

Ozzie weighs in on use of gay slur: Marlins manager Ozzie Guillen admits he is comfortable using the anti-gay slur "faggot," the word that got Escobar (see above) in trouble. Guillen once was disciplined for calling a Chicago columnist that. Yesterday he explained it as a cultural thing, saying, "In my house we call [each other] that word every 20 seconds. I've got three kids. For us it's like, 'What's up, bro?'" Ozzie lives his life unfiltered, which is fine. But Marlins ownership/management, in reviewing this season and deciding Guillen's future, must judge not just his managerial skills, but how he represents the team in the community. See Steve Rothaus' excellent Herald blog, Gay South Florida, for more on this.