MY NEWEST VIDEO: ENOUGH WITH THE PAST! ON DOLPHINS' OBSESSION WITH WHAT WAS: Click on YouTube/TheGregCote for my video channel featuring my newest mini-commentary related to the Dolphins' past and present.

On the Dolphins' Perfect Season anniversary celebration: It's the 40th anniversary year of 1972's Perfect Season, the Dolphins yesterday announced celebration plans, and I write about it in this column today. Don't get me wrong; 17-0 is worth appreciating all over again. But the franchise walks a fine line. Worshipping its distant past only underlines and magnifies how little there has been to cheer in recent years. My latest video (see above) also is on this topic.

THE PROOF: DOLPHINS A HARD CHALLENGE FOR HBO'S HARD KNOCKS: How do you make a mediocre and comparatively dull NFL team seem interesting? Well, you don't, apparently, as we were reminded 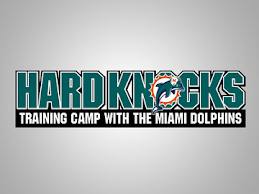 watching the one-hour debut of HBO's training-camp reality series Hard Knocks, this year featuring the Dolphins. HBO did its best to manufacture excitement. My favorite attempt was the segue straight from the sexy sizzle of South Beach to the team's training-camp hotel, done in a way that implied the Dolphins train in South Beach, not 30 miles north in a horsey Broward burg called Davie, where the center of town is (seriously) a rodeo. Another noble attempt was the gratuitous several-seconds snippet of Dolphins cheerleaders practicing, apropos of nothing. We saw David Garrard water-skiing, Ryan Tannehill's odd-looking dachsund, Mike Pouncey getting a haircut and Kevin Burnett at home with his kids. We heard owner Stephen Ross say, "I think we have a great team here" -- great evidently being open to wide interpretation. There were a couple of interesting behind-the-scenes nuggets. One was tight ends coach Dan Campbell, in a coaches meeting, calling Les Brown's blocking "a complete liability." Another was receiver Chad Johnson's boastful, profane press conference followed by coach Joe Philbin pulling Johnson aside to tell him to self-edit the language, please. The overriding problem for HBO is the lack of starpower on a team whose best player is the left tackle. Johnson and Reggie Bush wiggle the national Q-Rating needle a little, but not a lot. It doesn't help HBO that Tannehill is No. 3 on the depth chart, making it a tough-sell to package him right now as the savior. Also doesn't help that the new head coach is the visual and personality opposite of, say, Rex Ryan, in terms of scene-stealing, show-carrying command. As HBO gets more and more desperate in subsequent episodes, I'd imagine we should expect to see more scenes of South Beach, cheerleaders and Tannehill's hot blond wife, and perhaps file film of Bush on the arm of his ex-, Kim Kardashian. It would make for better TV than the stuff on the football field, alas.

Dolphins facility nobody refers to gets name nobody will use: A hospital has bought corporate naming rights to the Dolphins' Davie training facility and practice site that includes the indoor field nicknamed "the Bubble." In keeping with a personal policy I'll not use the corporate name, aloud or in print. Well, maybe if the Bubble was sponsored by Bubblicious, but otherwise, no. Personally I find it odd that a football team obsessed with avoiding injuries would now be sponsored by a hospital. Seems jinx-y.

VOTE: SHOULD BONDS, CLEMENS BE IN COOPERSTOWN?: I am bestowing to you, right now, a baseball Hall of Fame vote. Players eligible beginning in 2013 will include Barry Bonds and Roger Clemens, both unquestionably with first-ballot career statistics, but both strongly tainted by steroids scandal putting their election in serious doubt. Bonds this week told MLB.com he should be in Cooperstown "without a doubt." Now you tell him if he's right.

ON THE OLYMPICS COLUMN BY ME: I wrote in this column the reasons why, for me, the U.S. women's soccer team is closer to the Olympic ideal and the ideal Olympics than LeBron James' Team USA in basketball. Unexpectedly, the column inspired this needling text-message exchange between friend and colleague Dan Le Batard and myself late last night after Dan read the column online: Le Batard to me, 11:32 p.m.: Herald headline -- Cote loves white women playing sports. Hates black men. My response to Dan, 12:30 a.m.: Herald headline -- Le Batard looks at rainbow, sees black and white. (For the record, black/white and male/female never occured to me while writing what I wrote. Maybe it should have? But it didn't).

Time running out for Cote, the Official National Team of This Blog. Let's go d'Ivoires! Dammit!

THREE REASONS TO STILL WATCH THE SAD MARLINS: 1. Jose Reyes' hitting streak. It was 26 games until ending today, as he looks more and more like the player Miami thought it was getting. 2. Giancarlo Stanton is back in the lineup, his at-bats the most exciting minutes in the game, as two homers last night attested. 3. To see if the Marlins can still reach .500, at least. They'd need to finish 30-20 from here. (We can dream, can we not?)