[1) You can still vote in our grade-the-Hurricanes-recruiting-class poll in post directly below this latest entry. Results so far are clear. We agree. All things considered, Al Golden did great. 2) Join me on Twitter @gregcote]

SPOILER ALERT! PATRIOTS 31, GIANTS 27: Sorry to have spoiled the surprise for you by telling you who'll

win Sunday's Super Bowl and by what score. Unless you're a bettor, in which case, you're welcome. A difficult game to pick, but the bottom line is that Tom Brady and his team are just a little better than Eli Manning and his. One caveat: Brady really, really needs Rob Gronkowski and his magic ankle to play and be at least close to full strength in order to take advantage of the Giants not defending tight ends particularly well. (Remember Vernon Davis in the NFC title game?) Click on Super Bowl Gem for my full prediction. I also offer a column today putting the Dolphins in the context of these two Super teams. Click on Close, And Yet Not for that column. The headline on the column -- 'Dolphins perhaps not that far from being Super' -- is much too rosy, misleadingly so. (I don't write the headlines for what I write, except in this blog). The column begins from a glass-half-full vantage, noting that Miami was very competitive in three games this season against the Pats and Giants, though losing all three. Then the column gets to the reality of all that separates the Dolphins from Super-status. That's mostly a comparative lack of talent, of playmakers. And most of that is that these teams have Brady and Manning, and our team is still trying to figure out what to do for a quarterback. 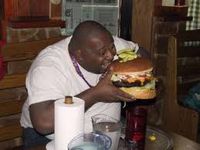 SUPER BLOG SATURDAY: WATCH AT YOUR OWN RISK!: A 2011 study by Clinical Cardiology indicates that watching the Super Bowl can trigger a heart attack. An Iowa State University study found that watching Super Bowl commercials can increase aggressiveness in children. A Cornell study found (surprise!) that Super Bowl parties promote over-eating and over-drinking. For instance the man pictured was a svelte 160 pounds before he started attending Super Bowl parties. Click here for a brief compendium of the above. Too many studies, I'd say. For example, a Greg Cote study found most people hope the tape-recording skips as Madonna is lip-synching Sunday. Three other quick thoughts for Super Blog Saturday: 1) Rapping Retirees Back Giants, Yo. Yes, it is as weird as you'd imagine. 2) Tim Tebow wins presidential poll. Could I say it if it weren't true? 3) Ever wonder what the Obamas do for the Super Bowl? Yeah me neither. But those who do should click here. One word. Strippers. Naw I'm just kiddin'! 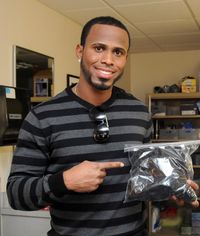 had his jangly dreadlocks sheared live on MLB Network last evening to adhere to the club's neatnik policy on personal grooming. Reyes is pictured before at left and after at right, holding a bag of his departed hair which I believe will be sold for charity. Me: "Hey what's your most prized possession?" You: "Um, lemme think. I'd say probably a Jose Reyes dreadlock." 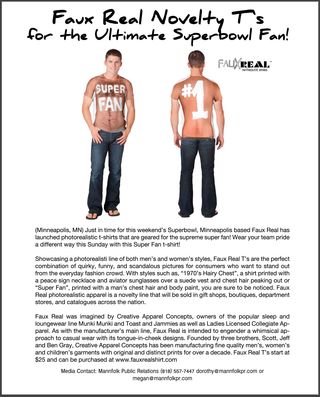 in Indianapolis, including metal detectors and pat-downs at all entrances. I don't wanna say Giants coach Tom Coughlin isn't real bright, but when he heard items prohibited inside the stadium would include bombs, he said, "OK, so we go with a shorter passing game." Two other quick thoughts for a Super Blog Friday: 1) Hut one, hut two, Madonna! SB halftime performer Madonna has released the video for her new single, "Give Me All Your Luvin," which you'll hear Sunday. The vid features Nicki Minaj, M.I.A. and a corny football theme. Click here to listen and see. The song is sugary-catchy, but is it better than the similarly titled classic by ZZ Top? Um, not on your life. 2) A T-shirt company is selling what is pictured: A shirt that appears to make you look not only shirtless, but shirtless and dorky enough to walk around with "Super Fan" painted on your chest and "#1!" on your back.

and Dwyane Wade as Eastern Conference all-star starters for the Feb. 26 game in Orlando (along with Magic's Dwight Howard, Bulls' Derrick Rose and Knicks' Carmelo Anthony). LeBron is a no-brainer. He has MVP numbers with a 29.7 scoring average, 8.3 rebounds, 7.0 assists and 55.3 percent shooting. LBJ is having his best season, which is a little like saying Gershwin is writing his best song. Wade, though, has missed nine of 22 games injured and is averaging a below average (for him) 20.3 points. Still, I don't argue his selection. It doesn't bring me up onto a soapbox to rail against fans picking the starters. Even with his games missed, Wade is more an all-star than anybody not starting because of him. Deron Williams? Brandon Jennings? Please. One more thing: Chris Bosh absolutely had better make the team as a reserve. The giraffe-like dude is having a terrific season.

THE NEW YORKER: I love The New Yorker for its classic cartoons as much as anything. Apropos of nothing, here is one I enjoy.

MOCK DRAFT HAS DE/OLB TO MIAMI: Newest mock draft from ESPN's Todd McShay has Dolphins at No. 8 selecting South Carolina DE-OLB Melvin Ingram. So there.

ANGELO DUNDEE IN ONE OF HIS FINAL INTERVIEWS: Click here to enjoy a YouTube video of the great boxing trainer in one of his final interviews before passing away this week at age 90. It will be 10 minutes well spent. Dundee's energy and enthusiasm shone through right 'til the end, as did his kindness and, well, appreciation. A remarkable man. A remarkable life.

Click back. Will be updating and adding to this latest blogpost. Seriously...