Was FIU bowl loss a farewell for Mario Cristobal? (Maybe not...); plus DeQuan Jones, LeBron and D-Wade, Kim Jong-il & more

[Join us on Twitter @gregcote. Four out of five doctors recommend it. The other one is drunk and being sued for malpractuce].

HOW LONG CAN FIU HOLD ONTO MARIO CRISTOBAL?: Three things I found notable about this week's FIU-Marshall football bowl game in St. Petersburg -- won by Marshall, 20-10 -- in inverse order: 3) "Thundering Herd" might be the 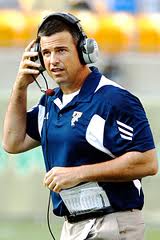 greatest nickname in college sports. I am most intrigued by the vagueness of it. Thundering herd of what? Bison? Stegosaurus? Wildebeests? It's like if you had the nickname Screeching Flock. The imagination soars. The Marshall logo appears to picture a buffalo but leaves ajar the door to interpretation. 2) Congrats to FIU for a second straight bowl appearance, and yet I cannot quite take seriously something called the "Beef O'Brady's Bowl." Sorry. Since the Poulin Weedeater Bowl has lapsed into history, the Beef O'Brady's Bowl might be the silliest-named bowl most embarrassed by an unfortunate corporate sponsor. Possible challengers: Meineke Car Care, GoDaddy.com, Taxslayer.Com and the inside rail to Famous Idaho Potato. 1) Will this be coach Mario Cristobal's final game at FIU? Reports and rumors swirl. Cristobal had a glorified "no comment" this week. I look at that neutrally, just as I would if he'd chosen the perfunctory "I'm happy at FIU" non-answer. I don't think Cristobal is disloyal. I do think he is upwardly mobile, and would have seen Pitt a clear promotion from the Sun Belt conference. May we be honest here? Playing in a bowl game out of the Sun Belt is like being class valedictorian of a plywood high-school in rural Mississippi. That Cristobal might consider a bigger pond would be no shock. The Pittsburgh Post-Gazette -- which happens to cover Pitt (and the Steelers) better than anybody -- reported he was the school's leading candidate. Now, to FIU's relief, it appears Pitt will hire Wisconsin assistant Paul Chryst. Will FIU be able to keep Cristobal. It appears so. For now.

LEBRON, D-WADE AMONG BETTING FAVES FOR SCORING TITLE: Bovada.lv has Kevin Durant even money at 1-1 to win the NBA scoring title, but right after that come the Heat's LeBron James at 11-4 and Dwyane Wade at 8-1. Dwight Howard and Kevin Love are tied as rebound-title picks at 3-2 with no Heatniks on the radar. Deron Williams is the assist-leader choice at 3-1, with James tied for sixth at 12-1. Heat are prohibitive 10-11 team favorites to win the Eastern Conference, followed by Bulls 3-1, Knicks 7-1, Celtics 8-1 and Magic 12-1.

senior basketball player DeQuan Jones, who had been suspended after being implicated in the Nevin Shapiro scandal. Not coincidentally, the action came just days after Jones had engaged an attorney to push the matter. Canes fans exalting over this as a torpedo to the original Yahoo investigation might want to dial it back a notch. This implies but does not prove that Jones was wrongly included in the report. Could just be that UM was more worried about the likelihood of a lawsuit than the possibility of repercussions for playing Jones. Anyway, around 5:30 this evening, a maybe/somewhat/temporarily/perhaps vindicated Jones Tweeted: "R.I.P. to the competition." Good for him. Presumption of innocence, remember. It may be spring before the NCAA reveals its findings and metes out punishment. Seemed unfair for Jones' senior season to be swallowed whole absent proof beyond an allegation.

ME, NFL PICKS: Upsetfest made for a tough week. Went 9-7 straight-up and 6-7-3 against the spread (with one push and two games off the board). Worst pick of the week? A tie between my thinking Bills would beat Miami and Jets-over-Eagles. Must have been the spiked egg nog. Detauils on this Friday's NFL predix page.

ME, FANTASY: Greg's Lobos at  4-10 missed my fantasy league's main playoffs then lost 128-110 in a consolation-round game. My season's epitaph: "He Had Aaron Rodgers And Still Couldn't Win!"

NORTH KOREA KEEPS DICTATORSHIP IN THE FAMILY: Kim Jong-il dies of a massive heart attack (a blow to atheism) and his son is appointed North Korea's next megalomaniac. Here, Kim Jong is pictured during his final days, sitting inexplicably nude before a scatter of spent beer cans. [Rule of thumb: If you are a notorious dictator who dies, it is not too soon. You may be made fun of immediately upon your passing. You're next, Castro. Waitin' on you!]