COULD SOMEBODY PLEASE GIVE HANLEY RAMIREZ A CLUE?: The suddenly free-spending Marlins are the talk of the town. Even not getting Albert Pujols, Miami has signed shortstop Jose Reyes, closer 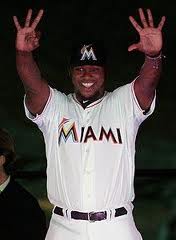 Heath Bell and starter Mark Buerhle, has an offer in to starter C.J. Wilson, and may yet pursue first baseman Prince Fielder. No club has been more active or improved more, the metamorphosis of the entire franchise a stunning thing to behold as I write in this column today. It's all bells 'n whistles and upbeat notes but for that one clanging, dissonant sound. That would be Hanley Ramirez (pictured in a happier moment). The Marlins' high-strung, needing-to-be coddled incumbent shortstop balked this week at moving to third base to accommodate Reyes, and now suggests through his agent that a "restructured" contract -- i.e., a lot more money -- might ease the move for Hanley. The club in turn is upset, as it should be, and reportedly is exploring trade options. Earth to Hanley: What an opportunity you are missing here. You have a chance to remake your image, to be seen as a magnanimous team-first player, to become a true team leader and to gain the popularity of fans who have never fully embraced you. Instead you are only underlining your reputation for petulance and a me-first attitude. The worst of all this is that is smacks of ego. Giving up your position to a man signed for more money than you are making evidently is too much for the ego to bear. Somebody should remind Hanley that, across town, Dwyane Wade agreed to a cut in salary last year so the Heat could sign both LeBron James and Chris Bosh. Hanley, your deal averages $12 million a year. If that isn't enough only because Reyes is making more, that isn't a fairness issue, that is an ego issue. Meanwhile the idea of trading Ramirez is worth exploring, but I would do it only for compelling value in return, something that suits a Marlins need. I would trade him straight up for Washington all-star 3B Ryan Zimmerman, for example. I would not trade him for prospects. The best situation is that Hanley swallows his pride and becomes the team player he has never quite managed to be. Of him, alas, that is a lot to ask. OK, enough of me venting. Your turn. Take a dip in our poll and say why you feel as you do.

HEAT LAND SHANE BATTIER: The Heat has agreed to terms with free-agent 6-8 small-forward Shane Battier, late of the Memphis Grizzlies. Battier himself at 9:42 this morning Tweeted, "Let's Go Heat!" He is 33, reiterating Miami is all about winning now. Getting Battier signals the end of Mike Miller here. Battier will play the same reserve swingman role, lending not as much offensive spark perhaps but clearly better defense. Heat's FA priority now should be help at center (Samuel Dalembert too pricey, Greg Oden too injured) and maybe point-guard help for Mario Chalmers. 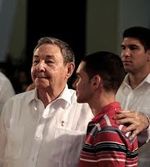 HAPPY BIRTHDAY, ELIAN: Elian Gonzalez, the small boy taken from his Miami relatives in 2000 and returned to Cuba, just turned 18, and is seen here in the embrace of Cuban president Raul Castro. I'm not sure what Elian wanted for his birthday, but if he wanted to be a propaganda pawn for the Cuban government, his wish came true!

MADONNA A CLASSIC NFL CHOICE FOR SB HALFTIME: Madonna (whom I like to call Lady Gaga's mother) is 53 (at least) and last had a song top the American pop charts in 2000. She is both legendary and on the far side of her popularity/relevance arc. Which, of course makes her the quintessential NFL pick for a Super Bowl halftime performer, joining the parade of recent choices including The Who, Bruce Springsteen, the Rolling Stones and Paul McCartney. The NFL's halftime mindset calls to mind the name of a song I like from the Rocky Horror soundtrack: Time Warp.

NICK SABAN: WARM AND FUZZY INDIVIDUAL: Former Dolphin Heath Evans tells a story embodying the warm good nature of coach Nick Saban. Click here for the tale. The one point I might dispute: If at any time Jeno James was the Dolphins' best offensive lineman, this franchise was in worse shape we thought.

ME, PICKS: I went an OK 10-6 straight-up last week on my Friday NFL predictions page but a sterling 12-4 against the spread. The latter ties my all-time best for ATS wins in a week. Details coming, happily, on this Friday's page.

ME, FANTASY: Greg's Lobos set a season-high for points last week in winning, 197-146, with six players topping 20 points led (as usual) by Aaron Rodgers' 39 points and 30 from Maurice Jones-Drew. At 4-9 I enter the final week of our fantasy regular season with a slight chance to still back into the playoffs. I need one other team to lose, me to win and then win a tiebreaker.