[1. You can still vote in our Tony Sparano firing poll in post directly below this newest one. 2. Signs we're a big-time sports town: Marlins introducing Jose Reyes and Heath Bell and Heat making available Pat Riley just hours apart today. 3. Give us a follow on Twitter at @gregcote]

SETTING THE BAR ON HEAT EXPECTATIONS: The Heat's first of 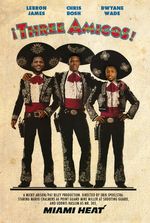 two exhibition games is Sunday here vs. Orlando prior to the lockout-delayed, truncated NBA regular season opening Christmas Day in Dallas. Close enough now to set the bar on Heat expectations and what will define "success" for Miami's Big 3 era launching Year 2 after last season's loss in the Finals. Miami is favored again to win it all (see below), so fan optimism goes without saying. The question: What must Miami's Big 3 accomplish overall to have fulfilled expectations in your mind? Take a dip in our poll and say why.

NFL PREDIX: Sometimes, against logic, you just get a gut feeling, you know? Hence my picking the Dolphins to lose at Buffalo on Sunday. Click on Week 15 Gems for that and all our latest picks, and on Judging Ireland for my Friday Page NFL column on why Dolphins GM Jeff Ireland wasn't fired, and the defining onus upon him.

ON BRIAN BILLICK: The former longtime Baltimore Ravens head coach (1999-2007) says the Dolphins job opening interests him. The interest should be reciprocal. Billick, 57, has enough on the resume' -- an 80-64 career record including a 2000 Super Bowl ring -- to merit consideration. (Here comes the "yeah but"). But his teams made the playoffs only twice and were 0-2 his final six seasons, so we're talking diminishing returns. The question for owner Stephen Ross: Is a man out of coaching four years who last won a playoff game in 2001 the best you can do? I'd like to think not.

'BORDERLINE BEAST': Dolphins receiver Brandon Marshall has filmed a documentary called "Borderline Beast" about his struggles with Borderline Personality Disorder. The doc will be out in spring of 2012. Click here for a 1-minute trailer.

LAMAR MILLER ROLLS THE DICE: The Miami Hurricanes' gifted running back is leaving UM (and Al Golden) for the NFL draft two seasons sooner than he might have. Attention is on what NCAA penalties might await The U in the Nevin Shapiro scandal, but the early attrition of guys like Miller is the steady coach-killer. Miller is gambling that another productive UM season wouldn't substantially raise his draft stock. Right now Miller is judged a borderline/low first-round pick, ranked 29th overall, for example, on Todd McShay's latest ESPN.com list of top 32 prospects. WHY RYAN BRAUN MATTERS: I have read it posited that Ryan Braun's positive drug test is no big deal. Wrong. If true it is a big

deal, literally as well as symbolically. First it would taint the former Miami Hurricane's 2011 MVP season with the Brewers. It would mean a possible 50-game suspension and permanently tarnish the "Hebrew Hammer's" reputation. More broadly, it would be an indication that the sport's infamous steroids/PEDs era didn't end with the Bonds/McGwire generation but continues. It would mean we can't trust baseball or its players yet. The assumption of Braun's guilt exemplified in this cartoon might be unfortunate and harsh, but it's reality: Don't want to be assumed guilty, players? Then don't fail a drug test.

SAM HURD, PROFESSIONAL A--HOLE: He's the Chicago Bears receiver facing federal cocaine trafficking charges, and if the accusations are true he's the worst kind of drug dealer. It is one thing to be involved with that out of sheer poverty and desperation (still wrong), but somehow worse when someone of ways and means gets involved. What, Sam? The fame and riches of playing in the NFL weren't enough? Loser.

JERRY SANDUSKY'S GAMBLE: The disgraced former Penn State defensive coordinator pleading not guilty to sexual-abuse charges and seeking a jury trial looks like a severe risk, given the parade of accusers and the eye-witness testimony of Mike McQueary. The plea allows Sandusky to continue to play falsely-accused, for now, but finding a sympathetic jury won't be easy.

'THE PROTESTER': Ever since getting terrible service once on a visit to my local Too Jays deli, I have had a personal boycott of that restaurant. I believe that makes me Time magazine's "Person of the Year."

MILEY CYRUS' BREASTS: This recent appearance on the red carpet has fueled speculation that Miley Cyrus has had breast implants, which she denies. Great debate ensues. I personally don't give a crap, but since she's over 18 and my wife isn't looking I pass along this photo for purely educational purposes.