[1) Remembering Pearl Harbor on its 70th anniversary. 2) Musical treat: Click here to see and hear Paul McCartney and Ron Wood performing "Get Back" in London this week. 3) See results of latest Dolfan Satisfaction Meter poll in blogpost directly below this. 4) Click on A Reminder of Better Times for my column off Raiders game. 5) Join us on Twitter @gregcote]

NOBODY IS HOTTER THAN US (I SAID NOBODY!) Swaggering South Florida preens like a peacock in professional sports today, and why not. No city in America is hotter than Miami right now in the BIg Four

sports. Consider: 1) Marlins are the talk of baseball for the right reasons, adding former Mets star shortstop Jose Reyes, ace closer Heath Bell and starter Mark Buehrle -- and then a serious push for Albert Pujols -- to a team already featuring Mike Stanton, Hanley Ramirez and Josh Johnson. The new ballpark will see a team of huge promise, a playoff contender. 2) Heat are the betting favorites to win the NBA championship in Year 2 of the Big 3: LeBron James, Dwyane Wade and Chris Bosh. 3) Panthers are in first place in the NHL Southeast Division, in case you hadn't noticed. The retooled Cats are playing the best hockey we've seen down here since 1996. And 4) Dolphins have won four of their past five games and are playing, right now, at a playoff-caliber level. Pictured left, Reyes rocking the new hat and LeBron eyeing a championship. Pictured right in action: Reggie Bush and Stephen Weiss. "Miami: Don't Touch Us. You Might Get Burned."

QUIET DOWN, GROUSERS. LSU-'BAMA IS THE RIGHT TITLE GAME: Love this time of year. The holidays? 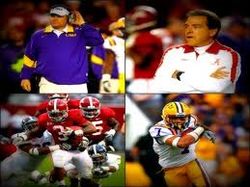 That, too. But I meant BCS-bashing season. I'm a rarity. I think the BCS usually gets it right, and did this time with No. 1 LSU vs. No. 2 Alabama in the Jan. 9 championship game. This season's obligatory National Seat of Outrage is Stillwater, Okla., where fans of No. 3 Oklahoma State are assigned the annual We Wuz Robbed! role. You weren't Cowboys. You aren't as good as Alabama. That's why The AP poll and also the USA Today/Coaches poll also had you third just like the final BCS rankings. I have no doubt LSU and 'Bama are the two best teams in this 14th season of the BCS and sixth straight year an SEC team will reign. Nor does a "rematch bowl" bother me, the fact LSU beat Alabama 9-6 in OT on Nov. 5. Some complain that a Crimson Tide win next month would leave an unsettled feeling, as if they should play again and make it a best-of-three. Nope. This game is what it should be: Two best teams. Winner take all. No one claiming a shred of sanity can argue against unbeaten LSU in the title game. The fair debate is whether the Tigers should be playing Alabama (again) or if Oklahoma State is deserving. Vote now and say why.

Other bowls I care about, in chronology: FIU-Marshall Dec. 20 in St. Petersburg; FSU-Notre Dame Dec. 29 in Orlando; Florida-Ohio State Jan. 2 in Jacksonville; and West Virginia-Clemson Jan. 4 in Miami (because it's the Orange Bowl, not because the matchup scintillates).