[1. Merry Christmas eve, Christians! Happy holidays, others! Join us on Twitter @gregcote. 2. You can still vote in our "No Matt Barkley -- What Next" Dolphins poll in post directly below this. 3. Heral'ds Heat special section is out today and I contribute this column on impact of Udonis Haslem's return to health]. 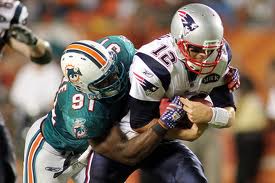 88.7 passer rating is fifth in the AFC. That, coupled with USC's Matt Barkley excluding himself this week from the upcoming NFL draft, make the final two regular-season games very interesting for the Dolphins at the QB position. It had been all but a given that Miami would target Barkley in the first round. Now, without that option, with Andrew Luck out of play, with a trade-up for Robert Griffin III costly and with the Colts claiming they won't trade Peyton Manning, options have been limited. Unless Miami is enamored of Landry Jones (I hear otherwise) or a lesser-regarded collegian, it would seem increasingly likely Moore might go into 2012 as the starter-designate if he continues to impress in the final two games. Beyond that audition element today, I give Miami a decent outright upset shot at New England and think they'll beat the 10-point betting spread. Think the Dolphins can do plenty with the ball against a pretty generous (read: bad) Pats' defense. But ultimately I also think Tom Brady aiming at Wes Welker and Rob Gronkowski will be too much. Pick: Patriots, 30-23.