LeBron, D-Wade shine as Heat unwrap big win for Christmas!; plus holiday video greeting from me to you & more

Courtesy one of my musical heroes, Brian Wilson, we bring you the original 1963 version of "Little Saint Nick." It is nothing like the later version heard on radio. Click here. Enjoy. 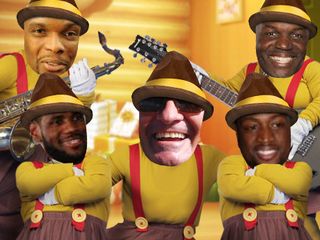 OUR CHRISTMAS VIDEO-GIFT FOR READERS WHO'VE BEEN GOOD: Recently I got together with the Heat's Big 3 -- Dwyane Wade, LeBron James and Chris Bosh (thanks for the time, guys!) -- to record a video to the tune of "Rockin' Around the Christmas Tree." The fifth man in the vid, upper right in the photo, is Dolphins interim coach Todd Bowles. The bad news here? The annoying helium singing of The Chipmunks. The good news? You get to see LeBron in an Alpine hat. Click HERE to watch and listen. And a serious thanks and Happy Holidays to all my loyal readers and blog family!

HEAT OPEN BIG IN DALLAS: One team raised the championship banner. and then the team that will do it next won, 105-94. Anybody who watched the game knows the final score flatters Dallas. Heat thoroughly dominated, led by as many as 35 points in the third quarter. LeBron James' 37 points and Dwyane wade's 26 led a free-flowing offensive effort. ..... Original post: What else is there to say? This: The Heat will watch the Mavericks and their fans celebrate the NBA championship won at Miami's expense last season, and then the Heat will whip the Mavs and verify where the best team in the league lives. 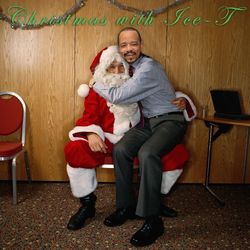 THE LIST: DOLPHINS' 10-LOSS SEASONS: Saturday's defeat at New England meant the eighth 10-loss season in 46 franchise years. Let's mark the seasons gone most to L, chronologically, with the accompaniment of a photo of Ice-T sitting on Santa's lap:

*-With one game to play.