Urgent Bulletin: Miami Beach has been named (click here) the "Most Tattooed City in America." Join me in swelling with parochial pride! 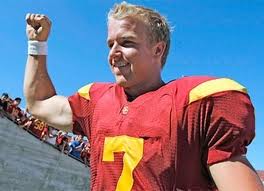 season rather than enter the April draft. Nowhere should the news hit harder than in Miami, where Barkley was the Dolphins' leading draft option in the first round. (Barkley is pictured, preparing to punch the Dolphins in the nose with his right fist). Just hours earlier Thursday, ESPN.com's Todd McShay in his first mock draft had Barkley going 8th overall to the Dolphins. A club source had indicated to me that Barkley was the Dolphins' "realistic preference," understanding that coveted Stanford QB Andrew Luck almost certainly would go No. 1 overall to the Colts. Discounting the possibility of getting Luck, here is what the sudden elimination of Barkley could mean to Miami in rough order of likelihood: 1. Dolphins take aim now at Baylor's fast-rising QB Robert Griffin III, although Barkley's decision increases Griffin's value and makes it more likely Miami would have to spend big for a trade-up to get him. 2. Miami settles for Oklahoma QB Landry Jones, whose stock has fallen but who also will now be more coveted with Barkley's decision. 3. Dolphins de-emphasize the necessity of spending a first-round pick on a QB and stick with incumbent veteran Matt Moore (perhaps challenged by Chad Henne) for the immediate future. 4. Miami increases its interest in acquiring a proven veteran -- perhaps even Peyton Manning. Nothing ever seems to come easily for the Dolphins, right? Barkley's decision is the latest in Miami misfortune. How would you now advise the Dolphins if you could? Vote and say why.

NFL PREDIX: DOLPHINS BEAT SPREAD BUT NOT PATS: Have you noticed neither of the NFL's two best

teams play defense? The over/under on a Packers-Patriots Super Bowl (*-see below) might be mid-50s. I look at the way New England doesn't stop the run or pass and give Miami a big chance Saturday -- to cover, not to win. Tom Brady, at home, in December, is good enough to overcome both the Dolphins and his own D. Click on Week 16 Gems for all my latest NFL picks, and on Bad Week for Marino, 'Next Marino' for my Friday page column. Bad week for Dolphins QBs past and future as Dan Marino prepares to wave goodbye to his season yardage record and current club loses its most likely draft target in Matt Barkley. (*-Latest SB odds from Bovada.lv: Packers 9-5, Patriots 4-1, Saints 6-1, Ravens 10-1).

Publishing today/Saturday is The Miami Herald's Heat special section. My contribution: This column on Udonis Haslem, the quiet glue that keeps the stars aligned. Heat's biggest improvement over last season will be Haslem's return to full health.

LEBRON UNSEATED AS "MOST DISLIKED" IN NBA: A new Forbes poll (click here) anoints Kim Kardashian-dumper Kris Humphries as the NBA's most disliked player, with LeBron James second. Personally, my esteem for Humphries grew exponentially as he sought escape from the Kardashian asylum following a brief marriage. Kobe Bryant, Tony Parker and Metta World Peace (likely for the name only) round out the top five. Surprisingly: Heat's Chris Bosh and Dwyane Wade are 6th and 9th, respectively. Must be the proximity to LeBron causing residual dislike, a sort of second-hand-smoke effect. 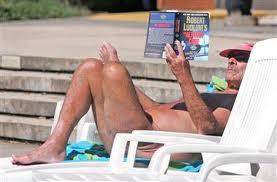 FLORIDA IN THE NUDE: It has come to my attention that Pasco County north of Tampa wishes to position itself as a destination mecca for European nudists. Click here for the tail tale. My general if limited impression of naturists is that most of the folks who'd rather be naked (see photo) are people I'd much prefer to see clothed.