« Dolfan Satisfaction Meter: 58.5% | Main | Sparano needs miracle; might Canes also need one to keep Golden? (with poll); plus Wrangler, Favre rip off The U & more »

[Note: See latest results of Dolfan Satisfaction Meter in blogpost directly below this one. Also, join us on Twitter @gregcote]

UM MADE RIGHT CALL. DID CANES' SENIOR CLASS REALLY DESERVE BOWL GAME, ANYWAY?: Miami became bowl-eligible at 6-5 Saturday and on Sunday withdrew itself from bowl consideration -- which might be

shocking but for the circumstances that make it the right call. The circumstances, of course: The ongoing NCAA/Nevin Shapiro investigation. The self-imposed ban is a smart strategy and the right call for many reasons. Mainly, it will mitigate in UM's favor as the NCAA weighs penalties of its own. Also, even with a 7-5 record it would have been a lousy or at least minor bowl anyway. One also could argue (and I do, right here) that the Jacory Harris-led senior class ostensibly being penalized didn't do much to deserve a bowl reward anyway, either on the field or as the team leaders under whose watch the Shapiro manure continued to spread. Swallowing a self-imposed bowl ban now theoretically will mean UM will be bowl-eligible in a future season a year sooner than it otherwise might have been. Coach Al Golden (pictured) said he supports the school's decision. But I also understand many fans might disagree with the bowl-ban, feeling that UM seniors earned this bowl and that fans deserve to enjoy a bowl experience this season expressly because likely NCAA sanctions are ahead. How do you feel? Take a dip in our poll and say why.

STEWART WINS ONE FOR THE AGES: Tony Stewart talked a good game and drove a better one. And NASCAR and Homestead-Miami Speedway got an instant-classic finale Sunday with the audacious Stewart outdueling points leader Carl Edwards to win his third career season crown in a 1-2 finish. What a race! I'm a casual race fan, not a gearhead, but this was exciting. Click on Tony the Tiger for my column off the race. NASCAR needed somebody to break the rather boring Jimmie Johnson dynasty, and Stewart has the attitude and personality, the resume' and the racing chops to make him the right man.

LEBRON, D-WADE'S 'HOMECOMING TOUR': With the NBA lockout dragging on endlessly and annoying the crap out of everybody, Heat's LeBron James and Dwyane Wade have pairted with Carmelo Anthony and Chris Paul to headline a four-game Homecoming Tour Dec. 1 in Akron (James' home), Dec. 4 in New Orleans (Paul), Dec. 7 in Chicago (Wade) and Dec. 10 in East Rutherford, N.J. (Anthony). I find two things interesting about this tour: 1) Will leftover Cleveland animus make for any hostility in Akron? And 2) Three of the four headlining players have last names that also are first names: James, Paul and Anthony. Actually, Wade also can be a first name, too. At least Wade Phillips' parents thought so. 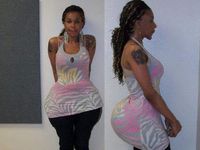 FAKE DOCTOR FIXES WOMAN'S FLAT BUTTOCKS: Here is yet another only-in-South Florida tale that reads like a chapter in a madcap Carl Hiaasen novel. A fake doctor who happens to be a transgender female and a woman desiring buttocks augmentation intersected and the unhappy result was that the faux-MD injected Fix-a-Flat into the woman, resulting in what is pictured and nearly killing her. Story here. (Raise your hand if you remember when most women thought their a--es were too big). I cannot confirm this but I heard that when the victimized woman was asked about the symptoms of having a Fix-a-Flat derriere she replied, "I feel tired."